Four years ago Jonathan Bird and I posted a series on the neighbourhoods of Vancouver. We are offering them again, with demographics from the latest national census and some other updates. We begin with a particularly historic area.

Sunset is one of Vancouver’s most ethnically mixed and family-oriented neighbourhoods. Germans moved into the area as it built out following the Second World War. Then it became a Sikh (Punjabi) enclave, and now Chinese and Filipino immigrants predominate. Many of these newcomer families struggle economically and socially.

From the 2016 Census, custom order for City of Vancouver Local Areas (comparative data for the Census Metro Area in parentheses). 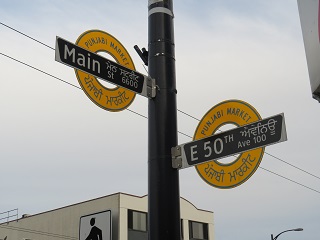 Immigrants comprise a large majority in Sunset, yielding the third highest rate of ESL speakers in the city. The city’s street signs along south Main St proclaim the area as ‘Little India,’ but Punjabi speakers are moving to Surrey and Abbotsford, being replaced with Anglos and immigrants from China, the Philippines and Vietnam.

Although poverty rates and household incomes are not far off the city’s median, Sunset consistently has some of the highest incidences of child vulnerability as measured by UBC’s Human Early Learning Project. More than half of the homes in this moderately dense area are duplexes or small apartment buildings. Sunset was one of the first communities to be settled in the Vancouver area. The District of South Vancouver was incorporated in 1892, stretching from Boundary Road westward to Point Grey, and northward from the river to 16th Avenue.

The Village of South Vancouver grew around the southern ends of Main and Fraser Streets. (Brewers Park, between Commercial Street and Victoria Drive north of Kingsway, is named after South Vancouver’s first reeve, W.J. Brewer.)

German immigrants: The aftermath of the war brought an influx of German immigrants to Sunset, who founded quite a number of churches – Mennonite, Mennonite Brethren, Lutheran, Roman Catholic and Baptist.

David Ley, professor emeritus at UBC’s Department of Geography, co-authored a study detailing the under-appreciated role these (and other immigrant) churches had in providing vital settlement services. Recently, those same churches have grappled with Vancouver’s new multicultural reality.

South Asians: Probably the most obvious characteristic of the area over the past 40 years has been the high concentration of Punjabi-speakers (mostly Sikh).

The Khalsa Diwan Society moved into its gurdwara on Ross Street in 1970. Its original home had been built in Kitsilano in 1908 and is believed to have been the first Sikh place of worship in North America. 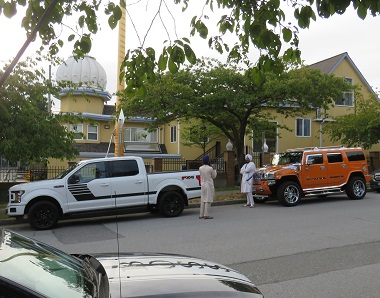 On the other hand, the church has not grown very much among Indian immigrants, even though Punjabi speakers are the largest foreign-language group in the metro region. One branch of Punjabi Masihi Church meets at Sherbrooke Mennonite, Asian Church of Christ meets at Peace Church on 52nd and Acts 29 meets at Pilgrim Baptist.

However, the market is now a shadow of its former self as many stores have moved to the Newton area of Surrey, which has become the centre of the Sikh community. The percentage of Punjabi speakers dropped from 26 to 19 percent between 2006 and 2016. Industrial zone: Vancouver’s economy still rests on heavy industry, especially natural resource products from the Interior – although that is not nearly so evident now as when sawmills, shipyards, docks and train yards dominated False Creek.

Recognizing the value of industry to the city’s overall economy as well as the progressive loss of ‘blue collar’ jobs in the city, city council voted in 2009 to protect the industrial zone along the Fraser River in Marpole and Sunset. 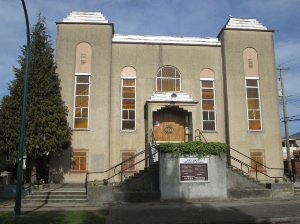 Peace Church on 52nd was founded by German-speaking Mennonites, but now holds services in English and Spanish.

* Peace Church on 52nd works closely with the Mennonite Central Committee, offering office space in their Activity House for its Refugee Office, Immigrant Resource Centre and New Beginnings Program, which helps newcomers learn budgeting and financial planning. Many members volunteer at the nearby MCC Thrift Store on Fraser Street.

* Vancouver Chinese Baptist Church, which is celebrating its 50th anniversary this year, offers free weekly English classes which are open to the community, and members of their prison ministry have visited two correctional institutions for more than 20 years.

The City of Vancouver has a Sunset page.

← Interveners in transgender case appeal for prayer, as well as justice
Citizens for Public Justice, ARPA Canada and others offer election guidance →