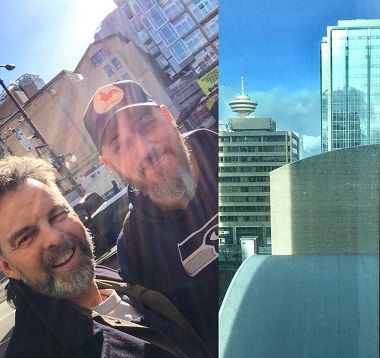 24-7 Prayer – a worldwide non-stop prayer meeting that began in England in September of 1999 – could be dismissed by the cynical as mere novelty or technique, an exercise in putting a brand on something that Christians do already.

Dig a little deeper, however, and you will discover an infectious and transformative movement of the Holy Spirit that aims at nothing less than reviving the church and rewiring the culture.

We live in a dislocated, distracted, disenfranchised and despairing time. People long for genuine encounters with transcendence, but have lost faith or touch with most of our trusted guides.

More programs and personalities and products simply cannot fill this void. Even prayer, which seems to the religious-minded the most hopeful answer, can seem shallow, dry and ineffectual.

No good at prayer

This is the situation that Pete Greig found himself in the summer of 1999. His second church plant in Chichester was thriving, he was getting some serious national exposure and people were asking him about his model for success.

But in the dark silence of the night he was nervously asking himself: “Will I be one of those who does a lot for Jesus, but at the end of it all never really even knew him?”

He suspected the answer might be found somewhere in prayer, but he also knew that he wasn’t any good at it. So he and his church had a brilliantly simple idea: they would pray about it. Taking their cue from the disciples, they would ask the Lord to teach them to pray. Heeding Jesus’ story about the persistent widow, they would do so in a way that refused to stop praying until they got an answer.

Following the model of the 18th century Moravians, they would organize a day and night rota of prayer in one location. After three months in the prayer room, filled with miracles, art, music, poetry, salvations and deeper hope than they had ever felt, they decided to offer the idea to a larger group of Christian leaders and churches. They hoped they might be able to fill a year of unbroken prayer across the United Kingdom.

Eighteen years later, 24-7 Prayer has inspired continuous prayer in over half the countries around the world. 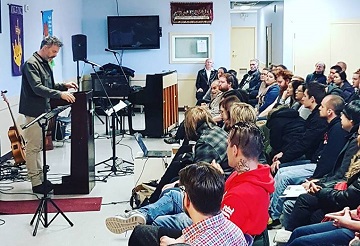 Pete Greig speaking to 614 Vancouver at the Anchor of Hope Community Church in the Downtown Eastside.

Pete Greig came to Vancouver this past weekend to speak at the Worship Central Conference, and to meet with local churches and the leaders of 24-7 Prayer Vancouver.

24-7 Prayer has been operating in Vancouver since 2004, when a small group of Christians began praying non-stop in room 504 of the Empress Hotel, at the corner of Main and Hastings.

That prayer season lasted three and a half years, and then moved location to a former crystal meth lab, then to a drop-in centre, over to the basement of an old bank and very soon to a community house in the Downtown Eastside.

Others in Vancouver have experienced 24-7 Prayer through prayer rooms at conferences and Missions Fest, the six-week 24-7 Prayer / Alpha Prayer Course, nights of prayer, and through Pete Greig’s books, Red Moon Rising and Dirty Glory.

Pray at all times

It should be evident that 24-7 Prayer imagines prayer in a slightly different way. Greig described an hour in the prayer room as the one hour in the day when you might not be “praying.” It is the hour when you re-orient your entire self on Jesus, so that you become a walking, talking, breathing and living prayer room for the other 23 hours of the day. 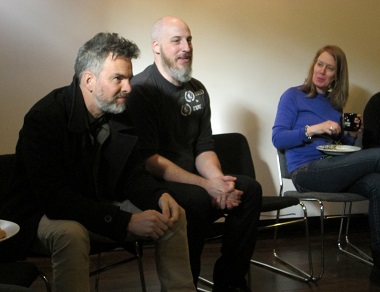 This intimacy of course is not simply an individual matter. Communities – churches and houses of prayer – have always been born out of a communal dedication to intimacy with God. All of our churches and denominations were born out of deep, committed, persistent prayer.

24-7 Prayer exists in part to bless the church as it prays, and to help foster new communities that form around rhythms of prayer, because “the church is God’s primary agent for proclaiming and demonstrating the good news of Jesus Christ.” (George Eldon Ladd)

This good news cannot – must not – be contained within the walls of the church. This is why 24-7 Prayer also emphasizes the “re-wiring of culture.” It aims to locate prayer in unlikely places, places where faith meets culture and causes some sparks to fly.

We have seen 24-7 Prayer rooms in youth drop-in centres, prisons, parliament buildings, class-rooms, refugee camps, cathedrals, shelters, gardens and more. There is simply no place where we cannot pray.

This commitment to #prayeverywhere helps us to see the world with vision that is transformed by the presence of Christ, and helps ignite a passion for justice that emanates from not from outrage, anger, self-righteousness or the desire to be on the right side of history.

Meeting God in prayer inspires people to go out and meet God in mission and in justice, which then cause us to want to come back and meet with God some more in prayer.

24-7 Prayer Vancouver is starting two new prayer rooms in Vancouver, and is excited to speak with churches, organizations and individuals about how we can join in relational and strategic prayer across Metro Vancouver.

Aaron White leads 24-7 Prayer Canada and is part of the 24-7 Prayer Vancouver leadership team. He is also ministry director of 614 Vancouver.