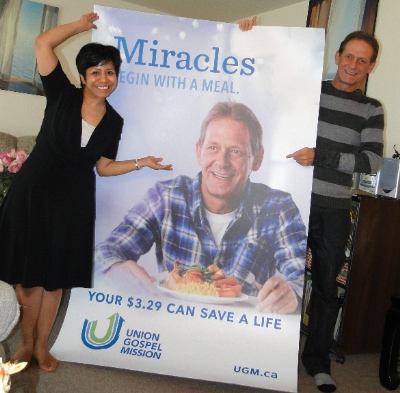 John and Elsa Oakley with the Union Gospel Mission bus advertisement that helped to bring them together.

The first time Elsa Oakley ever laid eyes on her future husband was when she saw his face on a Union Gospel Mission bus advertisement. His handsome smile stayed in the back of her mind when she was given an opportunity to volunteer at UGM with her church group.

John Oakley came to UGM to break free from addiction, to turn his life around and to learn how to love God and himself. He had no idea that this place would also lead him to the love of his life.

Only a few short years ago, John thought he would never win his 24 year battle with drug and alcohol addiction. John began drinking at age 10 to help him cope with an unstable home life and an alcoholic parent

After an earlier failed attempt at recovery, John says he felt God speak to him, giving him the courage to call a detox centre. After an excruciating 10 day wait, John enrolled in UGM’s recovery program in July 2008. It helped John get his addiction under control, gain employment at UGM, and eventually led him to his soul mate. 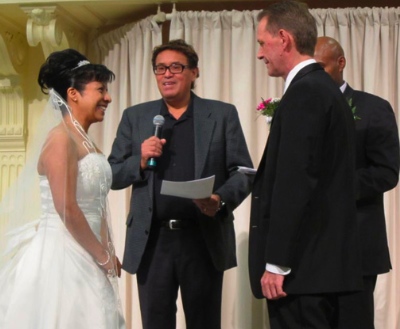 Three years after first meeting, John, 56 and Elsa, 40 are more in love now than ever.  John’s former struggles allow him to truly appreciate the love he has today.

“He doesn’t wait until Valentine’s Day to be romantic,” says Elsa, who was a veterinarian in Mexico.  “That’s what I love about him. I’ll come home some days and there will be a rose or a potted plant sitting on the table with a card saying how much he loves me. That’s a regular thing with him.”

From the moment John and Elsa first met in December of 2010, they had an undeniable connection. They bonded over their faith, an interest in UGM, and a big heart for kids.

After three weeks of dating, John took Elsa to Coastal Church, where John attended. “We went to the sanctuary and we were just praying and talking,” John says. “I looked up at her and told her I planned to marry her right on that stage. When I was leaving I had a vision of her in a white dress and a flower in her hair, and I just knew that this is what God had planned for me.”

Like any good love story, however, there was no shortage of dramatic events. The two had barely started dating before it was time for Elsa to return to Mexico. They skyped daily for 18 month, and in that time John indeed proposed. They booked their wedding in Canada, but visa complications that kept Elsa in Mexico threatened to ruin their plans. Fortunately she secured a permanent visa and made it back to Canada just weeks before their wedding. 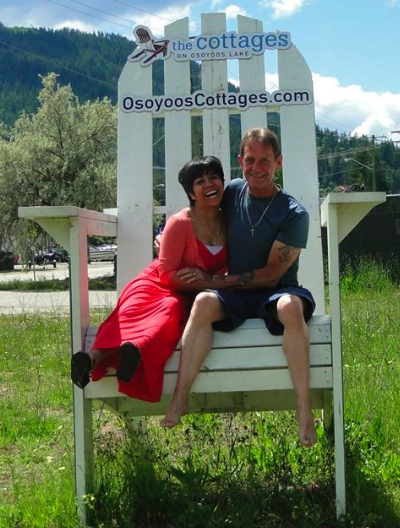 Elsa and John on their honeymoon. They are looking forward to starting an orphanage and church in Mexico.

On November 17, 2012 surrounded by family, friends, and their UGM family, Elsa and John got married at Coastal Church.

“UGM is our family,” John says. “I feel blessed for every day that I get to spend with my wife and that UGM brought us together.”

Union Gospel Mission still plays a large role in their relationship today. Both Elsa and John spend much of their time at UGM. John works as a ministry support worker and at the front desk, while Elsa volunteers at UGM’s Women and Families Centre, fostering her love of working with children.

With encouragement from his wife, John is also able to attend classes at Christ College. In the future, they hope to open an orphanage and small church in Mexico.

“We’ve met with lawyers and Elsa has already looked at land,” says John, who adds that they have already received pledges for their ambitious dream.

For now, the Oakley’s are happy spending time together in church, picnicking in Stanley Park, or training for an upcoming 21K run.

Through its seven locations in Metro Vancouver and Mission, Union Gospel Mission provides counselling, education, safe housing and alcohol and drug recovery to those struggling with poverty, homelessness and addiction. The heart of the mission is to demonstrate God’s transforming love, ease the burden of the most vulnerable, rebuild the lives of the broken and offer dignity to those who feel cast aside.

1 comment for “A marriage made in heaven: John and Elsa . . . and Union Gospel Mission”