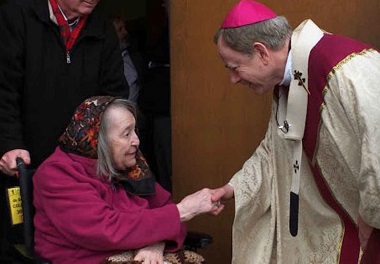 Archbishop Miller shaking the hand of a woman on the World Day of the Sick at Our Lady of Sorrows Parish February 13. Photo by Sammy Tong / The B.C. Catholic.

As health authorities in BC start to impose euthanasia in palliative and hospice care facilities, two things are clear: the government is mistaken in its policy, and we as a society are doing something wrong.

First, the Fraser Health Authority and other branches of government are making a serious error in imposing assisted suicide in departments dedicated to hospice and palliative care.

These units, and the compassionate caregivers who work there, are committed to making the final stages of life for the elderly, sick, and suffering meaningful and dignified. Assisted suicide stands in stark contrast, offering a false choice to end one’s life rather than be accompanied in one’s suffering.

The government needs to immediately halt any efforts to force access to assisted suicide in facilities where caregivers – whether family, friends or health-care workers or volunteers – selflessly attend to the sick and suffering.

As a community, we must also ask ourselves where and why we are failing to provide for and accompany those who are dealing with lengthy illnesses or approaching death. The fact that more than 2,000 Canadians have ended their lives with a doctor’s assistance calls us to action: we need to reach out to the suffering in our midst.

If the elderly, sick and suffering in our population feel that euthanasia is their best option, it means we as a society and as individuals are letting them down.

In nearly every case we can provide adequate pain management to comfort patients. But what about the lonely, the abandoned and those who see themselves as a burden to others or society? How do we address their needs and assure them that their life has meaning?

The Bible tells us, “Carry each other’s burdens, and in this way you will fulfill the law of Christ.” All of us, not only those who are caregivers, are called to act on Jesus’ teaching.

This is the greatest line of defence the church and society have for fostering an understanding of sickness and suffering that preserves human dignity to the fullest possible extent. When we care for the sick and dying, it stands in powerful contrast to efforts to promote assisted suicide as a response to suffering.

True compassion, as Pope Francis tells us, is an act of sharing. We are called to suffer with the sufferer, not to end his or her life.

In my recent homily for World Day of the Sick I thanked our caregivers for their “extraordinary ministry which brings blessings” not only to themselves but even more so to those whom they so patiently and sacrificially serve.

These men and women are an example for all of us – government and public alike – as we seek ever better ways to accompany the suffering, not to wash our hands of them with a lethal injection.

1 comment for “Archbishop’s statement on assisted suicide in hospices”