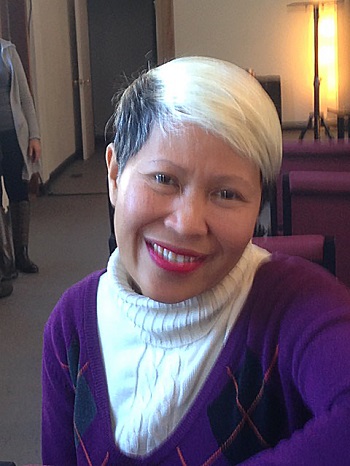 Amie Peacock would love to see a hundred small Beyond the Conversation groups around Metro Vancouver within a couple of years.

In 2015, Amie Peacock surrendered to God’s calling – whatever that might be.

“I said, ‘God, I’m going to give you my life. Obviously, you’re calling me for something. And, God, I am going to be just listening and being obedient to you,” she recalls. “At that time, he put the burden on my heart to work on social isolation.”

And so was born a new ministry that Peacock, a member of Cityview Church in east Vancouver, named Beyond the Conversation. Today it is a registered charitable society in British Columbia. Peacock is its founder and executive director, and two other Cityview members are part of its leadership team. Neil Parker chairs its board of directors and serves on its media relations team, and Jeff Groulx serves on its intentional one-on-one relationship-building team.

The ministry began in part out of a 2014 survey by the Metro Vancouver Alliance – a partnership of social advocacy groups, labour unions, and churches – that found the leading cause of social isolation among the region’s growing immigrant and refugee population was their inability to speak English. That was especially true among the elderly. It keeps them from making friends, building a support network, and integrating into Canadian society.

But that only confirmed what Peacock already knew first-hand.

“When my mother came to Canada in 2001 from the Philippines, I noticed that she was isolated, because she didn’t have the language, she was new to the country. She didn’t have the family, the friends, that she could really connect with,” she says.

Peacock’s mother returned to the Philippines after only six months in Canada, but not before the seed had been planted. “That pain that she felt,” she says, “got me to think that it’s not just my mother who was feeling this isolation, but also the greater population of seniors in Vancouver.”

The response to Beyond the Conversation was immediately positive. At its launch in November 2015, 95 seniors registered for the program.

But it soon became apparent to team members that if they were to succeed at ending social isolation, they also needed to address the stigma of mental illness. That’s because the two tend to overlap. Some people may become socially isolated due to a mental illness, while others may develop a mental health problem due to their social isolation.

Either way, Peacock says, “we want to make sure that people have a place where they can talk openly about their struggles.”

Beyond the Conversation now comprises 11 small groups, each facilitated by two trained volunteers. No two groups are alike. Some focus on learning basic conversational English, some focus on developing friendships and one focuses on current world events.

But for all of them, the end goal is to help people build community based on mutual trust: “The person who gets sick and is rushed to emergency,” Peacock says, “should be able to call their friends to maybe go and visit their cats. Someone has to be able to know what is happening. That’s the power of trust.”

Peacock says their “very ambitious goal” is to have a hundred small groups across Metro Vancouver within the next two years. “We believe that it can be done. We don’t have any funding at the moment, yet without funding, we were able to actually grow to the capacity that it is today.” They have also started making awareness presentations in high schools, and plan to take their message to colleges and universities this year.

On January 27, Peacock spoke about her journey and her ministry at Missions Fest to a packed-out room. She calls the experience both “nerve-wracking” – because she had been quite sick in advance of her presentation – but also “wonderful.”

Peacock credits her absolute reliance on God’s strength and power for all that she’s accomplished in such a short time. 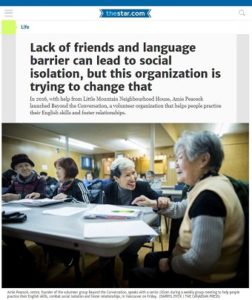 “He said to me in the very beginning of my ministry, ‘Amie, your job is to show my love. You are my feet, my hands, my eyes, my mouth, my heart.’ His job is saving souls.,” she says. “I show them Jesus’ love.”

Frank Stirk is a member of Cityview Church and wrote this article for their newsletter. It is re-posted by permission.

Beyond the Conversation has been featured in a number of publications lately, including Metro News Vancouver, CHEK News and the Toronto Star.