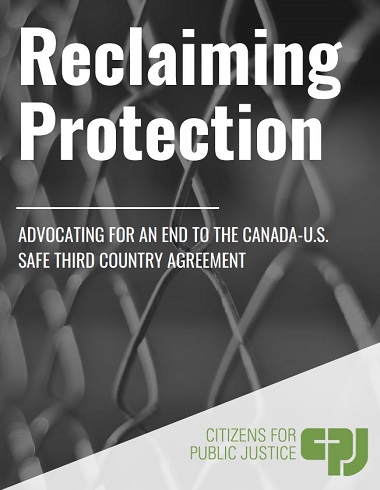 Last year CPJ created ‘Reclaiming Protection’ to oppose the Canada-U.S. Safe Third Country Agreement. Now they point out that Bill C-97 seeks to “essentially criminalize the right to make a refugee claim under the STCA.”

Based in Ottawa, Citizens for Public Justice (CPJ) is a Christian voice for social and environmental justice in Canadian public policy, focusing on poverty in Canada, ecological justice, and refugee rights. They released this statement April 10.

Citizens for Public Justice (CPJ) condemns the new changes to Canada’s refugee determination system outlined in Bill C-97, the Budget Implementation Act. CPJ stands alongside the Canadian Council for Refugees and other advocates who have expressed concern on these amendments.

Tucked away in the latest Budget Bill is a new ground of ineligibility for refugee claimants who have previously made a claim in another country. This omnibus bill combines different pieces of legislation concerning a wide range of issues that do not necessarily have anything to do with the budget.

It is apparent that this provision is clearly aimed at people whose refugee claims have been rejected in the United States and as a result, try to apply again in Canada.

By making such a general provision, the federal government has given in to anti-refugee sentiments that wrongly assert that refugees are exploiting a “loophole” in Canada’s refugee system, and that seek to essentially criminalize the right to make a refugee claim under the Canada-U.S. Safe Third Country Agreement (STCA).

These policy changes come amidst news that the government intends to expand the STCA  across the entire border. A move that would arbitrarily deny those in search of safety their right to make a refugee claim. The Canadian government is making an effort to stem the flow of refugee claimants who have been using unofficial border crossings from the United States to Canada.

The STCA has failed to uphold its purpose of promoting the orderly handling of claims. The agreement, as it stands now, incorrectly presumes that the United States is safe for refugees. As CPJ has stated previously, the failure of the United States to fully comply with many refugee obligations calls into question the legitimacy of the STCA.

We reiterate that there is no “loophole” for refugees and that Canada ought to rescind the STCA immediately.

Expanding the STCA will simply make the situation worse by denying refugee claimants a fair hearing, encouraging them to make more perilous journeys into Canada; and promote cross-border smugglers to profit from the vulnerable.

CPJ concurs with other advocacy groups who are of the view that such substantial changes to immigration laws must be given a full hearing in Parliament, rather than being concealed in a fast-tracked budget bill. The inclusion of such changes within Bill C-97 ensures that there is little room for consultation, debate, and analysis of the implications that will follow.

The approval of the budget bill will enforce regulations that effectively align Canada with the United States when it comes to refugee claimants. This is an affront on refugee rights that is bound to have far-reaching effects.

The provisions in Bill C-97 fundamentally shift away from Canada’s so-called “welcoming” attitude towards refugees.

CPJ has consistently called for more equitable treatment of refugees within our system. This attempt by the government to ignore the rights of refugees directly infringes on this advocacy.

CPJ produced a 14-page Reclaiming Protection document last year which made the case for ending the Safe Third Country Agreement. It has also prepared a one-page FAQ on the same topic.

Journey Home executive director James Grunau has recommended this article – Four myths about Canada’s border crossings – for those concerned about whether our refugee policies and practices are too lax.