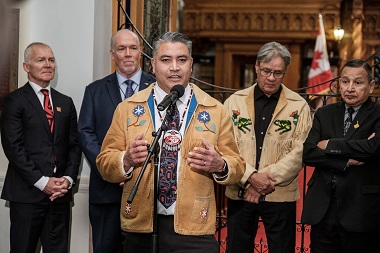 Last fall, BC was the first province to adopt the UN Declaration on the Rights of Indigenous Peoples into law. Photo from BC Government.

The Commission on Justice and Peace of the Canadian Council of Churches sent a letter to the Minister of Justice and Attorney General of Canada in support of the Government of Canada’s commitment to pass legislation to create a framework to implement the United Nations Declaration on the Rights of Indigenous Peoples [UNDRIP]. . . .

In the recent throne speech, the Government of Canada promised to introduce the legislation before the end of 2020.

The Honourable David Lametti
Minister of Justice and Attorney General of Canada
David.Lametti@parl.gc.ca

We write to express our support for the Government of Canada’s commitment to pass legislation that creates a framework to implement the United Nations Declaration on the Rights of Indigenous Peoples.

Our support for such legislation is framed and shaped by the following considerations:

We believe that building a new relationship with Indigenous Peoples by passing legislation to provide a framework for implementing the Declaration should be a non-partisan issue that warrants the support of all Parliamentarians. We urge the government to do all that is possible to promote constructive dialogue on this issue of such importance for our country and to ensure the development and passage of the legislation that is indeed built on the floor established by Bill C -262.