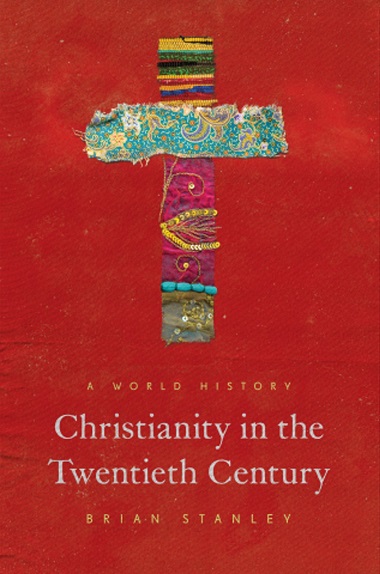 The twentieth century has proven to be one of the most remarkable and turbulent in the history of Christianity.

The old bastions of the faith, particularly Europe, witnessed steady decline in levels of religious adherence, especially during and after the late 1960s.

Meanwhile, Christianity, especially in its Pentecostal/charismatic expression, surged in the Majority World in places like Brazil, Uganda and South Korea, gaining converts and forcing established historic churches to either fortify themselves or adopt Pentecostal influences in their own denominations.

Brian Stanley’s Christianity in the Twentieth Century: A World History offers readers snapshots of Christianity in different parts of the world. Each chapter focuses on a different theme (nationalism, secularism, sexuality, ecumenism, human rights, migration, etc.) and is generally subdivided into four sections – an introduction, the theme expressed in area A, the theme expressed in area B and a conclusion.

For instance, Stanley examines the Christian response to both the Holocaust and the Rwandan genocide in one chapter while in another he looks at how Christianity has operated in Egypt and Jakarta, both predominantly Muslim nations.

Stanley hones in on many of the famous individuals and movements of world Christianity, such as the prophetic and evangelistic movements of William Wadé Harris and Simon Kimbangu, the African-Initiated Churches, liberation theology, and the Church in China. Yet I also gleaned many new insights as well, some of which were:

• In the tradition of Protestantism (and even Koine Greek), much of the success of Christianity in Korea was due to a reviving of Hangul, an alphabet that was looked down upon but employed by the majority of the Korean population over Chinese who also favoured Confucianism. The Protestant championing of Hangul paved the way for Korean nationalism.

• In analyzing the decline of religious commitment in France, Stanley suggests this was largely due to opposition by males to the Roman Catholic Church’s sexual ethic; the priests accused men of sin when they engaged in coitus interruptus and men, becoming resentful, responded by avoiding the confessional and hence attendance at the Eucharist (p. 87).

• Many faithful Roman Catholics bemoan the excesses of reform ushered in by Vatican II, among which was the elevation of the vernacular and the displacement of the Traditional Latin Mass. In the Chinese context, Stanley observes that, “it was the [Chinese Patriotic Catholic Association] Church, disconnected from the Vatican, which continued for a time to use the Tridentine Latin Mass, whereas the underground church, supposedly representing the ‘imperial’ interests of the Vatican, began to adopt Chinese liturgy in accordance with the Vatican II reforms” (p. 147).

• Some early supporters of the Nazi Party were influenced by Ignaz von Döllinger, the most outspoken critic of papal infallibility at the time of Vatican I. These “Reform Catholics” sought “a distinctively German style of being Catholic that contrasted with the ‘effeminate’ and Italianate religious culture of the ultramontanes” (p. 157).

• Stanley brought to light the fascinating missiological debates that broke out between Konrad Raiser (who would serve as General Secretary of the World Council of Churches) and Lesslie Newbigin. The former critiqued the “Christocentric universalism” that he detected among religious conservatives and advocated “a social and nonhierarchical doctrine of the Trinity grounded in the theology of the Greek Fathers” which would provide “the necessary resources for . . . a paradigm shift in the Christian understanding of mission,” while Newbigin contended that Raiser’s view separated “the activity of the Spirit from the work of Christ” (p. 194-96).

• Stanley brings to light fascinating accounts of how liberation theology arose in Palestine through the writings of the Anglican priest Naim Stifan Ateek, but diverged sharply with liberation theology in South America; the latter valorizes the Old Testament Exodus as key to providing hope for those oppressed by elites yet Palestinians, living under the thumb of Israel, do not find such inspiration in the Exodus. Additionally, Stanley asserts that the origins of liberation theology lie not in Roman Catholicism, as is typically supposed due to the enormous impact of Johann Baptist Metz, Gustavo Gutierrez, Leonardo Boff, and other Catholic liberation theologians, but instead in Protestantism. Stanley states “The sources of the new hermeneutical emphasis were Protestant ones, which is not surprising in view of the long history of Protestant exegesis of the exodus as an archetype of the deliverance of God’s people from bondage” which “can be traced back to John Calvin . . . In Gutierrez’s case, the debt to the Reformed tradition appears to have been quite specific: the channel was the Brazilian Presbyterian Rubem Alves” (p. 237).

• Stanley suggests that an ecclesiastical thaw began during World War I when Western European prisoners of war held by Germany interacted with and observed the religious practices of Eastern Orthodox Christians; what had once been entirely foreign became familiar and after the Bolshevik Revolution, Russian Orthodox believers were scattered, with many traveling West into Europe and North America. Related to Orthodoxy, the increase in nationalist fervor in the early 1820s led to the segmenting of Orthodox churches that were closely tied to their own ethnicities (p. 320). Additionally, the exchange of Christian and Muslim populations between Greece and Turkey in the 1920s uprooted believers who had existed in the latter country since New Testament times (p. 322).

Stanley is a careful scholar, not prone to triumphalist declarations nor unduly critical in his assessments of Christians in the past. As any good historian, he seeks to bring understanding to the reader, providing the contexts in which particular events arose and why Christians reacted the way they did. He pays evenhanded attention to both the West and the Majority World and his conclusion neatly summarizes the contents of each of the preceding chapters. I would rate this book 4.5/5, highly recommended!

Alex Strohschein will be graduating from Regent College with an MA in May. He is circulation coordinator at the college’s John Richard Allison Library and continues to work occasionally at Regent Bookstore.

This review first appeared on the Regent Bookstore blog and is re-posted by permission.

1 comment for “Christianity in the Twentieth Century: A World History”