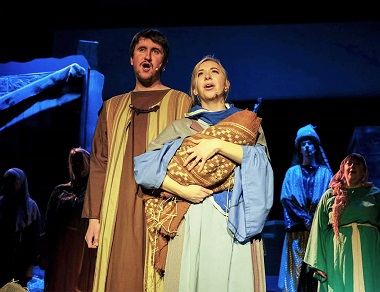 The pre-recorded nativity scene recalls the first Christmas in Bethlehem.

Christian Life Assembly is a big church, used to putting on big productions. This year, though, their Miracle on 56 Avenue has been reduced from a stage production to a drive-through experience.

But the church is taking the vicissitudes of the pandemic in stride, determined to focus on the timeless significance of the season rather than provincial restrictions.

A (sponsored) article in the Langley Advance Times states:

“We really wanted to provide Langley with a Christmas gift, we want to give hope for the season. Miracle on 56 Avenue is us presenting to our community a small gift during a very difficult season,” explains Pastor Derrick Hamre.

A receptionist at the church told me the production has “been very much scaled down this year . . . we’re trying to follow what Bonnie Henry says.” 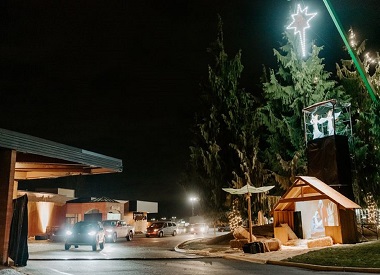 Viewers must remain in their cars.

The current version of the show lasts only about 90 seconds, as participants drive slowly around the large driveway:

The first ‘scene’ is a brief clip from A Charlie Brown Christmas where Linus explains to Charlie Brown the true meaning of Christmas. Following that is a pre-recorded nativity scene representing the village of Bethlehem.

The event reenacts, recreates and remembers the first Christmas, a celebration that was launched with the birth of a baby more than 2,000 years ago.

Hamre said in his December 4 newsletter that the church is giving out hundreds of Advent calendars, along with Christmas Eve invitations to 100,000 homes near the three campuses (Langley, Maple Ridge, Sooke), adding:

May it provoke positive conversations with neighbours. Each of us has been placed in a strategic place (within a family, work setting or geography). God wants to shine through you this season. I’m praying you are filled with His love, generosity and boldness. The coming of Jesus was the most important game changer in the history of the world. I’m praying you have opportunity to share this good news. 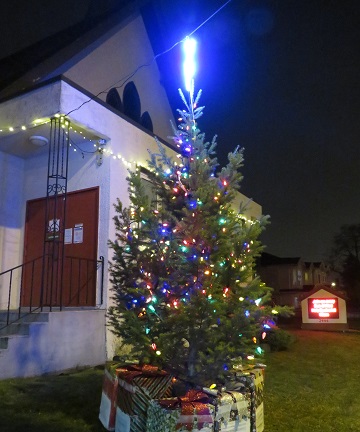 St. Thomas Anglican Church has presents for its surrounding community.

Churches all over Metro Vancouver, large and small, are carrying on with efforts to reach the community, despite COVID-19 restrictions. For example:

We plan to have a bigger Christmas tree than usual and there will be more lights on the tree and on our church building this year.

There will be wrapped symbolic “presents” under the tree. Each “present” will have the name of one of our community partners on it to symbolize the work that we are doing together.

Our Lights of Hope project intends to collect non-perishable food items or warm clothing to help people in our neighborhood. The items will be delivered through South Vancouver Neighbourhood House.

With the pandemic competing with the Grinch to snuff out Christmas cheer this year, the Archdiocese of Vancouver wants to rewrite the ending of the Christmas 2020 story as one of hope amidst a challenging time for families.

To brighten up dark evenings, the archdiocese is launching a Blue Light Campaign, inviting everyone to use blue lights when decorating their churches and homes as a sign of hope and solidarity with families who have lost loved ones and are experiencing a “blue Christmas” this year.

Though this is not fhe first year the church has put the nativity scene out in front of the church, pastor David Bornman says it is particularly valuable when people are restricted in their movements.

He said they made comments like these last year:

This Christmas Eve we’re doing something a little different – we’re so excited to present an online Christmas Eve Special! Although we’ll miss seeing you in person, it’s time to gather your family and invite your friends and neighbours to tune in, because it’s going to be a fun-filled experience you won’t want to miss. 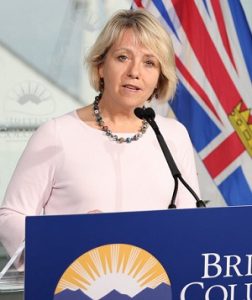 Dr. Bonnie Henry announced December 7 that the tight restriction imposed on public gathering during November will carry on right through the Christmas season until at least January 8.

She said the holidays will have to be celebrated in “different and smaller ways” and that the “vast majority” of places of worship “are doing everything they can to protect their congregants.”

Health Minister Adrian Dix said Christmas and other celebrations “will not be possible in the same way, but that does not mean we won’t be able to celebrate; we just have to create new and special memories and even perhaps build some new traditions.”

Dr. Henry said drive-through and drive-up events are still allowed, as long as people remain in their cars and hosts limit the number of vehicles to 50.

Disappointed, but carrying on

“It is very, very sad that Christmas Mass this year will be ‘virtual,’” he told The B.C. Catholic, adding that an outdoor Mass with 50 cars in the parking lot is also a possibility.

“The situation is sufficiently serious that we must do what we can so as to not strain our hospitals at this time.”

He had previously shared his hopes that gatherings of up to 50 people at Mass would be allowed again by Christmas. “In a way, Christmas is going to be like the first Christmas. It will be, in a sense, more humble, poorer,” he said in an interview Nov. 21.

As I have pointed out in the past, the Canadian Pacific District of the Christian and Missionary Alliance keeps up with government guidelines very efficiently; go here and here. Or go directly to the BC government’s province-wide restrictions page.

The way of Jesus 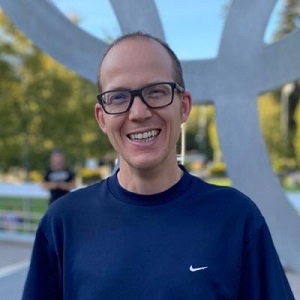 Brad Sumner focuses on “the flourishing of all members of our community.”

I also want to reiterate that we here at Jericho Ridge are committed to the ongoing health and flourishing of all members of our community.

Not just those who attend our church, but those who live proximate to us, those who disagree with the Christian message, as well as the other brothers and sisters who attend other churches and who may take a different tack or hold a diverse opinion on this matter.

The way of Jesus is the way of love and peace. The unity of the Church in our region doesn’t derive from uniformity of thought and beliefs. Our unity comes from keeping Jesus at the centre. This frees us to stay together in our differences, rather than adding to the pandemic of polarization.

We choose this path and will not vilify or comment on the actions of others who make choices different from those which our leadership has prayerfully discerned as being right for us and for the public good of our neighbours.

It appears that resistance to provincial restrictions has become less pronounced over the past week, probably because of the perception – widely shared by Christians as well as others – that the pandemic situation remains very serious. But there are signs of hope as well. Restrictions could be lifted as early as January 8, and the prospect of immunization offers a sense that the end of restrictions may be in sight.

Nonetheless, another Change.org petition posted December 3 by Fr. James Hughes of St. Patrick’s Catholic Church in Vancouver asks the government “to restore the max. of 50 people in church at one time to receive the sacraments in person.”

A December 9 update on the St. Patrick’s site states the church’s intention to abide by provincial guidelines though:

By order of the Provincial Health Officer, all In-person religious gatherings and worship services are further suspended until January 8, 2021 at midnight.

As confirmed by the Archbishop, this means, that sadly, there will be no Masses with a congregation at St. Patrick’s at this time. We will continue to live-stream the 11 am Mass on Sundays.

This petition joins at least two others posted earlier, here and here. Douglas Todd interviewed pastor Gwen Dreger, initiator of one of the petitions, for the Vancouver Sun December 4.

Members of two churches in Chilliwack and one in Langley which have received widespread media coverage met in person again last Sunday, and there are a few smaller groups which have continued to meet, but I’m not aware significant numbers that plan to join them. Time will tell.

Not persecuted, but overlooked

Dr. Bonnie Henry and Adrian Dix have been very positive in their comments about faith leaders and congregations since the beginning of the pandemic – and most religious leaders still seem to respect them, despite the restrictions.

However, there is work to do. Writing for Convivium December 4 (When believers become invisible), Jonathan Van Maren argued, “COVID-19 has revealed an uncomfortable reality . . . closure of churches isn’t State persecution but widespread ignorance of what goes on inside them.”

If our fellow countrymen fail to understand why religious practice is essential, then surely it is up to us to correct that. If religious illiteracy is on the rise, surely it falls to the religious to address this dearth of knowledge. In the face of growing restrictions, we are telling our governments and our fellow citizens that faith is essential. In many cases, the reply is: What on earth are you talking about?

Brian Bird, assistant professor at the Peter A. Allard School of Law at UBC, also raised concerns which will take time to address, in a Vancouver Sun comment. Here is a small portion:

While Charter rights and freedoms may be limited if there is justification to do so, more is required than a generic statement that there is transmission of COVID-19 in religious circles.

How much transmission is occurring in these circles? How does it compare to activities that remain permissible? On what grounds does the province believe that it can severely restrict this Charter freedom across the board?

I posted an article about Bird and his insights last week: ‘Restrictions on religious gatherings a reminder of ‘Forgotten Freedoms.’