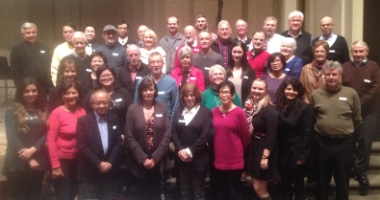 CoSA volunteers and supporters gathered for a banquet at Cedar Park Church February 19.

Frank Sawatsky is a coordinator with CoSA (Circles of Support and Accountability), which offers support for high risk sex offenders who have served time in prison. Last Friday night at Cedar Park Church (his church) in Delta, he and his CoSA partners opened those circles a little wider than usual in order to host potential volunteers and a few guests for a banquet and an evening of stories.

As volunteers and ‘core members’ (sex offenders) spoke, those in the audience were able to get a sense of the tangible expressions of grace that operate daily in CoSA.

Here is a statement by a core member which makes plain the need for CoSA, followed by comments from Sawatsky (a retired teacher/counsellor in the public school system and sessional instructor at UBC) about his involvement and the CoSA movement, interspersed with more comments by core members and volunteers. 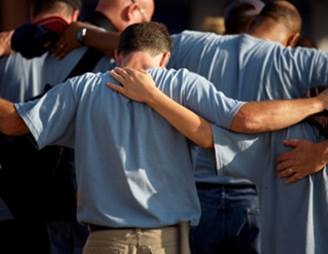 The goal of CoSA is to promote successful integration of released sex offenders into communities by providing support, advocacy and a way to be meaningfully accountable in exchange for living safely.

My job for the past six years has been to organize circles for high risk sex offenders who have just come out of jail (CoSA has worked with over 90 offenders since the program began 11 years ago). There are 14 circles in the Metro Vancouver / Fraser Valley area at the current time.

Each circle has one core member and four to five female and male volunteers. They meet weekly, helping their core member with self-management skills and checking on risk factors. Often our core members want spiritual guidance in this difficult path of rehabilitation.

Volunteers are trained to use restorative principles such as collaboration, dialogue, reparation, rehabilitation, participation, respect, reciprocity, responsibility, empathy, consensus-building, healing, empowerment, transformation and hope. We have seen the power of the circle change the lives of high risk criminals in a positive direction and make our community safer as well.

In creating community where there is loving support and tough accountability, sex offenders can change and manage their lives so there are no more victims. 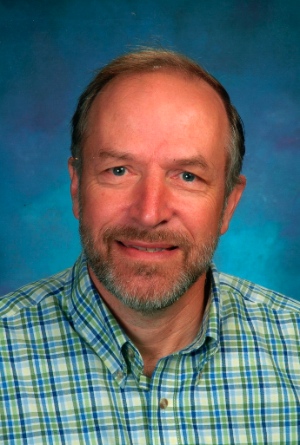 Frank Sawatsky is a coordinator with CoSA in the Vancouver area.

Why do we do this work? First and foremost we sense a calling from God. The call of Jesus to “bring good news to the poor, proclaim release to the captives, recovery of sight to the blind and let the oppressed go free” motivates me to work with marginalized men who have done much harm but are now asking for help in their struggle to go forward in their own path of healing.

I am also motivated by my passion for restorative justice and my belief that both victims and offenders can experience restoration and healing. The volunteers and myself have seen setbacks, but we have also experienced many triumphs. The success we have achieved is a blessing from God.

Our loving God reminds: “Truly I tell you, whatever you did for one of the least of these brothers and sisters of mine, you did for me.” (Matthew 25:40)

CoSA has given me the support that I have been missing in the past. That is a safe place where you are not judged, condemned for past actions, but where can one again learn to trust and take risks to be honest and open.

At CoSA I am treated with dignity, kindness, patience and care, something that has often been missing throughout most of my life. Here I am able to be myself and feel I will not be laughed at. I know that I can bring my fears, anxiety, pain – but also my joys, success and hopes and dreams and all of it is accepted.

At CoSA you know that you can turn to them in the tougher moments and will receive encouragement, advice, support and even practical assistance to meet the challenges of the moment. At other times we all share in the moments of success.

CoSA is a place to find life, where you can believe in yourself once again. There I find I am accepted into community as an equal. For me, it is a place of hope and redemption. – core member

I think our lives – my life and the people who are part of the circles of support as volunteers – have been enriched immensely . . . – volunteer

CoSA was started in 1994 by a Mennonite pastor in Ontario who recruited members of his church community to form a support group for a released sex offender. They helped him with practical needs such as housing, food, clothing, and kept him accountable. He lived in the community for 14 years before he died and had no more victims. CoSA now operates in 14 centres across Canada.

Here in Metro Vancouver / Fraser Valley, CoSA is sponsored by the Mennonite Central Committee BC and by the Archdiocese of Vancouver through Catholic Charities Justice Services. I work as a contract employee of MCC/BC and my partner Maureen Donegan works for CCJS.

Maureen began this ministry 11 years ago; I joined her six years ago. Until last year the work was fully funded by the federal government through the Chaplaincy division of the Correction Services of Canada. In 2015, all government funding stopped, and MCC and CCJS have been funding this ministry since that time.

Having this social justice work sponsored by both Mennonites and Catholics is very special. Volunteers really see the positives of this ecumenical ministry; we learn from and encourage one another.

A major study of CoSA by the federal government in 2015 reported that “in a society that demands accountability and harsh consequences for crime, CoSA’s restorative response to the ‘worst of the worst’ is exceptional.”

I see them – core members – growing, changing, finding their real selves, their dignity and their humanity.” – community stakeholder

I was surprised at how much at ease I felt when I was with men who were clearly labelled as “dangerous.” I have never been afraid or felt endangered. – volunteer

← Aging Matters: Recovering the value of being an elder
‘Father figure to missional movement’ issues challenge with two new books →