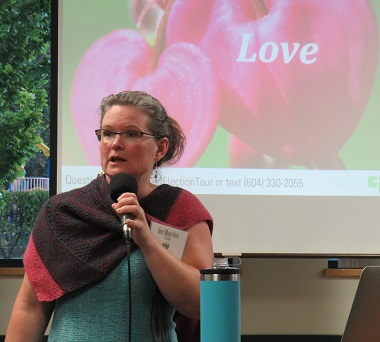 We now have just 38 days before the election on October 21, and CPJ is one of several Christian groups looking to help us make up our minds on how to vote.

Pastor Tom Bomhof welcomed Metzger and Munn-Venn to Fleetwood Christian Reformed Church in Surrey, noting that in cooperation with Northwood United Church they have hosted candidate meetings during federal and provincial elections for the past 10 years.

Bomhof said, “I’ve come to appreciate CPJ’s voice; we are glad to have them here to tell us more about how to be involved in public life.” 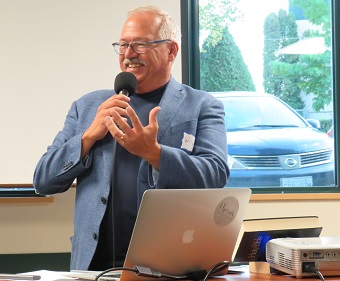 Willard Metzger is the new head of Citizens for Public Justice.

He said CPJ works hard to provide resources to undergird the work of public justice, in partnership with the faith community: “It is the responsibility of ordinary folk to ensure that public officials help to create a society where all can flourish.” He would like to see the Christian community as “a consistent and deliberate voice for social justice.”

She said that love is central to everything CPJ does; public justice is “the political dimension of loving one’s neighbour, caring for creation and achieving the common good.”

Stressing that by easily verifiable measures, our world is in a climate emergency, she said, “What we’re looking for, very basically, is policy alignment” with commitments Canada has already made. She offered three “key policy pieces”: 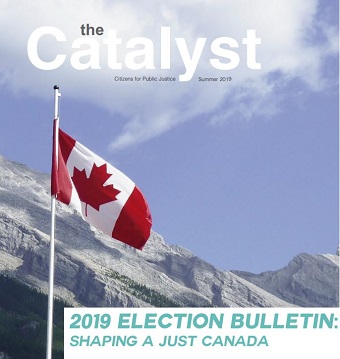 Munn-Venn said the just transition strategy accounts for hardships that the proposed policies would cause for workers in Alberta and elsewhere: “We need to move people from industries which are killing the planet, but the cost of moving away from oil and gas should be shared.”

The Election Bulletin fleshes out all these proposals. Regarding just transition, for example, it says:

Central to Canada’s way forward is a just transition towards a decarbonized economy. In a just transition, the weight of change that benefits everyone is not borne disproportionately by one group of people. It includes significant investments in low carbon energy development and energy efficiency, as well as funding for skills development and retraining for workers.

As such, it reduces emissions, creates good jobs and supports communities. A just transition incorporates a robust Employment Insurance program to assist those who find themselves temporarily out of work. It gives protection to the most vulnerable and increases social justice for all. . . . 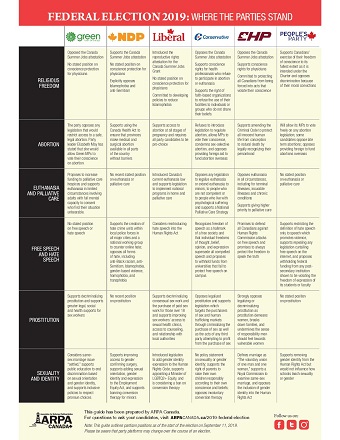 Like CPJ, ARPA Canada has its roots largely in the Reformed community (though CPJ’s base has broadened considerably over the years, and ARPA welcomes anyone who feels they might benefit from its work).

But where CPJ focuses on issues which will appeal to primarily to liberal/leftist voters, ARPA is more conservative. Reading both sets of materials will serve any fair-minded voter well.

ARPA Canada has created some election materials which feature six “issues of focus” and suggest questions to ask candidates. They focus on religious freedom; abortion; euthanasia and palliative care; free speech / hate speech; prostitution; and sexuality and identity. ARPA urges supporters to commit to volunteering for a candidate for 10 hours.

ARPA Canada’s Fall Tour will make three stops in the Fraser Valley September 23 – 27, dealing with the federal election and other issues:

As we prepare for another federal election, we see that our political and cultural leaders increasingly want to identify as “progressive.” God’s good design for humanity and creation is now seen as regressive and a political liability. But who decides what is progress? And what role do Christians have in such a climate?

ARPA Canada’s Fall Tour 2019 will be a hope-filled presentation built on the assurance that all of life is marching towards ultimate progress under the kingship of Jesus Christ.

Langley Free Reformed Church will host the September 23 event; meetings will also be held in Abbotsford and Chilliwack on the 25th and 26th. 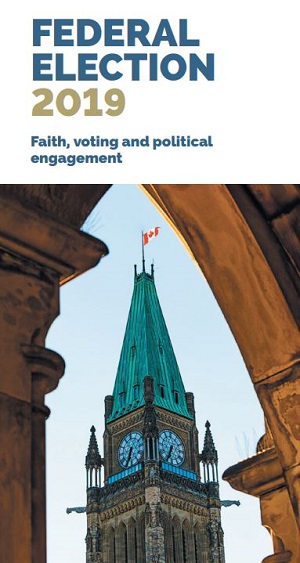 The Evangelical Fellowship of Canada (EFC) has done a good job of presenting the basic facts and issues to consider, without too much embellishment. Key to their approach is prayer:

With a federal election scheduled for October, the EFC encourages Christians to invite God to work in the hearts and minds of all Canadians as we consider the future of our country. As in each election, there are important issues at stake.

As we are commanded in Scripture to pray for all those in authority, so that we may live lives of godliness and holiness (1 Timothy 2:2), we can ask God’s blessing on our elected officials, and all those who will be elected. We can pray that Canada will be a nation that “exalts righteousness” (Proverbs 14:34).

Elections are times for candidates to discover what is important to their constituents. Pray that candidates’ eyes will be open to the principles that are vital to a healthy and productive society.  Pray that candidates and their families will experience protection, wisdom and grace during this time of great stress for them.

Pray that voters will focus on the issues of central importance for building a just nation and that every potential voter will cherish and exercise the right to vote.

Pray for our country

We ask God to grant us peace and a love of neighbour that perseveres through our differences and that God will lead us into a greater understanding of our role as citizens, and of our life together as a nation.

Blessed is the nation whose God is the LORD,
the people he chose for his inheritance.
From heaven the LORD looks down
and sees all mankind;
from his dwelling place he watches
all who live on earth –
he who forms the hearts of all,
who considers everything they do.
We wait in hope for the LORD;
he is our help and our shield.
In him our hearts rejoice,
for we trust in his holy name.
May your unfailing love rest upon us, O LORD,
even as we put our hope in you.

Along with prayer, the EFC provides a number of Federal Election 2019 Resources: 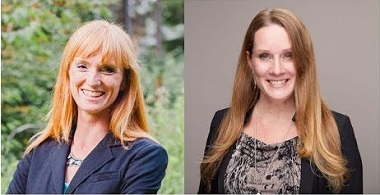 Deina Warren of the Canadian Council of Christian Charities (left) and Julia Beazley of the Evangelical Fellowship of Canada answered questions about churches and the upcoming elections in an EFC webinar.

Voting is one way Christians contribute to society and the public good. When we vote we recognize the profound influence politics has on the lives of all Canadians. Public policy impacts our lives, influences the way we interact with one another, and helps shape the care and protection offered to our neighbours.

Feel free to reproduce and distribute copies of the following resources in your group or church. To point friends to this webpage, use: www.TheEFC.ca/Election2019.

CCC: Justice and Only Justice 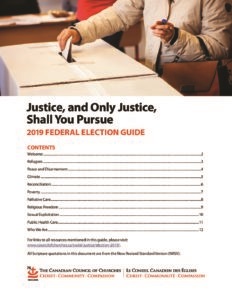 The Canadian Council of Churches released its Federal Election Guide September 10. Here is some of the introduction:

Federal elections provide an opportunity for people of faith to reconsider what their faith commitments have to do with Canadian public life. Faith can provide an enduring vision of hope, a penetrating perspective on justice for all, and deep convictions about community, care for others, a love for creation, solidarity and service.

We need the vision, perspective, and convictions of people of faith to move us beyond partisan promises and postures to genuine solidarity and service with people and the whole inhabited Earth, the oikoumene.

The Canadian Council of Churches offers this guide as a source of reflection for all who are participating in the 2019 federal election. The members of the Canadian Council of Churches have achieved consensus on the priority issues listed here. Each priority issue includes sample questions you can ask of candidates, then lists resources and links where you can learn more. We invite you to use this resource to:

• think through your own election priorities;
• call a group together to prepare for meetings with candidates;
• organize and participate in all-candidates meetings in your riding;
• go deeper into issues you care about and work on them with others;
• ask questions of your representatives and candidates for office.