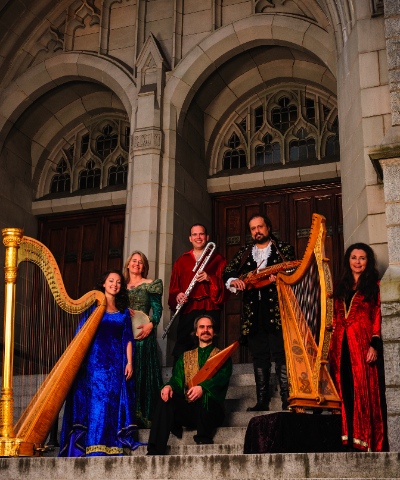 Winter Harp on the steps of St. Andrew’s-Wesley United Church.

There are a few churches around Vancouver where you could turn up just about any evening in December and find a Christmas concert underway. St. Andrew’s-Wesley, Christ Church, Ryerson and a handful of others really open their doors for the Christmas season: good for them!

You might want to make a special effort to get down to St. Andrew’s-Wesley on the 21st, for one of Winter Harp’s annual shows. Their unique Christmas/Celtic concerts have been a hit for 20 years now, ever since they made a courageous jump from playing in the New Westminster Library (where director Lori Pappajohn worked) to – where else? – St. Andrew’s-Wesley. They filled the place and haven’t looked back since.

Over the years, Lori and Winter Harp have retained a strongly Christian flavour. You’ll hear lots of carols, few if any holly-jolly-santa-songs. In a recent Georgia Straight interview, Lori said, ” “I go through every Christmas carol book I find, and spend hours and hours in the middle of summer listening to one Christmas CD after another. There are so many beautiful carols that have been all but lost – you never hear them. When I discover one, it’s like uncovering a buried treasure.”

But she points out that it’s not all about the words and music. “Visually, Winter Harp is a Christmas show like you’ll never see anywhere else,” says Pappajohn, “with beautiful costumes, and two backdrops for our theatre shows. One makes it seem like you’re inside a medieval cathedral – it looks so 3-D that afterwards people come on-stage to prove to themselves that it’s flat. The other one is like you’re looking through the arches of an old castle into the snow on a moonlit night.”

If you can’t make it to Vancouver on the 21st, and you still want to see Winter Harp, you’ll have to drive out for one of the two shows at the Act in Maple Ridge (A couple of others on the North Shore this week are sold out).

Vigil With the Silenced

On Thursday (the 19th) a group will be gathering for their last weekly ‘Advent Season Vigil With the Silenced,’ at the corner of 1st Avenue and Commercial Drive.

I’m not sure how many will be there, but the organizers say it’s the witness rather than any specific accomplishment that is important.

“The annual blitz of encouragement and splash to donate goods for the homeless or contribute gifts to ‘needy’ children may well mask the dark reality of political and economic policies that really perpetuate poverty and homelessness.

“Thus, Advent is a prophetic time – and unmasking time – to mark light coming into the world. We vigil . . . to bear witness to the cries for justice – a setting right of that which has caused hurt, exclusion and anguish.” 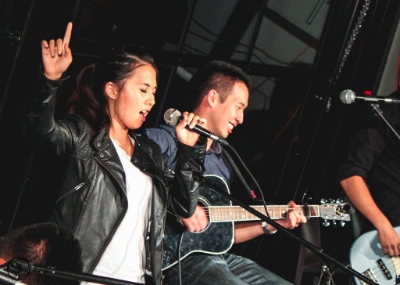 Members of HUM will help to lead ‘Make a Joyful Noise.’

Of course, there are always crises that demand prompt relief. Anyone wanting to help the people of  the Philippines recover from the devastation of Typhoon Haiyan can gather this Friday night (the 20th) at Cityview Baptist Church near King Edward and Main Street to Make a Joyful Noise.

Among the musical teams leading the way will be HUM (Healing Using Music), which “provides free live music performances to schools and care facilities as a way to share our passion for music, to support our community and to bring happiness into people’s lives. In addition, we organize benefit concerts throughout the year to connect people together and raise awareness for local charitable causes.”

All funds raised will go to the Red Cross.