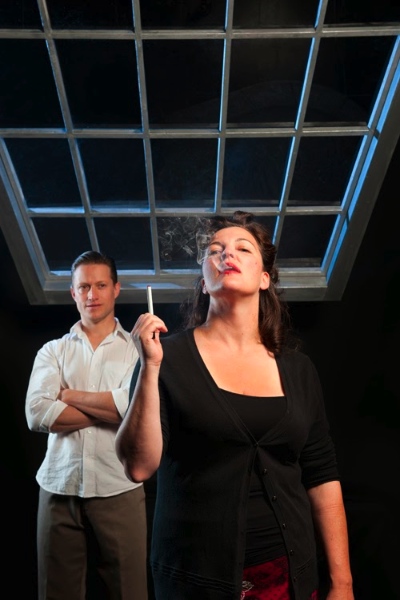 Our interim pastor recently used the analogy of dance for our relationship with God, and released a flood of stories from the congregation during the response time following the sermon. People expressed the trust, freedom, security and beauty in God they had found through dance, and their testimonies were funny, touching and dramatic.

In Lucia Frangione’s Espresso, playing now at Pacific Theatre, the climaxes are the dance scenes, as the characters respond, in the midst of their deepest pain, to the lover of their souls.

I’m pretty sure everyone in the theatre opening night fell in love with Frangione on two accounts: first, as playwright, and second, as the three major characters she portrays: Rosa, Nonna and Cinzella.

Frangione’s use of the English language is satisfying and unsettling at the same time. Not too many words, not too few. She uses phrases like “black grace” and “strange mercy” that melt the heart. Her robust rendition of her characters is bittersweet.

There are only two actors. Robert Salvatore, as Amante, is a wooing God, then an entire Italian extended family and, in the next moment, a sweet young grief counsellor. And more; all delightfully believable.

An extended Italian family gathers at the hospital when a particularly generous and beloved 59 year old man, Vito, is critically injured in a car accident. The daughter, Rosa, has long ago broken a six-year engagement to a Canadian-Italian the family all loved, and her father adored. His second wife, Cinzella – anathema to the family, and particularly to Vito’s mother (Nonna) – is a strong-minded, lusty-hearted woman, fiercely devoted to her philandering Vito. Nonna, Vito’s mother, whose answer to every pain is food and espresso, experiences grace but doesn’t extend it.

Two angled windows down which rain pours roof the stage. The floor looks like real mosaic tile, and clever use of diaphanous curtains set a variety of moods and atmospheres. The lighting in a scene where Rosa wrestles with the lover of her soul turns the dowdy black dress she has donned a brilliant red. Anger? Passion? The blood of Jesus covering her?

The ‘golden thread’ that weaves through this play is Amante, who continues his attempts to arrest the attention of these three strong, passionate women. They all object to his intrusions and we recognize the arguments as those we have also made. Thankfully, at the most uncomfortable moments, humour saves the scene from exaggerated pathos.

Espresso is a complex play about sexuality and sensuality and loyalty and disloyalty and bitterness, but mostly about love. I left feeling envious that I’m not Italian.

PS: Great news for Pacific Theatre, just in, as written up in The Georgia Straight:

“In terms of sheer numbers, there were some surprises amid the nominations for the 32nd annual Jessie Richardson Theatre Awards when they were announced today at the Vancouver TheatreSports League Improv Centre on Granville Island.

“With 14 nominations in the large-theatre category, Pacific Theatre scored almost as many nods as the much bigger Bard on the Beach, which had 15, and more than the Arts Club Theatre, which had 13. The 128-seat, Christian-focused, South Granville-area venue received the nominations for its productions of The Seafarer and The Foreigner, both of which are up for outstanding production of the year.”
Share this story