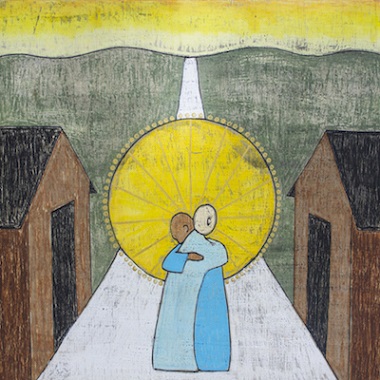 Reconciliation is one of seven practices urged on the church by David Fitch.

If there is one thing most people can agree on these days, it’s that our society is deeply fractured and getting more burdened and broken by the day.

A growing chorus of sociologists, philosophers and economists is saying that these divisions and the harms they cause can only be healed through a decisive re-focusing on the local and the neighbourly.

So I had high expectations as I arrived for Forge Canada’s weekend workshop, Into the Neighbourhood: Renewing Our Imagination for Neighbourhoods and Churches in Canada, held two weeks ago at the Surrey campus of Southside Community Church.

I didn’t leave disappointed. Here’s a small grab bag of take-aways, a couple from each of the three speakers. 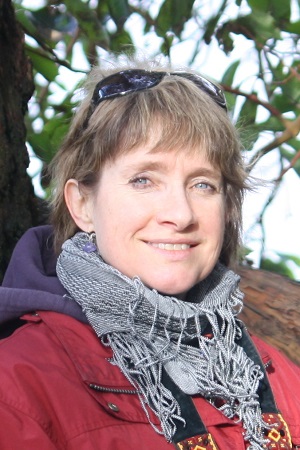 Karen Wilk is, among many other things, a mission strategist with the Christian Reformed Church of North America, part of Forge’s national team and the Laurier Heights Neighbourhood Connector for the City of Edmonton’s Abundant Community Initiative (listen here to an interview with Karen and ACI founder Howard Lawrence, also a pastor).

Karen kicked off the workshop by having us do a lectio divina (a slow, repeated reading that is more meditative prayer than textual interpretation) of Luke 10:1-12, “The Sending of the 72.” Read it three times. After the first time, note where your attention rested. After the second, note the words, phrases or ideas that grasped you. After the third, how might the Holy Spirit be nudging you. Now with all of that in mind, compare and contrast how your church goes about its mission.

Karen’s sessions revolved around the theme of biblical hospitality: from the 10 annual feasts (most a week long) commanded in the Old Testament, to the way “the Son of Man came eating and drinking” in the gospels, it’s pretty clear that God loves a good party.

Taking a cue from the eucharist, Karen recommends you start a tradition on your block or in your building of “crappy dinners”: spur-of-the-moment potlucks where folks bring whatever’s in the fridge and wear whatever they’ve got on, including sweat pants or bathrobes. In her experience, these and a host of other simple practices create trust and mutuality to the point where neighbourhoods begin to display a measure of the fruits of the Spirit. 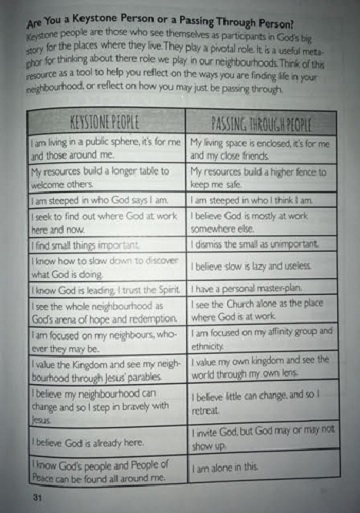 Preston Pouteaux used this illustration in his presentation.

Preston Pouteaux is part of Forge’s national team, a Lutheran pastor in Chestermere, Alberta, and a beekeeper. It’s this last hobby, or habit really, which has become formative for Preston’s understanding of his pastoral calling and his parishioners’ mission. A poetic writer, Preston for his sessions drew on his recent acclaimed book, The Bees of Rainbow Falls: Finding Faith, Imagination, and Delight in Your Neighbourhood.

One day, while peering into one of his hives, he had an epiphany of sorts: what if God looked on him, and looked after him, with the same fascinated love that he, Preston, did his bees? As that thought sank in over time, his stance toward his spanking new suburban housing division changed (his house was one of the first built). Curiosity found beauty hiding in plain sight, his imagination became harnessed to a visceral vision of the kingdom of God that has allowed him to literally shape the community around him.

That close attentiveness was reinforced when he discovered that his small town, which is little more than two or three subdivisions merging into one another, is about the same size of the northwest shore of the Sea of Galilee, where Jesus carried out much of his ministry.

This compelled Preston to re-examine the scale and rhythms of his domestic life so these could become patient kingdom work in their own right. Here’s a thought-provoking graphic that illustrates the difference for Preston between “keystone people” and “passing through people.” 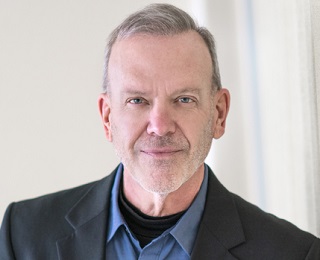 David Fitch is the best known of three speakers. As the B. R. Lindner Chair of Evangelical Theology at Northern Seminary near Chicago, and as a serial church-planter for the Christian & Missionary Alliance, David lives at the intersection of culture and the church, helping all of us find our way in a time of massive upheaval.

David spoke for most of the second day, drawing from two of his recent books, Faithful Presence: Seven Disciplines That Shape the Church for Mission and Seven Practices for the Church on Mission. His website outlines these practices.

I can’t adequately summarize here how he walked us through philosophical trends that have driven unprecedented societal change over the past 40 years. Though I’m wildly simplifying, suffice it to say that, where once an encompassing, civilizing Culture resolved conflicts, now multiple cultures (and subcultures) shape our personal identity and vie for power. We are in an era of tumult and antagonisms, yet we’re called to be reconcilers and people of peace.

Reconciliation doesn’t merely resolve conflict, it births something new from what were formerly two or more things opposed. How the church enters conflict is everything right now!

David urges we should avoid becoming defensive or accommodative, because both end up further alienating those who disagree or don’t really care. Instead, he urges a humble posture of presence in which we listen in order to connect and genuinely understand, where we ask questions and offer help in discernment, where we help identify what God is already doing and only then proclaim the gospel as the key for putting the pieces together beautifully and enduringly.

1 comment for “Faithful presence in a ‘culture of antagonisms’”