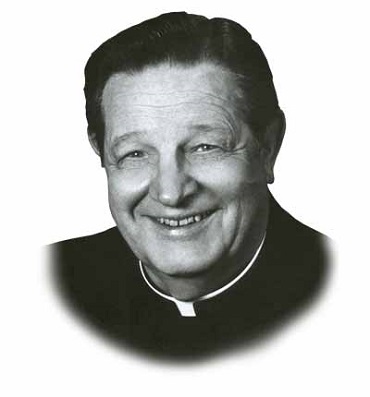 Father David Bauer is well remembered across Canada, but he also spent many years with St. Mark’s College and UBC.

St. Mark’s College is hosting the Fr. David Bauer Memorial Golf Classic today (June 14) at UBC Golf Course. This is the college’s first golf tournament, but not the first time they have celebrated Bauer’s role.

They highlight his significance to the college, to UBC and to the Canadian hockey world:
Fr. David Bauer was assigned to St. Mark’s College at the University of British Columbia by his religious order, the Basilian Fathers, in 1961, and served as chaplain to UBC until 1988. From his role at St. Mark’s, Fr. Bauer helped shape the athletic tradition of the university, coaching its hockey team, the UBC Thunderbirds, to the Canadian university hockey finals and establishing the Canadian National Hockey team, which represented Canada at the 1964 Olympics.
Bauer has been inducted to the UBC Sports Hall of Fame, the national Hockey Hall of Fame and the BC Hockey Hall of Fame.
UBC Athletics Historian Fred Hume said:

Father Bauer coached the 1962/63 UBC Thunderbirds, the precursor to the national team, to the 1963 Canadian university hockey final. The following season, the Olympic year, Bauer coached the UBC-based team to a three-way tie for third place at the Innsbruck Olympics, a satisfying accomplishment considering the team was made up almost solely of students. 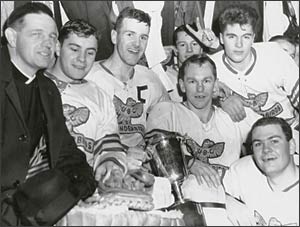 Bauer had not only successfully launched this national team concept for Canadian Olympic hockey but he brought attention and interest to the hockey program at UBC. His character had established credibility at Point Grey, which helped establish funding for the Winter Sports Centre as well as launch a new era in UBC hockey.

Moreover, according to Bauer, virtually all the players (over 80 of them) who played for Canada under his system and philosophy became successful professionals – doctors, lawyers and teachers, including Terry O’Malley, who later coached hockey at UBC. In addition, the National Team based at Father David Bauer Arena in Calgary, was an extension of his work.

Father Bauer touched everyone who knew him. According to former UBC Hockey Coordinator Rick Noonan, “I would be nowhere today, if it weren’t for Father; a lot of guys could say that.” Noonan further states, “Bauer would consult and involve everybody, everybody was important. He was also a great sounding board.”

Bauer remained at UBC through the 1970s and 1980s, acting in an advisory capacity to UBC hockey coaches and players, in addition to overseeing the Canadian Olympic teams of 1968 and 1980.

Kevin Shea wrote a more extensive overview of Bauer’s life and hockey career for the Hockey Hall of Fame. Here are some excerpts:

Father David Bauer has been described as an inspirational coach, a caring educator, a master motivator and a dreamer. He was devoted to the concept that education and hockey could mix. He viewed hockey as a means to develop a better person. He believed that building men came before building hockey players.

“We try to give our players a well-rounded education, not merely ice skills but mental and moral conditioning as well,” he told reporters in 1961. “We can’t help but be better off in the long run.“

David Bauer was the third hockey-playing brother to attend St. Michael’s College from the family home in Kitchener, Ontario. Bobby, nine years Dave’s senior, was part of that school’s first Memorial Cup championship in 1934 and went on to be inducted into the Hockey Hall of Fame after an outstanding career with the Boston Bruins. Another brother, Frank, was a bit player with the Majors in 1933-34. . . . 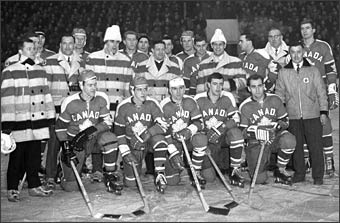 In an Olympic match against Sweden on January 30 [1964], a Swedish player broke his stick while cross-checking a Canadian player, and while tossing the broken shaft at the bench, caught Father Bauer in the forehead. Loyal Canadian team members were enraged, but as they were about to leave the bench to confront the Swede, Father Bauer issued a terse command that they remain on the bench, and tensions subsided. The next evening, Bauer invited the Swedish player to watch the Soviet-Czechoslovakia game with him. After the tournament was over, the Canadian coach was presented with a special gold medal for exemplary leadership. . . .

The accolades to an outstanding individual conclude with Jim Gregory. “Father Bauer put me on the hockey path and I am truly indebted to him. My dream was to be involved with Junior hockey and I never imagined that I would get to work in the NHL, much less be an Honoured Member of the Hockey Hall of Fame.“

To Father David Bauer, it all came down to one sentence: “If you can improve the boy as a person, you will improve him as a hockey player.“