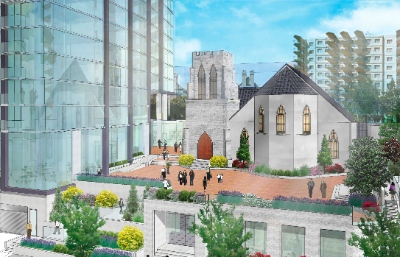 Holy Trinity Cathedral in New Westminster has plans for a 28-storey tower, along with renovation of the aging heritage church building.

Many churches occupy old buildings on valuable property in the urban cores of big cities across North America. Some of them are renewing their facilities, and their relevance – often with the help of financially-savvy faith-based partners. This week we are doing stories about churches in the city centres of New Westminster and Surrey (below) and downtown Vancouver (see accompanying story).

Holy Trinity Cathedral is one of New Westminster’s hidden gems, tucked into the hillside just a few metres above busy Columbia Street, which is undergoing major redevelopment from Westminster Quay to the Pattullo Bridge.

The cathedral has been serving what was British Columbia’s first capital for almost as long as the city has graced the banks of the Fraser River. First established in 1859, it was reconstructed after the Great New Westminster Fire of 1898.

To the west of the cathedral is a 1950s-era church hall which, if all goes according to plan, will give way within a few years to a 28-storey condominium tower that will afford the clergy and congregation new opportunities to interact with the community.

Revenue from the project will enable renovation of the aging church, under a Heritage Revitalization Agreement with the city; the agreement will allow the cathedral to be preserved in its key elements.

At the base of the tower will be community use space, underground parking and a spacious plaza. Access to the church building, currently very constricted, will be wide-open and welcoming. 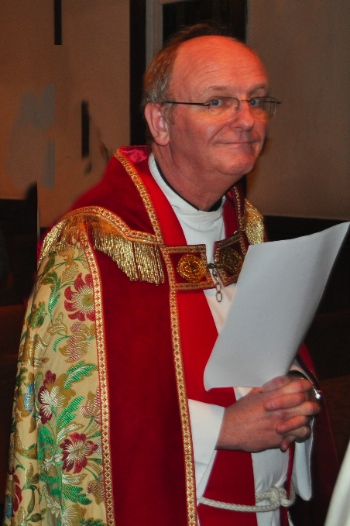 John Bailey is piloting the redevelopment of Holy Trinity Cathedral.

John Bailey, chair of the cathedral’s redevelopment committee – and until recently its rector – says the next step in the process comes in a few weeks, when the city hears the application for the development permit.

The process has been enabled, he notes, by a $700,000 loan from the Anglican Diocese of New Westminster. Renovations to the cathedral will include slate roofing, wiring, plumbing, leaded windows and the pipe organ – as well as earthquake upgrading.

Bailey says the proposed 28-storey tower is slightly higher than other developments on and around Columbia Street, but is in line with a number of nearby development proposals. The development process took a major step forward in 2011, he adds, when Terra Housing Consultants began working with the parish to steer the complex process from vision through construction and occupancy.

Notes Bailey: “As communities change, so must the church. Failure to engage the transforming neighbourhoods where we worship leads away from the gospel call to hope and joy.”

Faith-based institutions play a significant role in the development of a holistic community and Holy Trinity Cathedral is well aligned with current City of New Westminster and senior government policies and strategies regarding the impact of heritage preservation. Other critical functions provided by HTC include: 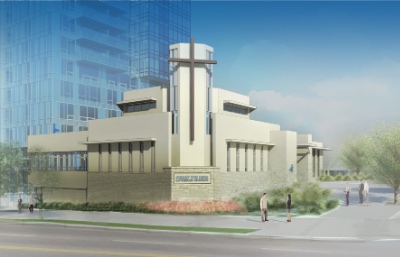 An artist’s rendering of the planned new Christ the King Lutheran Church in Surrey.

Just across the Pattullo Bridge and up the hill in Surrey is Christ the King Lutheran Church. The congregation – which began serving the old Whalley working class community in 1957 – has had to adapt to a new high-density urban core surrounding the little brick church.

Christ the King sold its site to Bosa Properties, for the first (36-storey) tower in the development firm’s plan for University District. That plan is a multi-tower project sitting next to the massive new Surrey City Hall and a short walk from a new 52-storey Marriott hotel-condo complex and Simon Fraser University’s Surrey campus.

For the church, Bosa is building a new multi-purpose 300-seat sanctuary and several meeting rooms in one of the pods at the base of its first new tower. The excavation work is almost complete and the construction crane will be moved into place any week now.