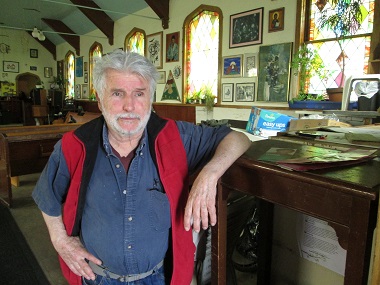 Barry Morris at the Longhouse; he wrote Hopeful Realism in Urban Ministry based on many years of experience in East Vancouver.

Pastor Tim Dickau of Grandview Calvary Baptist Church wrote this Foreword for his long-time friend and colleague Barry Morris. Hopeful Realism in Urban Ministry was published by Wipf and Stock in 2016.

Urban ministry, especially when it is going ‘well,’ can often be exhilarating and exciting. Sticking with urban ministry through congregational, neighbourhood and cultural transition, when the church is struggling for survival, is often painstaking and tedious.

With thankful exceptions, most books on urban ministry seem to be written by those for whom things are going ‘well,’ for folks who seem to be a cut above other practitioners in their entrepreneurial and charismatic leadership. Most of those books leave the rest of us in urban ministry feeling less of ourselves and our churches. 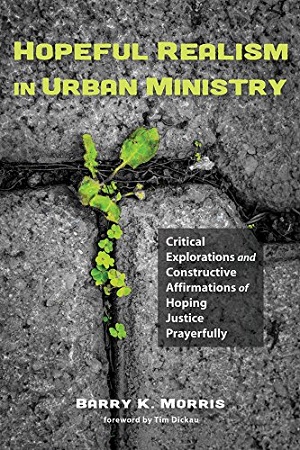 Barry and I began working in our neighbouring parishes at about the same time. I have watched, observed, admired, confided in, complained to and collaborated with Barry over the years.

What I appreciate most about Barry is that he continues to work with what is in front of him. He starts where his church and neighbours are at, rather than where they are not. In that sense, he has modeled for all these years the realism of which he writes.

Yet, he does so with hope – a hard-wrung hope that keeps working for the personal, corporate and systemic transformation that the biblical story calls us towards. And no doubt the reason that he persists in this mission journey is that he continues to pray and contemplate the divine. Without this practice he wouldn’t be here today.

The three main writers whom he draws upon for his ministry and whose thought he elucidates in this book – Niebuhr, Moltmann and Merton – are not only his mentors, they have become companions in the work of urban ministry.

Another reason to read this book is that it gives new imagination for ways that we can partner with others in urban ministry. One of the strengths of the church Barry pastors, the Longhouse, is that it looks for common ground to build upon with others.

On this path, both Barry and the Longhouse reflect these three mentors and companions. On a personal level, I believe it is part of the reason why he can pray with local Pentecostal, Charismatic and Reformed pastors; why he can work for social change with Catholics, Baptists and trade unions; and why he can offer hope for those struggling with addiction by working alongside psychiatrists and counselors.

What he offers in this book is a vision for how justice and love, the two-sided shape of Christ’s mission, can be integrated. Given that the groups he partners with have often separated them, this is good news for urban ministry today.

You don’t have to be with Barry long to see why this model of urban ministry that he espouses is compelling; it is nestled deeply within his life and ministry. Barry lives amid the stark realities of poverty, and often peppers his speech with gruff words depicting this reality, yet he does not forsake hope. Hope keeps seeping out of his speech too, like antibodies fighting disease.

As he engages the world in the divine name, he continues reflecting, ruminating, and forgiving – he continues to pray. For almost three decades now, we have walked the streets of East Vancouver, he mostly along Hastings Street, I along Commercial Drive.

I trust him. You can trust him too. And you can trust that his vision for ministry will give you courage to confront what is in front of you, hope to embrace God’s renewed future and desire to bring all of this before the One who groans with us and leads us towards new life.

My proposal is this: Read this book, because if you do, I believe that you will wake up the next day ready to go back to work in the place and parish God has called you with a realistic, prayerful hope. . . . 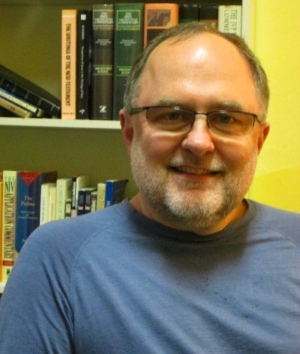 Tim Dickau has been the senior pastor at Grandview Calvary Baptist Church in Vancouver for more than two decades. Under his leadership, the church has focused on becoming an intentional community and on developing creative responses as a church to the needs of the neighbourhood. Several community ministries have grown up within Grandview, including Kinbrace, Just Work, REED (Resist Exploitation Embrace Dignity), Co:Here and Out of the Cold. Dickau wrote Plunging into the Kingdom Way in 2011.

This Foreword is posted by permission from Barry Morris and Tim Dickau.
The Longhouse Council of Native Ministry is part of the United Church of Canada, and is located on Franklin Street, just northeast of Hastings and Nanaimo.
Share this story

← Next Gen Vision: Chapel Movement invites the rest of us to join in
A Rocha’s Barn Raiser is both metaphorical and literal →