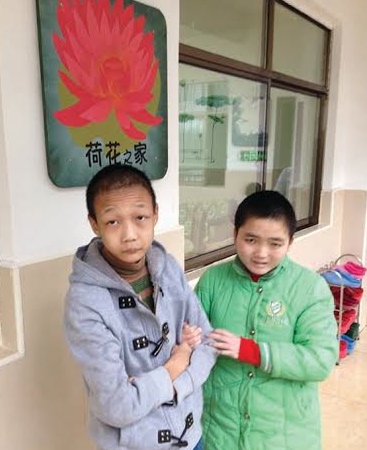 When International China Concern (ICC) began its work in 1993, disabled children in China had a bleak future. The great majority of the children left in orphanages would die there; babies often lay shoulder-to-shoulder with several others in small cribs; most babies received human contact only at feeding or changing time; and there was only one low-paid staff member for every 30 children in most facilities.

ICC founder and CEO David Gotts felt there must be a better way.

Now ICC partners with the Chinese government to: rescue children who have been abandoned; feed, house and love children; find schools for those children where appropriate; fund surgeries; prevent abandonment by working with parents; and train China’s caregivers.

ICC has projects in three cities: Changsha, Hengyang and Sanmenxia (in central China, south of Beijing, north of Hong Kong) which provide homes for hundreds of young people.

Following is a story of how two young women came to be integrated into one of the new Hengyang children’s care centre homes.

Laptop open, Yang Yong Sheng plunks down beside a young woman with a withdrawn face, trying to engage her in the video game she is playing.

Though the newcomer is initially unresponsive, soon other girls in the room join in, filling the house with laughter. Before long, Ju Ju – the wary one – cannot resist the fun and enters into the game, a shy smile growing on her face. 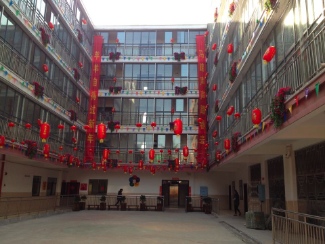 The Chinese government partnered with ICC in creating this new children’s care centre.

Welcome to the Lotus Family. The young women sharing a living space at ICC’s children’s care centre in Hengyang were among the fortunate families who received two new members this past October.

The ICC Hengyang building was funded and built by the Chinese government. “ICC’s part is probably the smaller part,” according to Gotts, “managing and funding the fit-out.” Some donors have paid to equip and decorate one unit, while others have taken on whole floors.

Ju Ju and Tao Tao were assigned “buddies” from their new family: Yang Yong Sheng, 26, was assigned to Ju Ju and Yang Hua, 18, was paired with Tao Tao. What has been amazing, staff and caregivers report, has been watching these buddies and other family members welcome the two new girls into their home, giving back to them the love and care they themselves have received.
Ju Ju and Tao Tao came into ICC’s care out of a very challenging situation. The two young women with shaved heads and long faces lived together in isolation, in joyless conditions. Because of the girls’ vulnerable state, their room was locked to prevent them wandering away. Food was passed to them through the door, and they came out of their room only for showers. 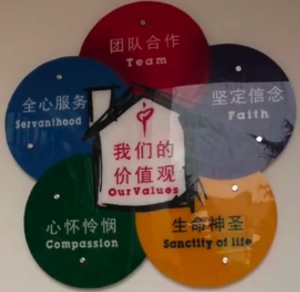 These are the values which undergird ICC’s work.

Unable to manage for themselves and left without care and support, the girls’ hygiene was poor and the room stank. Ju Ju has epilepsy; her seizures were unmanaged until ICC staff began visiting the girls last year. Both girls were clearly suffering.

When the girls’ joined Lotus Family, however, Yang Yong Sheng, Yang Hua and their “siblings” wasted no time in befriending the new family members. Yang Hua loves dancing and singing along with TV shows and encouraged Tao Tao to get up and dance with her. She quickly discovered what foods and toys Tao Tao likes, and would make sure she had them. She even taught Tao Tao how to use the washroom and dress herself.
Welcoming and encouraging the new family members has increased Yang Yong Sheng and Yang Hua’s self-esteem, says Kyla Alexander, head of China operations for ICC.
“They get to lead and be responsible,” she says. “To be the strong ones for once – not always being a receiver, but being a giver.” 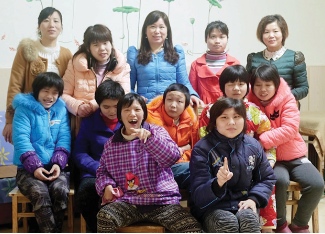 Ju Ju and Tao Tao (second and third from the left in the centre row) have blossomed in their new surroundings.

Gradually, Tao Tao and Ju Ju have begun to respond. Both girls were underweight, and Tao Tao had a habit of grabbing any food in sight. However, she has now filled out to a healthier weight and learned to eat appropriately at the table, says Xing Yu Xue, one of the caregivers for the Lotus Family.

“The whole family really loves the two girls,” Xing says. As she speaks, you can see from her wide smile how proud she is of the progress these two young women have made.
In fact, Ju Ju – who hardly spoke initially – has recently started to communicate. In mid-March, she surprised everyone by becoming protective of one of the caregivers. The “auntie” (as the caregivers are known) had put her head down to take a nap. One of the girls started pestering the auntie and waking her. Ju Ju suddenly spoke up, telling her fellow family member to leave the caregiver alone.
“It’s a huge blessing to see all these girls flourishing and becoming givers of life,” says Kyla. “Ten years ago, Yang Hua and Yang Yong Sheng were the ones needing love, and now they’re givers of love.”
“In a few years, it will be Ju Ju and Tao Tao loving and giving to others.”
The head office of ICC is based in Burnaby and houses both local and international staff. (There are also national offices in Australia, Hong Kong, Singapore, United Kingdom, the Netherlands and the United States.)
Ben Hoogendoorn took on the role of executive director of ICC Canada in April. Before that, he was president and CEO of FH Canada, the Canadian arm of the global aid and development agency, Food for the Hungry.
Share this story