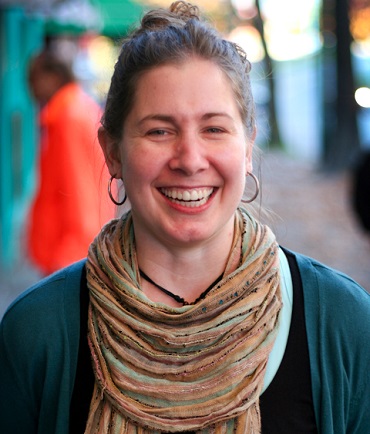 Jacqueline Dewar is co-director of Jacob’s Well, which has a new lease on life in the Downtown Eastside, despite being evicted.

Just over a month ago, the Jacob’s Well community was not sure whether it would be able to carry on, having been evicted from its long-time home at 239 Main Street, just north of Hastings Street. The team decided to close its doors for good if they could not raise $50,000 by June 15.

The good news is that the money came in on time – and they are now up to $90,000. So, Jacob’s Well will carry on, but co-director Jacqueline Dewar describes the major challenge facing the team and its community.

We talk a lot about the housing market in Vancouver – and for good reason. Many of us pay an obscene portion of our income to share meagre accommodations. Some of us are small business owners paying commercial rents that make the viability of our business ventures seriously questionable, while our favourite neighbourhood coffee shops and funky vegetarian eateries are priced out of business due to endless rent increases. This question of viability is keenly felt by those of us in the not-for-profit world, and we end up questioning the financial sustainability of operating in Vancouver.

Jacob’s Well has been forced out of its home of 16 years.

As co-director of Jacob’s Well Ministry, a faith-based community in Vancouver’s Downtown Eastside (DTES), I have come face-to-face with the realities of gentrification. The building we have called home for the past 16 years has been sold, and our community will be homeless on September 1st.

We are yet another statistic in the wave of gentrification that is displacing our city’s low-income residents and the organizations they depend on. As we look around our changing neighbourhood, we see new condos, upscale restaurants and newly renovated storefronts that taunt us with their “for lease” signs with price tags far out of reach.

Jacob’s Well is a community where folks from all walks of life come together to learn from one another and grow together in friendship. It is a safe space in a neighbourhood known for chaos and despair – a place where everyone is welcome, where we learn to see God’s image in others who are different from ourselves.

It is human nature to surround ourselves with those who are like us, with those to whom we can best relate and understand, but at Jacob’s Well we seek to create a space where barriers of difference can be overcome. We are a ragtag group of unlikely friends who are drawn together out of a common love of Jesus.

Safe spaces like Jacob’s Well are becoming more difficult to find in the DTES, and the atmosphere on the street has become more hostile as gentrification continues to push a vulnerable demographic into an increasingly smaller area.

Vancouverites hold many different opinions about the neighbourhood I call home, but whether you see the DTES as a haven for the unwanted or a cesspool of ill health and criminal activity – gentrification is not a solution.

While some see these changes as “neighbourhood revitalization,” I see more businesses that will not welcome my friends. I see new residents moving in and new business owners catering to their needs, while my friends who have called the DTES home for decades are increasingly excluded.

I see City of Vancouver owned storefronts sitting vacant, with no rent subsidies for registered charities like Jacob’s Well. I see low-income buildings sold and repurposed with no accountability for the loss of shelter-rate housing.

As followers of Christ, we recognize that everything we have comes from God, and so we must acknowledge that some of us hold privilege and power that we did not earn. We live in a society that operates on the “beggars can’t be choosers” mentality, and this mentality allows gentrification to push forward with no accommodation for Vancouver’s most disenfranchised residents.

Cities change, neighbourhoods change – I am not advocating for stagnation. I am crying out against the most powerful benefiting from the displacement of the most vulnerable. I see no easy pathways toward health and wellness for my friends living in poverty with untreated mental illness and addiction; these are complex issues with deep roots.

What I do know is that each one of my friends deserves a home in a community that accepts, supports and empowers them – not a place to squat in a city that excludes and shames them.

God instructs us to use whatever gifts we have received to serve others, as faithful stewards of His grace in its various forms (1 Peter 4:10). Let us share the vast resources that Vancouver holds and work together to create a city where all people can thrive. Let us hold our city accountable to rebalancing power through zoning laws and rent subsidies. Let us be good stewards. Let us demand justice.

Jacqueline Dewar is co-director of Jacob’s Well Ministry and co-leader of Servants Vancouver, a like-minded community based in the same area. She graduated from Regent College in 2015 with an MA in Theological Studies with a concentration in World Christianity.

1 comment for “Jacob’s Well: Creating community in the face of gentrification”