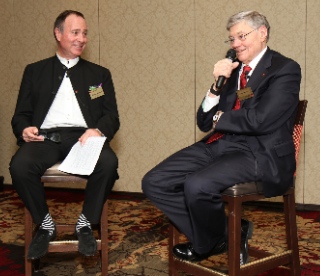 Murray Neilson (left) conducted a good-natured but informative interview/chat with Tom Monaghan, founder of Domino’s Pizza, and of Legatus. Photo by Patrick Novecosky.

Tom Monaghan is best known as the founder of Domino’s Pizza and former owner of the Detroit Tigers franchise. But for the past three decades he has been more concerned with fostering Christian character in corporate executives and in underwriting Catholic higher education.

Monaghan was the honoured guest at the Legatus of Vancouver chartering event March 3 at the Terminal City Club. He founded the movement in 1987 as an international organization of Catholic CEOs and presidents who would commit themselves to living as ‘ambassadors for Christ in the marketplace.’ There are now more than 4,000 Legatus members in 70 chapters around the world.

Though there have been meetings in this area for several years, the gathering marked the official launch of Legatus in the Vancouver area. Archbishop Michael Miller celebrated mass, assisted by Fr. Stanley Galvon, rector of Holy Rosary Cathedral. They will be, respectively, chaplain and assistant chaplain of Legatus of Vancouver. Mass was followed by induction of charter members, a meal and an interview with Monaghan. The evening was hosted by the new president of the organization, Patty Neilson.

Miller reminded the gathering that Pope Francis urges us to “place the human person and the common good first,” and encouraged them to cooperate with others having a similar ethical commitment, even though the work environment can be unfeeling and hostile at times.

Membership chair Murray Neilson interviewed (chatted with) Monaghan after dinner. Monaghan said the main point of Legatus is to encourage influential people to “nourish their faith.” Underlining the particular focus of the group, he pointed out that while lawyers might be more articulate and academics more intelligent, CEOs are more influential.

“Everyone looks up to CEOs,” he said, “not necessarily for the right reason, but they do because they’re successful.” Therefore, he added, it is good to have them formed as role models.

Monaghan told something of his rags-to-riches story. Where did he get his faith from? He spent several of his formative childhood years living in an orphanage with Polish nuns. What was unique about his franchise model? He insisted on a personal connection with franchisees, which in turn contributed to the company’s spectacular growth. 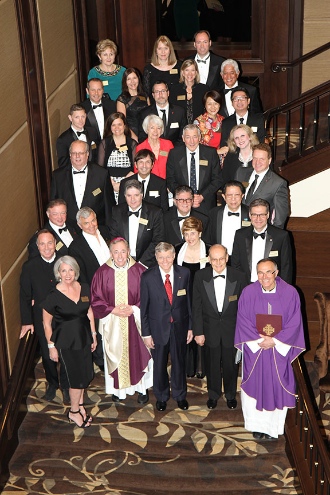 Charter members of Legatus of Vancouver at the Terminal City Club. Photo by Patrick Novecosky.

How about owning the Detroit Tigers and immediately winning the World Series? Rewarding, of course, but “I took my eye off the ball” during that period, buying yachts and planes and generally living the high life. He said he began to put things in perspective again after reading C.S. Lewis’s Mere Christianity. “I took what I call a millionaire’s pledge of poverty,” he said, and gave up most of those luxuries.

Advice? “Go out and get more Legatus members.” And he underlined the importance of confession – which was available at the gathering – “because things are getting tough out there.”

(For a full account of Monaghan’s life, look up Pizza Tiger, his autobiography; it was presented to Legatus members at the meeting. His other main love – and quite a story in itself – is Ave Maria, Florida, a planned college town he initiated and continues to support.)

Legatus joins a number of other ministries aimed at strengthening people in the business world (though most of them are not aimed only at CEOs and presidents):

Business By the Book

On the first Wednesday of every month Business By The Book – sponsored by Coastal Church and various donors – hosts a lunch at the Law Courts Inn Restaurant. The purpose is that

people from the business community come to be inspired and empowered by amazing leaders who fearlessly share their triumphs and tribulations and how their faith in God has positively impacted their personal and business lives.

The next speaker will be Joey Horvath (April 6). Past speakers have included John Fluevog, John Neate, Wayne Wachell, Yonah Martin and Peter Legge.

Tom Cooper and company have been chaplains to the city for many years. Following is a portion of the mission statement of City in Focus:

Beyond the economic, political and social fabric there is another strand in the city – the spiritual. . . .  We develop relationships with business leaders and connect them with ministries serving the community of Vancouver.

City in Focus regularly hosts breakfasts at the Vancouver Club, along with spiritual retreats and the Annual BC Leadership Prayer Breakfast. The 50th Prayer Breakfast is coming up April 22.

LeaderImpact “offers collective learning and mentorship for marketplace leaders through weekly peer groups, regular leadership forums and global exchanges.” It will host this year’s Leadercast simulcast Architects of Tomorrow May 6 at the Sandman Signature Hotel in Richmond.

The vision of the Entrepreneurial Leaders Organization is “to become the world’s leading organization to equip, connect and celebrate Christian marketplace and entrepreneurial leaders.” Their annual Vancouver ELO Conference will be held November 30.

The Company of Disciples, led by Jonathan Chan, is “a community of business and working professionals in Vancouver who desire to build, bridge and cultivate our minds so that we can proactively engage the Christian faith with the practical affairs that we encounter every day.”

Full Gospel Businessmen has several chapters in the area, particularly in the suburbs. They mobilize Christian businessmen “willing to commit themselves to the fulfillment of the Great Commission.”

The Canadian Christian Business Federation is mainly based in Ontario, but does have three chapters in the Fraser Valley. Its purpose is “to advocate Christ’s presence in the Canadian business community in partnership with Christian business leaders and their businesses.”

Every year Regent College hosts its signature Pastors and Leaders Conference. While it is by no means uniquely related to business people, the focus this year – Equipping People for Vocations in the Workplace (May 4 – 6) – illustrates its traditional concern with training lay people for ministry. Regent also operates the Marketplace Institute.

Trinity Western University’s School of Business professors are practitioners as well as academics, and exert an influence on the broader community through their courses, mentorship program and public lectures.