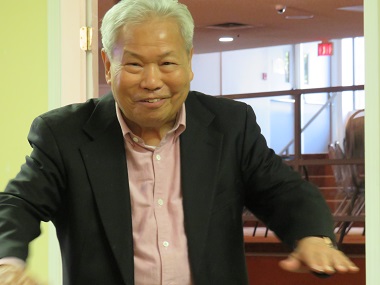 ‘Papa Khoo’ is still going strong in his mid-80s.

“If the church doesn’t disciple the nations, the nations will disciple the church.” That was a key message delivered by veteran Singaporean church leader ‘Papa Khoo’ (Khoo Oon Theam is in his mid-80s) to a group of pastors last Thursday morning.

Khoo and a small team were visiting from Singapore to lead a three-day MDN (Making Disciples of All Nations) Summit. One could describe the gathering in a number of ways – but what struck me most forcefully was that their work represents post-missionary and post-colonial developments which are reshaping the face of World Christianity.

Books such as The New Shape of World Christianity, Global Church, The New Faces of Christianity and Misreading Scripture with Western Eyes are proliferating. But most won’t read them, so we are fortunate to have numerous Christian visitors, refugees and immigrants who can offer insights about the church from all over the world. 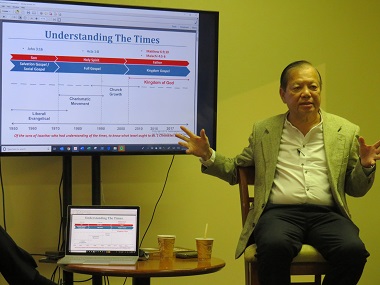 Georgie Lee and his son have written a key book on the Charismatic Movement in Singapore.

Georgie Lee, president of FGB Gatekeepers Singapore, also spoke to the pastors. He described how the church has grown from less than five percent of the population in the 1960s to almost 20 percent today.

During the 1960s, when Singapore gained independence from Britain, the church was divided between the mainline (with a focus on the social gospel) and evangelical (with a focus on evangelism).

From the 1970s to the 1990s, Lee said, the church changed and grew, especially among the English-speaking elites. Although the state was secular, it adopted a Judeo-Christian outlook which allowed the economy to grow free of corruption and the church to thrive.

Lee pointed out that much of the church growth at that time took place through the Charismatic Movement, which he has described in detail in his carefully researched book (written with his son Galven Lee), Unfolding His Story.

The book is very positive in its assessment of the Charismatic era; Georgie stated in the Preface, for example:

The Charismatic Movement was a momentous event in the history of the Christian faith in Singapore, and it changed the face of Christianity in the nation. Several lives were transformed, including those of prominent leaders of the community. On a personal level, it made an indelible mark on the life journeys of my wife, Evelyn, and me. 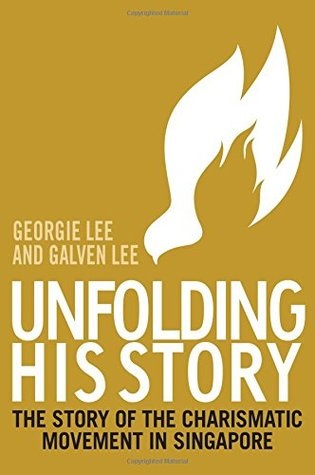 But Galven continued the Preface by indicating that the book is meant to point forward to a hoped-for Kingdom Revival (and this theme was evident throughout the Vancouver conference):

My father represents his generation. I represent mine – one that came of age in the 2000s, long after the embers of the Charismatic Movement had faded. . . . What I hope my friends and peers can understand after reading this book is this: God moved mightily in Singapore. He shaped the present state of our nation. He can and will move again. . . .

To see how God used this Revival to mould a generation of leaders in government and business, who were thoroughly committed to upholding Godly values and serving God faithfully in the marketplace and nation, helps us not to see the pro/anti-Charismatic theological debates in ideological isolation, devoid of context. . . .

This book is for everyone, be they Evangelical, Charismatic, Liberal or even non-Christian. It is not meant to pit theologies against one another. We do certainly believe that operating with the Charismatic gifts opens up a new spiritual dimension of empowerment. The point is not to champion a theology, however, but to discern and participate as Singaporeans in God’s plan for the nations.

My belief is that the coming Revival will combine Gospel-centred and Christ-saturated biblical preaching with the powerful manifestation of the Charismatic gifts. But it will transcend even the binary to encompass aspects like the Father’s heart, Kingdom endeavours in society and industry, the flourishing of the creative arts, and more.

The Revival will bring Christians together and not divide them. The key word is ‘Kingdom’ – a Kingdom Revival calling Singaporeans to repent, come under the Lordship of Christ and serve the true King in diverse ways to bless our nation. 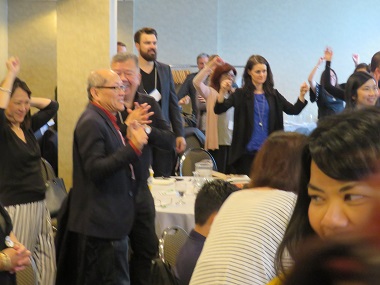 A lighter moment during the conference.

In his ground-breaking book The Next Christendom: The Coming of Global Christianity, Philip Jenkins offered a telling anecdote involving Singapore and Vancouver which illustrates how different we can be despite similar denominational backgrounds, and how important visits like the recent one by Georgie Lee and Papa Khoo are to further understanding between cultures.

Also illustrating the cultural gulf that separates Northern and Southern churches is Moses Tay, the Anglican archbishop in Southeast Asia, whose see is based in Singapore. In the early 1990s, Archbishop Tay travelled to . . . Vancouver.

When he visited that city’s Stanley Park, he encountered the totem poles that represent an important element of the local tourist trade, and he was deeply troubled. The archbishop concluded that as artifacts of an alien religion, these were idols possessed by evil spirits, and they required handling by prayer and exorcism.

This behaviour horrified the local Anglican church, which was committed to building good relationships with local native communities, and which regarded exorcism as absurd superstition.

Considering his own standards, though, it is difficult not to feel some sympathy for the archbishop. He was quite correct to see the totems as authentic religious symbols, rather than merely tourist kitsch. Considering the long span of Christian writings on exorcism and possession, he could also summon many literary witnesses to support his position, far more than the Canadian church could produce in favour of tolerant multiculturalism.

The story illustrates that what one nation’s Christians might accept as appropriate accommodation might be seen by those from another nation or culture as unacceptable. 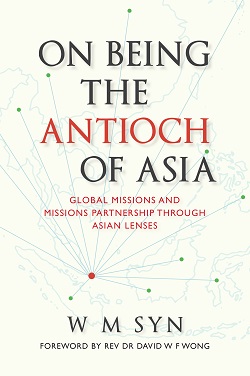 Singapore is often described as the Antioch of Asia.

I found myself wondering what it would mean for Christians to ‘occupy’ in Canada, especially when one recalls such issues as the folly of churches working too closely with the state on residential schools or the way (some) evangelicals have lost all sense of Christian perspective in their support for Donald Trump.

That unease was strengthened when I read in Unfolding His Story . . .

. . . how closely aligned the interests of these Charismatic Christians were with the Singaporean government and business establishment. The first of these striking parallels between the Charismatic Movement and state rhetoric was the active promotion of Singapore by Charismatic leaders as an Asian Christian hub and a flourishing source of spiritual blessing to other Asian nations, encapsulated in the portrayal of Singapore as the ‘Antioch of Asia.’

Of course, this is a constant issue in all cultures. One of the most popular themes around Vancouver these days is the desire to ‘move back into the neighbourhood’ and to ‘work for the good of the community.’ Where is the line that separates the creation of good will from succumbing to materialism or moral compromise?

And it is true that Singaporean churches not only support many of the social services in the small nation, but are indeed also a missionary hub.

The Lees state in Unfolding His Story:

The Singaporean Church has from the time of the nation’s founding demonstrated its unstinting service to the community, irrespective of race, creed or religion. It has made substantial contributions to the wellbeing of the people of Singapore and played a major role in nation-building.

Donald Miller and Tetsunao Yamamori have written at length about ‘Progressive Pentecostals,’ (a term that would include many Charismatic Christians) to describe churches with active social ministries. They made this comment in Global Pentecostalism: The New Face of Christian Social Engagement:

In places such as Singapore, the mantra we heard repeatedly is that Christians should serve the community ‘with no strings attached.’ In Singapore, this policy of the Christian churches fits with the government’s commitment to religious pluralism, but it also reflects a deeper theological truth that God’s love is to be expressed unconditionally.

Georgie Lee said during the pastors’ gathering last week that Billy Graham “made a prophetic statement that Singapore would be the Antioch of Asia.” He added that all the wealth in Singapore has meant there is “so much mission work coming out of Asia.”

Unfolding His Story points out that while Singapore was a recipient of missionaries and aid until after independence, “the present-day Singaporean Church is seeing some of the most extensive mission work ever undertaken by a small nation.”

Creativity marks much of that missionary enterprise; Global Pentecostalism includes this example:

A more far-reaching business [created as a means of supporting social ministry] is one that we encountered in Singapore, in which a group of highly educated Christians had formed a consulting firm which over the last decade had given nearly $400,000 to various mission projects. Their strategy has been to establish franchise businesses in places such as Cambodia, where they hire local residents and operate on a strict code of ethics that communicates their Christian values.

So, there is much to be said for Singapore Christians’ approach to culture and to missions. 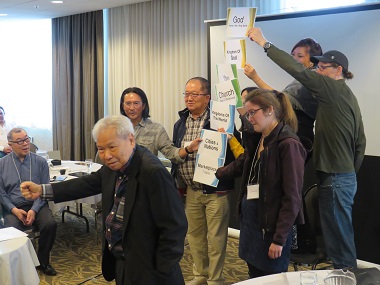 Nonetheless, Georgie Lee and Papa Khoo are challenging Singapore Christians to move into Kingdom Revival. (One very encouraging element of their story is that they have known each other since 1969; they’ve been through many ups and downs but they’re still a team.)

Papa Khoo said while in Vancouver, for example: “We must prevail and occupy the gates; if we don’t Satan will.”

The seven ‘Cultural Gates’ he refers to are:

Papa Khoo referred back to his childhood for an example of what will happen if we don’t occupy; he was forced to bow to the Japanese and sing their songs when they occupied his home town of Penang, Malaysia.

As president of FGB Gatekeepers in 2017, Georgie Lee wrote ‘Thy Kingdom Come . . . a New Season of Revival.’ After recapping the history of the church in Singapore, including its dramatic growth, the rise of megachurches and the blooming of missions throughout Asia and beyond, he said:

However, [these positive developments have] in some instances led to an unintended church-centricity.

In Acts 1:3, we are reminded that Jesus, after His resurrection, went about preaching on the Kingdom of God. In this new season, we are witnessing a fresh awakening to preach the Gospel of the Kingdom, not just the Gospel of Salvation.

The message of the Kingdom is a call to focus on God’s primary mission, which is the redemption and re-creation of the fallen world order to what He first intended when He created the world. This involves the whole of creation and all aspects of human life and activity. . . . 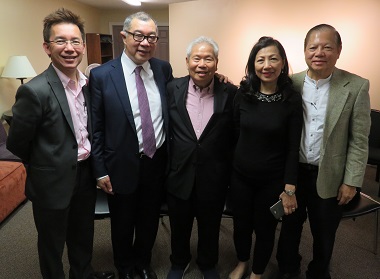 I was only able to attend a portion of the Vancouver conference, but I found the visit by the Singaporean team rousing, challenging – and slightly disconcerting. That’s okay, because Vancouver’s church – and culture – need some shaking up.

Missionaries from the West went out with the precious Gospel, admixed with much cultural baggage. We now have the privilege of hearing back from emissaries who also bring a strong Gospel message, accompanied by a new set of cultural assumptions, some good and some not so much.

This is an exciting time to be alive. If we have ears to hear, we have the opportunity to learn from brothers and sisters in the faith from all corners of the world, whether they are visiting or have taken up residence in Metro Vancouver.

Anyone really keen on learning more about the Singaporean experience and its lessons, could sign up for the MDN School August 15 – 20 in Singapore.

← Tim Day on the Church in Canada: ‘We are bigger than we realize’
Around Town: Connections, Unplanned, Hillsong, Epiphany/Surrey Food Bank … →
Tweets by ChurchforVan