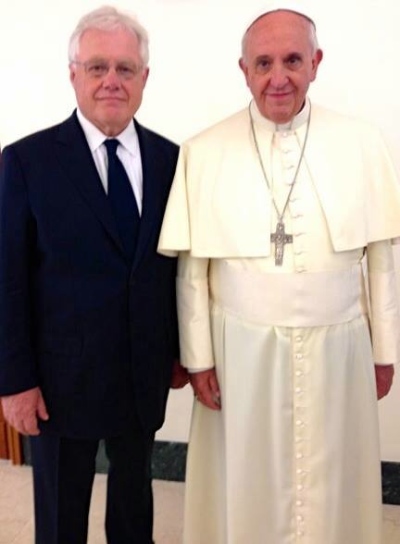 Pope Francis said to World Evangelical Alliance Global Ambassador Brian Stiller: “Let’s not spend our time on [doctrines we will never agree on]. Rather, let’s be about showing the love of Jesus.”

The inevitable question I’m asked when one knows I’ve been with the Pope is, “And what is he like?” Here are some personal observations from a recent visit.

Impressions in the first moments so frame how we see an individual. This, my second meeting with Pope Francis – an almost three-hour conversation and lunch – allowed me to more carefully form impressions.

From the outset his charm set us all at ease. As we moved from the greeting hall to the conversation room, he stood by the door to turn out the lights. I noticed that gone were the papal slippers and instead [he wore] shoes with dangling laces.

At lunch, eaten in the cafeteria, it wasn’t the waiters who served us drinks; Pope Francis served Geoff Tunnicliffe, Secretary General of the World Evangelical Alliance [who lives in the Vancouver area when he’s not at the headquarters in New York, or travelling] and me.

His presence undermines pomp or circumstance. One has to remind oneself that sitting across the lunch table, smiling through moments of joy, is one of the most influential persons in the world. His celebrity is muted by his kindly ordinariness. His influence is corralled by his loving affection for people. His power leans towards the poor, those trampled underfoot.

Two dominant gifts showed. First his pastoral instincts and gifts are so evident. I asked, “When you were presented on the balcony in St Peter’s Square after your election, did you plan to ask those in the square to pray for you and then bow in silence?” He laughed. “No,” he said, “in that moment I sensed the Spirit leading me to do that.” So I asked, “When you did so, how did you feel?” He looked at me and smiled, “I was so at peace.”

We talked about Christians marginalized, pressed under the weight of government power or the majority presence of other faiths. He listened and then told a remarkable story. In his years in and out of Rome, he became friends with the pastor of a Pentecostal church in Rome. In time, he came to learn that the church and pastor felt the power and presence of the Catholic Church . . . obstructing their desire to grow and be a witness. “So,” he said, “this July I will preach in his church on a Sunday and offer an apology from my church for the hurt it has brought to their congregation.”

Offsetting his loving and endearing pastoral gift is the prophetic: not in foretelling the future but speaking forth the word of God.

Our lunch was just days after he had announced a shocking judgment in Calabria, south Italy, condemning the Mafia for their “adoration of evil,” declaring all mobsters effectively excommunicated from the Catholic Church. Of earthquake proportion, this declaration will surely rattle communities where the Catholic Church and mobsters have for centuries lived alongside each other. They are finding that Francis is more than just a cordial, pastoral priest from South America.

In the coming days we will hear of his determination to bring the administration of the Vatican under control, replacing leadership, cleaning up the Vatican Bank and speaking to the unspeakable matter of sexual abuse. His prophetic vision sees through haze and hears past chants, cutting open hypocrisy of religious self-interest.

I know some will wonder if we lack discernment, dining as we did with the head of a church many see as heretical. As an evangelical, I’m clear in the importance of the Reformation and the role our community plays in announcing the good news. I celebrate our understanding of the scriptures as our only and final authority, the priesthood of every believer, the life-giving moment of rebirth and freedom for churches and ministries to spring up under the inspiration of the Spirit. No one is interested in rewinding the clock. Also, to construct a united church isn’t doable, and neither is it in our interest. Such plans do not lead us to fulfill Jesus’ prayer in John 17 that we be one in Christ.

My counter argument to those who might dismiss friendship with the pope is this. For evangelicals and Protestants, of all shapes and sizes, the state and condition of the Roman Catholic Church matters. Of the over 2 billion Christians, one-half are linked to the Vatican. About 600 million are Evangelicals and another 550 million members of the World Council of Churches, (which includes the Orthodox Churches).

As a world body, it is our calling to have contact with other major Christian communities and faiths. Conferencing with Rome no more compromises our doctrinal commitments than would meeting with the heads of other religions. We do that as a natural and important role of our calling. In places where evangelicals are marginalized, having this official connection allows us to raise issues and ask for responses we would never otherwise get.

In a worldwide community of faith, the work and role of each Christian community matters. Given that 50 percent of those who call themselves Christian affiliate with Rome, when its spiritual and ethical authority is diminished it affects the entire world. When Rome loses her way, when corruption characterizes her financial dealings, when sexual scandals rob her of moral influence, when she fades from view in strongly declaring the nature and salvation of Christ, secularism rules.

It’s fair to ask what kind of Catholic Church we as evangelicals want to see. At lunch I asked Pope Francis what his heart was for evangelism. He smiled, knowing what was behind my question. His comment was, “I’m not interested in converting evangelicals to Catholicism. I want people to find Jesus in their own community.  There are so many doctrines we will never agree on. Let’s not spend our time on those. Rather, let’s be about showing the love of Jesus.” (Of course evangelicals do evangelize Catholics and Catholics do the same to us. However, that discussion we will raise another day.)

We spoke about how in our diversity we might find unity and strength. Borrowing from Swiss Protestant theologian Oscar Cullman, we reflected how “reconciled diversity” allows us to stand within our own understandings of how Christ effects salvation. And then we press on to deal with global issues like religious freedom and justice and other matters, which affect our wellbeing.

We are in the middle of a major religious shakeup worldwide. The Middle East is on the edge of we know not what. Islam is on the rise. The gospel witness permeates much of the global south. So what of the future?

A vibrant Pope, spiritually vital, tough in ethical leadership and competent in overseeing his world communion is critical. What he says and does has a profound affect on us all. It matters to us that the Spirit rests upon him in wisdom and courage.

Evangelicals need not hide behind fear of engagement. Working on human suffering and matters of injustice with Christians who have a different tradition and read the biblical text differently does not violate who we are or what we believe

Working on the world stage, it is evident there is respect for our distinctive evangelical message and regard for our responsibility and calling to represent our Christian community. International cooperation among Christians is built on that respect.

Brian Stiller is Global Ambassador for the World Evangelical Alliance. This comment was posted on the WEA website July 9 and is re-posted by permission. Among his major positions before taking on this role were as president of the Evangelical Fellowship of Canada (1983 – 1997) and as president of Tyndale University College and Seminary (1995 – 2009).