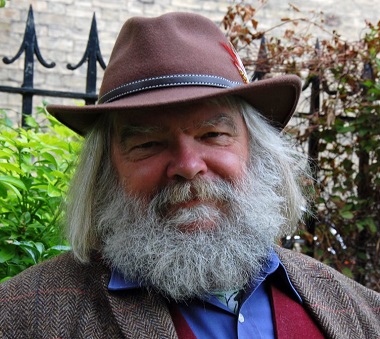 Poet-priest Malcolm Guite is chaplain and teacher at the University of Cambridge, but also teaches at Regent College. He wrote this piece for his regular Poet’s Corner column in Church Times (October 23).

As I walked George and Zara on the familiar paths round Linton through the incessant October drizzle, I reflected wryly that I was supposed to be in Vancouver.

In fact, the weather would have been almost identical (it’s not called British Columbia for nothing), but the views would have been spectacularly different; and I had been looking forward to seeing the sea and the mountains, while spending time as poet-in-residence at Regent College.

It was agreed, however, that I should teach the course that I had planned on Zoom, instead; and so I found myself reciting the oldest English Christian poem through the most modern medium, and The Dream of the Rood, which had been carved in runes on a stone cross at the end of the seventh century:

lifted aloft in the air with light all around it
of all beams the brightest. It stood as a beacon

. . . was now flickering into new life at the beginning of the 21st century on screens between Vancouver and Linton.

But, in some ways, it was strangely suited to the transition. The anonymous poet saw a vision of the cross lifted up and made visible to all:

Hosts of angels gazed upon it
In world-without-end glory. This was no felon’s gallows.
Holy souls in heaven hailed it with wonder
And mortal men on earth and all the maker wrought.

But he also saw beneath the gold the signs of the Passion, and described the two aspects, the pain and the glory, as a kind of flickering double vision in lines that almost seem to anticipate modern cinematic technique:

Yet beneath the gold I glimpsed the signs
Of some ancient agony when again as of old
Its right side sweated blood. Sorrow seized me;
I was full of fear. I saw the beacon flicker,
Now dazzling, now darkened; at times drenched and dripping,
Running red with blood, at times a royal treasure.

And, again, on our flickering screens, we all saw that together. Then came the coup de théâtre, when the cross itself speaks and gives its own account of the Passion. We came to the part where the cross is called to stand steadfast and endure the Passion with Christ, “the young hero”:

Horror seized me when the hero clasped me
But I dared not bow or bend to the earth
Nor falter nor fall; firm I needs must stand. . .
They drove dark nails through me, the dire wounds still show.

I explained to my scattered class that, here, the poet summons the whole tradition of Anglo-Saxon heroic poetry, in which, when things are at their worst, the thanes are called to find new courage and make a last-stand shield-wall. And I found myself quoting The Battle of Maldon, and remembering how I had stood on a windswept field in Essex, in another dark October, while my supervisor recited the famous lines, his voice rising above the wind:

As those lines reached across Zoom to each of us in our embattled lockdown, they seemed less like the echo of an ancient battle and more like a clarion call for the present struggle. 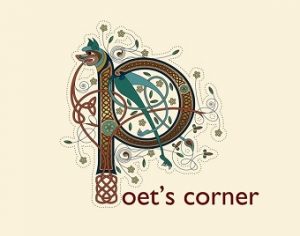 This comment was first published in Church Times (based in London, covers Anglican affairs) and is re-posted by permission of the author.

You can read and listen to audio recordings of Guite’s poetry at malcomguite.wordpress.com.