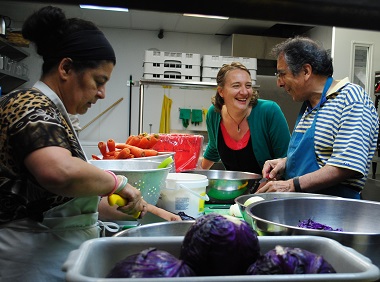 Karen Giesbrecht coordinates several community meals at churches around Vancouver. Some of the participants struggle with addictions, and she is concerned with the implications of easier access to marijuana promised by all levels of government.

On a recent Monday evening,I found myself following after a woman I will call Lori down West Broadway. The police had dropped her off at the church community dinner that I oversee. Apparently they felt she had loitered too long at her previous hang-out spot, so a meal and an opportunity for her to be among her peers for a few hours seemed like a good idea.

A combination of things triggered an anxiety attack in her – whatever had agitated her enough to attract the attention of the authorities, then being moved against her will, being undernourished and dehydrated, and arriving in a room full of boisterous strangers.

Lori dropped her backpack, mumbled something about needing a joint, and took off toward a nearby marijuana dispensary.

“Karen! Do something! She’s running away!” urged one of my volunteers, recognizing that Lori was distressed, but not sure how to respond.

We had just started serving our meal, so I checked to ensure that the volunteer waiters were in place and the rest of the guests were settling in, and then headed in the direction that Lori had gone. I was just about to catch up with her when she arrived at the dispensary. Rather than confront her, I returned to the church.

Twenty minutes later, Lori was back for dinner, now much calmer.

Was the marijuana a helpful medication, a crutch that Lori used to avoid dealing with an uncomfortable situation, or was using it an act of defiance? It certainly made her easier to handle. If Lori had remained at the church in her agitated state, she could have put all the guests on edge, and made the evening much more stressful for everyone.

I believe that if Lori had not gone for marijuana, I could have sat and talked with her until her anxiety passed. A good meal and a human connection would have helped her feel at ease again, but that would have taken time and more emotional energy than I could devote to her that evening.

The CBC is airing a series called On Drugs. In a recent episode (City, on Drugs), host Geoff Turner talked about Vancouver being a city so lovely that people will seemingly pay anything to own a piece of it, but also a place that seems to be “a magnetic pole for troubled souls,” where we have seen “a kind of narcotic migration.” This has created some conspicuous social challenges, making the city something of a “lab for drug research.”

Regulating the use and distribution of marijuana, as pending federal government legislation proposes, will be better than the current underground use in many ways. Legalizing marijuana – whether for recreational or therapeutic use – will not make public impairment socially acceptable, but will hopefully establish some needed boundaries.

As our government makes plans to legalize marijuana, there are some big questions left to be answered. We do not fully understand the sometimes irreversible side effects of both direct and second-hand inhalation. We do not yet have a simple way of testing for impairment, determining when someone is unsafe to drive, work or parent.

Equally concerning is how to determine the age of responsible use. The current understanding is that human brains are still developing until the mid-20s, so marijuana use should be restricted before then. Given the experimental curiosity often associated with young adulthood, this is precisely the time in life when regulation may be needed the most.

There are articles coming out weekly about the potential implications of legalization. In this time of uncertainty and social change, it is necessary to stay informed, and even more important that we love our neighbours, particularly those who are most vulnerable.

Here are a couple of helpful articles about what marijuana legalization means for people of faith:

So how do I love my neighbours – both those who show up at church-run programs, and my immediate neighbours?

Someone who lives in the same building as I do has a medical marijuana license, but he does not respect the request to only smoke outside. The hallways in our building reek of stale smoke. I have come to loathe the smell, but even more, I am saddened by what it represents.

This neighbour rarely engages with the rest of our community. Does he smoke inside because he feels isolated, or does he feel isolated and thus he does not care about the effects of his marijuana use on those who live nearby?

There is a growing understanding that drug use is generally an attempt by vulnerable persons to self-medicate pain or trauma – at least it is more helpful to interpret drug use through this lens. Anyone without an adequate income, secure home and strong social support can be easily overwhelmed by physical, emotional or social suffering.

So when does marijuana use become an addiction? The answer to this will be different for each user, as will be their journey toward sobriety. Evidence is showing that a supportive social network and spiritual health are factors in starting and maintaining recovery.

Our churches could be places where someone who is struggling can feel acceptance and learn practices that build their spirituality. Yet there is often a large cultural divide and uncomfortable uncertainty, from both users and non-users, around how to relate to each other.

Will we soon be thinking of marijuana as a simple tool for relaxing, at least until we better understand how to help some in pain? Whatever the laws are, and however strongly they will be enforced, we do need more of a social contract around use.

People who smoke cigarettes tend to respect the limitations around them, but it often seems like marijuana users are not as considerate. We will only create that social contract, and respect its boundaries, through knowing and caring for each other.

I have not seen Lori since she ate at the community meal that evening, but I do not imagine life has become easier for her. I had a brief conversation with my neighbour, but not enough connection to foster a sense of home for either of us. They both need embrace, not further isolation. For now, I can only try to understand their lives and seek little things I can do to dissipate the disconnection they must be experiencing.

City, on Drugs ends with a comment from a man named Patrick, who struggles with a crack habit:

Karen Giesbrecht is a registered dietitian who coordinates the Planted Community Food Network for CityGate Leadership Forum. Planted helps to cultivate collaboration toward a sustainable and equitable local food system in Metro Vancouver. Within this broader food security network, CityGate nurtures a community of practice for faith-based programs offering a deeper hospitality that moves beyond traditional charity. She takes great delight in sharing good meals with her family, friends and those in her community who are hungry.

← Around Town: Walk for Reconciliation, Family Matters, Reformation
Snapshots of faith in Surrey →

1 comment for “Marijuana can offer comfort – what do we offer?”