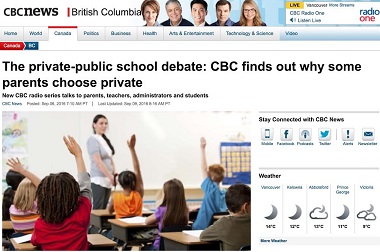 Private schools seem increasingly to be in the media’s crosshairs.

The Tyee has led the way, with articles like BC’s private school boom (2014), What’s behind BC’s tax gift to private schools? (2015) and Why are BC’s independent schools getting so much money? (2016).

Lately they’ve been joined by Vancouver Magazine: Patti Bacchus on funding B.C.’s private schools with public money (August 17) and Why are B.C.’s religious schools receiving more money than ever before? (August 24).

All last week CBC’s On the Coast, The Early Edition and B.C. Almanac presented a series called Class System: BC’s public-private school debate. The coverage was somewhat balanced. Parents of independent school kids were interviewed, for example, but the overall tone was one of challenge to the private system.

(To get a sense of where On the Coast host Stephen Quinn is coming from, read his June 24 Globe and Mail opinion piece, Vancouver public schools face closure, yet we fund private school education.)

The September 9 B.C. Almanac show, Private, public school funding, got to the heart of the matter.  Noting that “the issue that’s at the centre of the debate [is] appropriate funding for public education,” host Michelle Eliot asked:

When tax dollars that should be going to the public school system are going to private schools, doesn’t that get in the way of the public education system being appropriately funded? 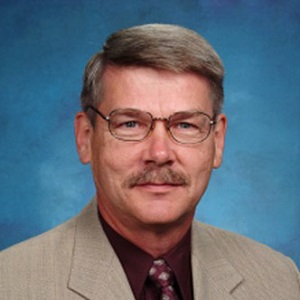 Peter Froese is executive director of the Federation of Independent School Associations.

I want to challenge your assertion here that public dollars should be going to public education. . . .

Now if you took that funding away from independent schools, the question would be could those schools continue to operate. I would suggest to you that a vast majority of them could not. They would not be able to meet the financial obligations, and what in effect would happen is those students would enter the public system and the cost would increase to the public taxpayer to the amount of $4.8 million for every thousand students that would return to the public system.

So there’s good saving that’s being provided to the taxpayer of British Columbia by independent schools, in addition to the good education that’s happening there.

Asked by Eliot whether this wasn’t an efficient use of tax dollars, public school advocate Farah Shroff (a professor at UBC’s medical school) simply said:

Well, actually, what we need is better funded public schools, that’s really the most important thing here. We do know that a recent survey showed that three-quarters of British Columbians do not support public dollars going to private schools.

Really, all I want to advocate for is more money coming back into the public system. That’s the government’s decision where they take it from. I don’t think it’s fair, necessarily, to pit the independent schools against the public schools. There’s plenty of money; let’s not fight over crumbs like that. I think that’s just pitting people against each other in a very negative way. I think we need to say, all our children in the province of British Columbia are precious, we need them to be well educated. . . .

So, it appears that (some) public school advocates are not necessarily opposed to independent schools, as long as they are convinced that those schools are also concerned about the education of all BC children.

Liberals and NDP both supportive 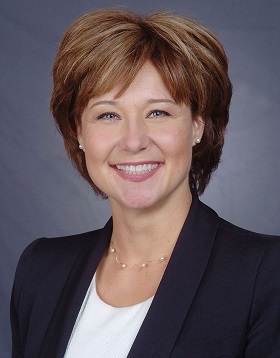 Fortunately for private schools – more properly called the independent schools – both major provincial parties seem to remain committed to them, as they have been since the 1970s.

Premier Christy Clark not only supports independent schools, she has her son attending one. The BC Liberals could pay a price at the polls if the education issue gathers even more steam between now and the provincial election next spring.

Clark is notorious for having stripped classroom size and composition clauses – when she was Education Minister in 2002 – from contracts which had been negotiated in good faith by the BC Teachers Federation. The Supreme Court of Canada has agreed to hear the case, which was won at BC Supreme Court by the union and BC Court of Appeal by the government.

Clark’s hard line on education funding is also forcing the Vancouver School Board to move ahead with plans to close a dozen schools (all but one on the East Side, no surprise). 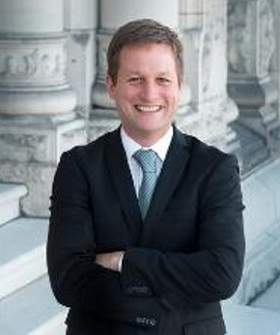 NDP MLA Rob Fleming wants more support for public education, but not at the expense of the private system.

We’re going to focus our energy on making substantial new investments in public education. . . . Yeah, we’re not going to change the balance of what we’ve had under governments of different stripes . . . I think people need to understand what private schools . . . look like.

I know an awful lot of parents who are involved in Catholic schools – the Catholic school system that’s been going on for over 100 years in BC. I have a working class Catholic school in my own constituency [Victoria-Swan Lake], and these are not elitists, these are people who just have a deep abiding faith. There are Muslim communities, there are Khalsa schools in Surrey and other places that do receive partial tax funding.

I’ve talked to public school teachers who don’t necessarily have a problem with private education. They want the public school system improved and they wonder, at a time when there’s not enough being put into the public system, how, if we were to directly transfer 80,000 kids out of the public system into the private system, where the government would come up with an extra 600 million dollars.

You know, this week we’ve heard from so many parents. They’re saying that we’re subsidizing schools that they can’t afford to send their children to, while their child’s school may be losing programs or facing closure, so how is private school funding fair to them?

I guess you get the argument from private school parents too, who say, look I’ve paid taxes for everybody else’s kids and get, in some cases, a 50 cent dollars [independent school students receive up to 50 per cent of the per-student grant allocated to public schools] in order to send my kid to a local parish school. So everybody contributes to the dollars that go into the public system and the lesser amount that goes into the private system.

I think around funding – because that’s what people are really talking about Gloria – they’re saying, how can it be in, for example a community like Osoyoos, this government is trying to rip out the only high school that that town has. People recognize that the public education funding model is broken, and that’s what needs to be fixed.

There’s not just one pot of money called private education to find the money to fix that. . . .

An issue for the church?

So, does the debate about private/independent schools really matter for the church? Yes, for at least a couple of reasons:

1. There are several Catholic schools and a couple of Protestant schools within the city of Vancouver – and many more up the Valley and around the province. They have been built with a lot of blood, sweat and tears by parents who want their children to be taught in a way consistent with their faith.

2. The second reason is closely related to the first, and was expressed well by Froese, when asked why people choose independent schools:

What we’ve been told by parents is that one of the main reasons is that it’s a choice, and it’s a choice because the values of the home are consistent with the values of the school. One of the issues for parents who might want to choose a public education – and by the way, we have a very good public education system in British Columbia, and it should be appropriately funded . . .

But the issue is that under Section [76(1)] of the School Act, public schools are restricted in terms of focusing exclusively on secular values and non-sectarian principles. For many families, they would prefer to have an environment for their kids where their kids can feel safe, where the values of the home are taught in the school.

And so you will see, in this province, where choice in education is available, 60 percent of the independent schools in the province are faith-based to some extent. and you will see a variety of faiths represented, and that appeals to a lot of families. When we ask the families, why did they choose an independent school, they cite that as one of their main reasons – the fact that their faith values are not able to be recognized in the public sector, whereas they are in the independent schools. . . .

How should we respond?

Most Metro Vancouver kids go to public schools, and there is no reason to think that will change any time soon. Many churchgoers are public school teachers or in other ways involved with the public system.

So, what kind of approach should Christian parents, and churches, be taking?:

1. Demand a strong public school system. Our education is the envy of the world and must be vigorously supported. Demand adequate money for the system, and don’t forget Christy Clark’s track record.

2. Keep in mind that the public system is required to be ‘secular and non-sectarian.’ There will be no opportunity to change that wording in the foreseeable future, but neither is it written in stone. The system could become more amenable to other worldviews – or not.

3. In the meantime, we have a dynamic independent system, supported by both main political parties – though not, I would say, by the media, nor even by most of the public, given that what it knows about the topic often comes through the media. So, it is important that churches and individual Christians stand up for the independent system now, while its legitimacy is being questioned.