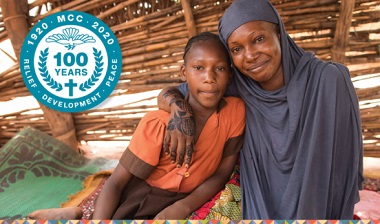 For the past 50 years the annual MCC Festival for World Relief in Abbotsford has raised funds for uprooted and vulnerable people around the world.

This year, thanks to the pandemic, the September 19 – 20 event will be a Festival To-Go.

We started by helping families affected by war and famine in southern Russia (present-day Ukraine). We now work in more than 50 countries around the world.

Catherine the Great invited European settlers to help colonize lands in south Russia in the latter part of the 18th century. Many Mennonites from Prussia took up the invitation and thrived there for over a century. By the late 1800s the tsarist regime began reducing their privileges though, and with the anti-German feeling of the First World War and the new Bolshevik regime, the traditional Mennonite way of life was increasingly under threat.

Persecution worsened during the 1930s, when Stalin’s reign of terror was at its height, including state-induced famine in Ukraine. The MCC was instrumental in supporting the Mennonite communities and in helping them to flee to the West.

An article on the MCC Canada website by Meghan Mast explains the origins of MCC:

Nearly a hundred years ago, citizens of southern Russia were buckling under the weight of revolution, heavy Bolshevik taxes and a typhoid epidemic. 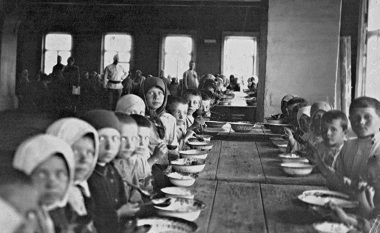 This feeding program (1922) was one of 140 such MCC-supported centres in southern Russia. MCC photo

Four Mennonite men from the area set out to ask for help.

In 1920, the “Studienkommission,” as the group was called, travelled from southern Russia, what is today known as Ukraine, to western Europe and North America.

They shared stories of the revolution, counter-revolutions and resulting struggles for the approximately 100,000 Mennonites and other residents.

As people gathered there, the first MCC relief team – made up of Orie Miller, Clayton Kratz and Arthur Slagel – travelled to Constantinople, today known as Istanbul, with a shipment of material goods. . . .

Go here for the rest of ‘Tractors for Ukraine:The Origins of MCC.’ 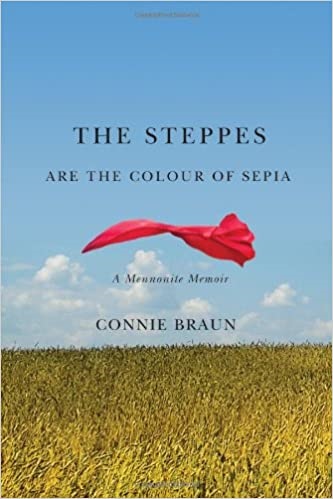 Mennonites emigrated to various nations from Russia, and the Fraser Valley became a favoured destination. Several books by authors from this area describe traumatic journeys from Russia to Canada.

Connie Braun wrote The Steppes are the Colour of Sepia: A Mennonite Memoir.

Building on recollections of her father and grandfather, and other family members, she “invites the reader to embark on a journey that traces the paths of ancestral memory over the steppes of the Russian empire to the valleys of Canada’s Fraser River.”

In the Zaporozhye area, Canadian and American Mennonite representatives set up canteens, one in the Chortitza colony. The Mennonite aid-givers were among the Mennonites who had left in the late 1880s, the Kanadier, who still had relatives living in the former Russian empire. . . .

[The MCC] would later, following World War II, assume the role of locating and assisting refugees.

Braun describes the years of famine in the 1930s and invasion by the Germans during the Second World War. Her grandparents and their family lived in Austria after the war, “where they dreamt of someday having their very own farm in Canada.” A photo taken in 1946 shows them wearing clothing donated by MCC. An MCC worker also told her grandfather how to apply for immigration. 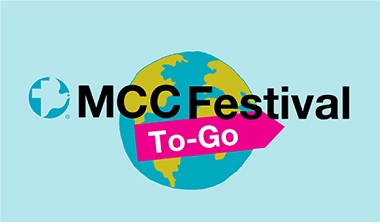 MCC was initiated in order to help fellow Mennonites, but even in the earliest days in Russia it shared food and supplies with other communities.

They now support peace and justice initiatives around the world; all funds raised through the Festival To-Go and Cyclathon this year will support displaced families in DR Congo:

For the past 50 years, MCC supporters across the Lower Mainland have gathered to generously raise funds to support uprooted and vulnerable people at the MCC Festival for World Relief.

Over 790 million people do not have enough to eat. Join us this year as we raise funds to help families in The Democratic Republic of the Congo (DR Congo). 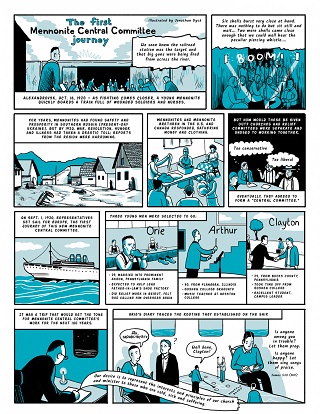 This graphic story about the first MCC Journey by Jonathan Dyck is found in ‘100 Stories for 100 Years.’

The violence and death that many Congolese have witnessed is unfathomable: millions of people have been displaced from their homes after decades of conflict.

This year the MCC Festival has a 6:1 match! For every dollar you donate – six dollars will go to help uprooted and vulnerable people in DR Congo. Find out more here!

The MCC site features 100 Stories for 100 Years. Here are topics for a few of the many fascinating pictures and stories:

There is also a timeline of its work: From the beginning: MCC and disaster response.