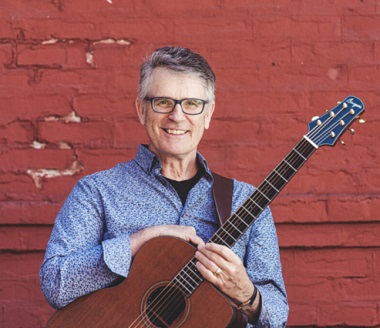 Michael Hart considers ONE a crossover album which will offer hope to the unchurched.

Michael Hart hopes his new album “will appeal to people who have no church background, who are searching for a benevolent God who cares.”

ONE is his ninth album, but he took a 10-year break since his last one. During that time he has had plenty of opportunities to interact with people in all kinds of circumstances.

In particular, he has worked as a chaplain, “which I enjoy as it’s a covert form of pastoring that puts you straight into the societal fabric.”

Just a couple of weeks ago he retired from four-and-a-half years at the Salvation Army’s Harbour Light:

I was chaplain music coordinator for individuals dealing with drug addiction in Vancouver’s Downtown East Side, in the midst of the present opioid crisis. I’ve learned a lot about music as a tool to aid in the recovery and healing of the human heart. I’ve heard some real out-of-the-box stories, reminders of the human brokenness all of us have.

Hart says, “Even in the last week, another guy I knew really well passed away of an OD.”

Hart describes ONE as “the kind of album to support your journey on pilgrimage,” and the production of the album itself was quite a journey.

I started writing a lot in 2015 and approached jazz pianist Nelson Boschman to see if he’d be willing to rehearse together to see how the new material would stand up with just acoustic guitar, vocals and piano. We rehearsed 14 tunes off-and-on for four years, trying different keys and tempos, as well as revised lyrics for the 10 chosen, with ‘One’ ending up as the title (Ephesians 4:5). 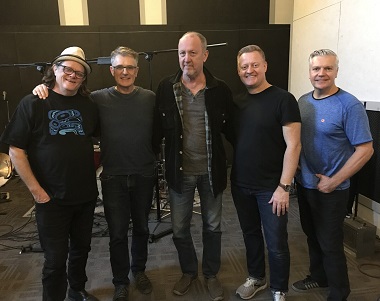 Three of his band members have been friends for many years.

He and Boschman would often meet at the Artisan Church office at 8th and Scotia (Boschman is pastor of spiritual discernment at Artisan Church).

Hart has toured with Graham Ord, who has released eight albums himself. Phil Robertson has accompanied many local musicians over the years, while Gord Lemon came to Vancouver from the east more recently.

Hart says that all the band members are Christians and “it was good to be able to pray together during the three days we had booked in Studio Downe Under in Abbotsford.”

He was aiming for something a little different from mainstream worship music in the “live off the floor” recording. While he acknowledges that “there are certainly a lot of great worship songs” out there, he says ONE “doesn’t quite fit the prevalent ambient rock / anthemic worship style,” adding that he’s “gone a little more pop/jazz.”

This is how his promotional materials describe the album:

One is jazzy and uplifting, with a percussive rhythm section driven by drummer Phil Robertson and bassist Gord Lemon. Blues-rock guitarist Graham Ord embellishes each song with tasty guitar riffs. Nelson Boschman’s piano solos are buoyant. There are also some smoking BG vocal and sweet violins interspersed, but never taking over the songs. Michael’s vocals have never sounded better, and those lyric revisions must have paid off as there isn’t anything to add to what’s being expressed.

I won’t venture into the foreign territory (for me) of music criticism, but I do find that description apt – and I was pleased to see that Geoff Howlett stole my words about my favourite song when he reviewed ONE on Never for Nothing:

On ‘He Won’t Need No Directions’ Michael leans the musical style to someone like a tuneful Neil Young, with Graham Ord shining on electric guitar.

About ‘Till the Blessings Overflow,’ he says:

The opening lyrics, especially, spoke to me: “I heard you shoulder the humble; And lift up the bowed down; Carry the hurting close to your heart; Your comfort comes around.” Michael’s vocals embrace each word, with the musicians providing excellent backing.

The lyrics are available on Hart’s site.

Hart says of his purpose:

My main focus with ONE was to write a body of work that would support the nature of Christian pilgrimage, in a non-liturgical style. We live in a complex age of increasingly negative caricature of the Christian voice, if not Christ, being rendered powerless and irrelevant and my hope is to counter in a musically artistic way.

Some have said the album is worshipful and lifts them up to The One, whereas a secular person might say they like the groove or a certain song. So I’m happy either way, but it’s probably why this is more of a ‘crossover album,’ yet there’s no vagueness about the Christian impetus of the project.

Hart is particularly happy about the cover art for the album: “That painting is really important to the whole album.”

He was still unsure what the cover would be in March, when he attended the Shekinah exhibition featuring work by Caitlin Ambery at the Dal Schindell Gallery (at Regent College).

He was impressed by her work and spoke with her father, who he had known for 40 years, at the showing.

He was particularly taken by ‘Maggie’s Flowers,’ which Ambery (and owner Helen Lennie) gave him permission to use for the cover.

Hart says it has been a very pleasant surprise to find that so many people have linked the image to his music, finding “hope in spite of sorrow; beauty in the midst of winter; an Aboriginal Mary Mother of God; the candle / light breaking through . ..”

Hart says that though the album was never meant to be linked to his work at Harbour Light . . .

ONE has some themes that resonate with God coming to the low places in life. Everyone is on. a journey of recovery in some way, but it’s independent of my ministry in the Downtown Eastside . . . except the line crosses with the organization being briefly mentioned for 25 percent album proceeds going  towards the restoration of those who’ve suffered in sex-trafficking.”

He is particularly supportive of the Salvation Army’s Deborah’s Gate, “a national, specialized program of care serving international and domestic women age 18 and up who have been trafficked into situations of sexual and/or labour exploitation, and are in need of protective and restorative housing and healing.”

Releasing an album in the midst of a pandemic is tough. Hart points out that live concerts are the ideal place to sell copies, but adds that there are still good options:

The quotations in this article come from three sources – a phone conversation, emails and a release by Michael Hart.