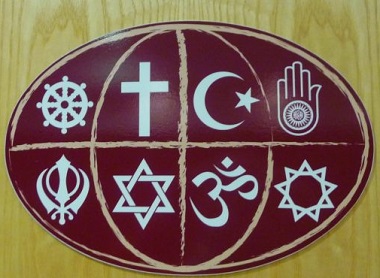 ‘Canadians consider religions more damaging than beneficial: survey.’ That’s the headline Global News came up with as they reported on a new Angus Reid Institute survey.

And that’s not the only bad news. The survey, conducted in partnership with Cardus, suggests Canadians’ religiosity is on the decline.

The survey is broader than similar ones in the past:

This data explores not only the connection and conviction of Canadians of faith among more traditionally prevalent demographics – Catholic, Mainline Protestant and Evangelical communities – but also among Canadians who identify as Jewish, Hindu, Muslim and Sikh. What do these communities of faith have in common? How are they different?

The report covers a range of issues, from which provinces have the strongest religious base to how often Canadian pray and how much room various religions feel they have to practice their faith.

One connection I found particularly interesting was the similarity in outlook, on some issues at least, between Muslims and Evangelicals.

Here is a portion related to ‘formal commitment’:

More than half of those who identify as Roman Catholics (52%) and Mainstream Protestants (56%) fall into the Spiritually Uncertain category. However, they are half as likely to be Non-Believers (10% each) as the general population sample (19%).

Those who identify as Evangelical Christians are much more likely to be on the higher end of the index – three-quarters (74%) are Religiously Committed.

Approaching half (46%) of those who identify as Muslim fall into the Religiously Committed category, while another three-in-ten (31%) land in the Privately Faithful. 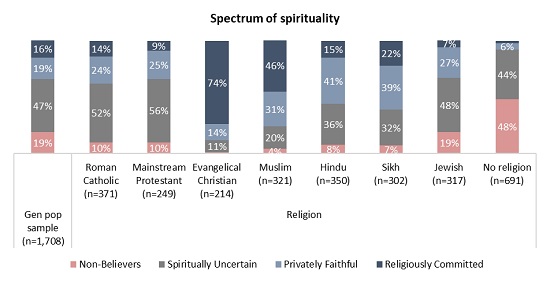 Muslims and Evangelicals appear to hold similar views on the positive value of religion in society and of their faith’s particular contribution:

Overall, Canadians are more likely to believe religious and faith communities are making more positive contributions than negative ones. Three-in-ten (31%) say the good outweigh the bad, while one-in-five (22%) say the opposite. Still, the largest group of Canadians (47%) say religion contributes good and bad to society in equal amounts. . . .

While those among major religious groups are more likely to believe religion makes positive contributions to Canadian society than negative ones, there is a significant difference in the proportion in each group who say faith communities have been beneficial. This ranges from two-thirds (67%) of those who identify as Evangelical Christian to three-in-ten (29%) of those who identify as Roman Catholic.

Respondents – regardless of their own personal religion – were each asked to assess four specific religions as to whether or not their presence in public life is benefitting or damaging to Canadian society. For three religions – Catholicism, Evangelical Christianity and Islam – Canadians are more likely to believe their presence is damaging than benefitting. For others, positive assessments outweigh negative ones.

Appraisals vary depending on the respondents’ own religion. However, only Evangelical Christianity is seen as more damaging than benefitting by every other self-identified religious group.

Hinduism, Sikhism and Judaism are broadly seen in a positive light. 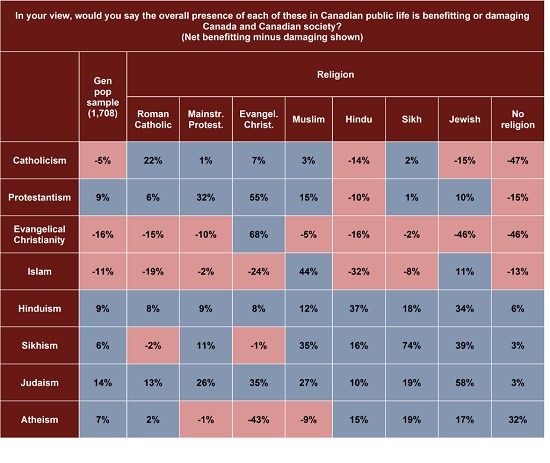 On a related theme, the vast majority of those polled, even among the non-religious, say freedom of conscience makes Canada better.

The survey offers plenty for Christians to think about. Among the issues that immediately come to mind:

On the last point – and without denying that there may be some good reasons for questioning the value of religious participation in society (the lingering effects of residential schools comes to mind) – it is worth noting the words of Cardus President and CEO Michael Van Pelt in Cardus at Twenty and Beyond (posted November 23, 2021):

Cardus produced a dozen Diakonia reports spotlighting the good and inspiring work of organizations such as Matthew House here in Ottawa, and Welcome Home in Winnipeg serving low-income families in the Point Douglas neighbourhood through their food bank, counselling and recovery groups for those struggling with addictions.

We have been studying the very real, concrete, even life-saving hospitality that such groups provide all across our land, starting in the 2000s with Toronto the Good, all the way through our major Halo Project and Halo Calculator in the 2010s and the Hidden Economy report from 2020 showing that faith-based organizations contribute $67 billion to Canada’s GDP every year – adding up to be Canada’s ninth-largest enterprise, bigger than the Bank of Montreal.

That’s $67 billion’s worth of organizations living out what it means to be ambassadors of reconciliation and healing. These organizations are showing hospitality to the poor, the vulnerable, the desperate.

During the Global News feature, Rick Hiemstra of the Evangelical Fellowship of Canada, said that American media portrayals play a significant role:

I watch Netflix just like everybody else, and really, when you see the perceptions of evangelicals, or Christians, or religious people generally – let’s just say devout religious people – they are usually presented as deviants.

And perhaps it is matters of perception that are pushing Canadians to both sides of the spiritual spectrum, leaving a growing middle that largely avoids traditional religious labels.

Whatever the reasons, Christians – Evangelicals and Catholics in particular – can pray and work toward faithful means of convincing their fellow citizens that they are having a positive impact on their surrounding communities.

Here are the topics covered in the survey:

Part One: Measuring the spirituality of Canadians
• The Spectrum of Spirituality over time
• Quebecers lean away from faith, Prairie residents more committed
• Age and gender
• Muslims, Evangelicals express most formal religious commitment
• Worship and prayer
• The certainty, or uncertainty, of a higher power

Part Two: The faith journey
• Seven-in-ten were raised in a religious tradition
• Involvement in formal observances and activities is varied by faith group
• Will immigration sustain Canada’s religious communities?

Part Three: Faith in the public square
• Contributions of faith groups
• Canadians diverge on which faiths are benefiting or harming Canadian society
• Are personal religious values and faith accepted or shunned in Canada?
• Vast majority, even among non-religious, say freedom of conscience makes Canada better
About the Spectrum of Spirituality

Go here for an overview and here for the full 20-page report.

← Around Town: Artist’s Journey, Ukraine fundraisers, Nonreligion in Cascadia
Creating Conversation: Euthanasia in the light of Good Friday and Easter →