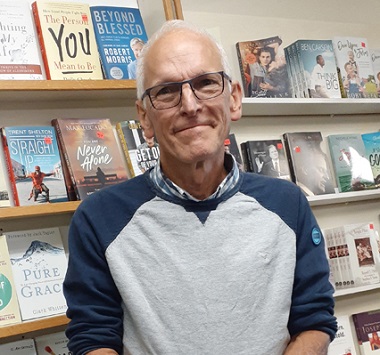 “You just know when it’s time. You feel it in your gut,” says Greg Wasmuth.

The stock of books, Bibles, music, movies, greeting cards, trinkets and artwork at Pilgrim Book and Bible is definitely dwindling as the 35 percent off signs sway from the breeze brought in by another customer looking for last chance bargains.

Greg greets each person as if they were his best friend, and it is that personable touch and gregarious smile that so many loyal customers will miss when the store closes permanently this Saturday (October 24).

Since 1974 Pilgrim has been anchored in East Vancouver, with a mission to equip Christians for life’s journey. The store has survived a fire in its original location, a flood from a huge aquarium next door in its second location and a deluge from a broken pipe in its third.

Like its owner, the store has been resilient and quick to keep on but the passage of time, changing demographics, competition and the surge of the internet has spoken louder.

“There has always been something to encourage us, however.”

Pilgrim Book and Bible got its name when Greg’s wife, Wendy, suggested the moniker after the couple had enjoyed Pilgrim’s Progress.

Greg says that he was a self-styled hippie in his first year of English Literature, studying apocalyptic books like Ezekiel, when his future wife Wendy gave him his first Bible. Through reading and study, he gave his life to Christ and the couple then absorbed numerous Christian books, changed friendships and went to church.

They zealously wanted to do something for God. Greg thought originally that he would sell books for a few years and then go into ministry. Books gave the Wasmuths life, and so the dream of giving life to others through books became a reality.

Encouragement came when people would come in and express how a book had changed their life.

During one of the early days a young man stopped by, talked with Greg and purchased a book. He later admitted that he had been on his way to commit suicide. but the talk and the book he picked up changed everything.

Some mentioned that they were impacted by a book their parent had purchased when they were young. He loved it when children would come in to read in the children’s area at the back of the store.

“We’re not preaching to people but we’re helping them understand by the books we display and the conversations we have, and this seems to make a difference for people.”

Nothing was “more important than the person who walked in the door…. Whether they were buying a greeting card, a novel, a commentary or a book of some kind.”

Praying for customers and calling them by name was standard practice. At one time Sunday School curriculum was the foundation of a good segment of business, as dozens of churches relied on Pilgrim for their quarterly orders of Gospel Light and David C. Cook – but now even Bible study materials are being ordered online.

Greg has been gracious in giving local authors a chance to display their works on consignment. He says, “it’s good to work with like-minded people in the community.” When Greg sold his last copy of Mere Christianity recently it gave him a pang because he prided himself on the classics that he sold among the rest of the stock.

He says the hardest thing about closing is the loss of relationships after 46 years because this is more than a business. He says executives come to the end of their time, clear out their desk and walk away while things continue.

“Every day people come into the store and are sad that we are closing and we’re sad that we won’t be seeing them as often. The Christian community is small enough.”

Greg isn’t sure of his future dreams but hopes to work with schools and churches in speciality resource areas without being tied to a brick and mortar location. There are still a lot of loose ends to tie up.

He’s been giving New Testaments to a gentleman who gives away free Bibles in SkyTrain stations and would like to keep that up. Christian bookstores have withered to about 50 in Canada and even the suppliers have dried up.

“We have a generation that is reading articles and shorter clips on the internet but there is still a generation which likes the comfort of a tangible book where they can curl up with a coffee or read in the park or wherever they are.”

Greg himself has been a pilgrim through the Christian resource landscape and he has doubled as a pastor to pastors during these years. He will be missed.

Greg says that the one thing you can’t replace is time. “We’ve kind of been married to the store and now the grandchildren need time. I’m hoping to continue playing hockey and staying involved in supporting the Christian community. After praying for years I’ve reached a peace that it’s time to end Pilgrim.”

Greg adds, “Come out and vote on the 24th and then come and clear out Pilgrim.”

Greg Wasmuth, bookseller extraordinaire. Friendly, warm and engaging and he always knew what he was talking about. He is well respected by his customers and by book distributors and other booksellers. His presence in the bookstore and his infectious smile will be dearly missed. I wish Greg many adventurous and fulfilling retirement years.

Greg Wasmuth was one of the first people that I met when I started with Missions Fest Vancouver in 2014. He is a true treasure and man of God. Pilgrim Book and Bible. and by extension Greg, have operated the book table at the conference since 2006.

Every year, rain or shine, Greg and a few faithful helpers packed boxes of books and merchandise and brought them to the Vancouver Convention Centre for the public’s enjoyment and edification. Greg’s smile and enthusiasm at the crack of dawn on a Friday morning always gave me a sense of peace and joy at the start of our busiest weekend.

The staff and I at Mission Central wish you all the best Greg, as this next chapter in life opens up before you. Thank you for your love and faithful service.

“Greg was one of those people who made you feel at ease in his presence. Our interactions happened mostly at Christian booksellers conferences where he would generously share his knowledge of the Christian bookselling industry with whomever asked for help.

He passionately lived out his mission “to equip Christians for life’s journey.” His easy approachable manner along with his desire to share the gospel of Jesus Christ with everyone he could was the successful combination he needed to provide years of excellent service to the Christian marketplace.

He will be remembered for the difference he made long after he retires.  All the best in your retirement Greg”

Well done Greg, on over three decades of service to Greater Vancouver, supplying churches and individuals with life-giving resources. Thank you for your partnership in this calling we share, the conferences and buying trips where we discussed, planned and encouraged each other. You deserve some rest for a job well done!. I’m sure a new adventure awaits!

The Lord bless you and keep you; the Lord make his face shine on you and be gracious to you; the Lord turn His face toward you and give you peace. (Numbers 6:24-26)

This article is re-posted by permission of the author, from The Light.

← Recovering: call to connection can foster a ‘beatitude community’
Lausanne’s call: for the whole Church to take the whole gospel to the whole world →