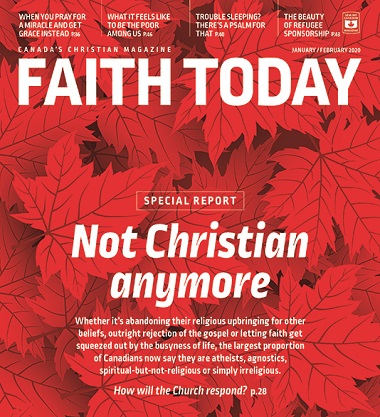 Every few years the Evangelical Fellowship of Canada (EFC) conducts major polls in order to “track evangelical alignment in Canada.”

The Church and Faith Trends survey was conducted with 5,011 Canadians over the age of 18 during August 2019 by the Maru polling company.

Among the key findings:

* The majority of Canadians now say they are atheists, agnostics, spiritual (but not religious) or have no religious affiliation.

* The percentage of ‘evangelical affiliates’ in Canadian society has been cut in half over the past 25 years.

* Just over one-tenth of Canadians attend religious (not just Christian) services weekly, down from two-thirds just after the war and one-third late last century.

Rick Hiemstra, director of research and media relations for the EFC wrote a four-page article on the poll for the January/February issue of Faith Today, which is published by the EFC.

In Not Christian anymore, he wrote:

Religious affiliation and service attendance are some of the trends we monitor. We use questions that basically ask, “Do you have a religion, and if so, do you participate?” . . . 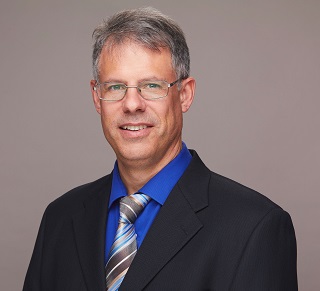 Rick Hiemstra was chief researcher, along with Sam Reimer, for the EFC’s recent survey on faith in Canada.

In our poll we asked people about their affiliation and attendance at two points in their lives – when they were 12 and now at their current age. We chose age 12 because that’s just before many parents give up trying to get their kids to church on Sunday. . . .

Here is some of what the poll discovered:

First, we found half of Canada’s population say they are either agnostic or something similar. And second, we found about half the Canadians who went to church as a 12-year-old eventually switched to those agnostic categories. . . . 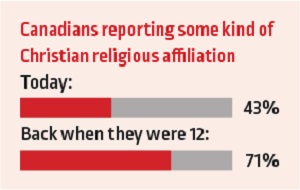 The number of ‘evangelical affiliates’ in Canada has dropped by half since 1996:

What about evangelical churches? Don’t we do a good job sharing the gospel and attracting members of that AASN group to our churches? Not really, it seems.

There are small tributaries of new members flowing in from Catholic and mainline Protestant traditions (as there are also evangelicals flowing in the other direction), but these new members do not compensate for the overall declining attendance in the churches of Canadian evangelicalism.

The 1996 God and Society in North America poll found 12 per cent of Canadians were evangelical affiliates. A 2015 poll found 9 percent. Today that seems to have dropped to 6 percent. 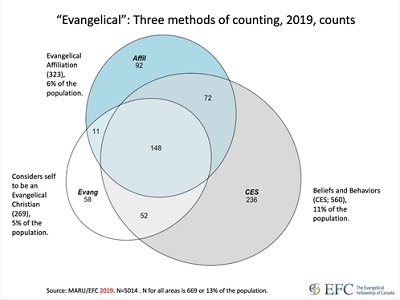 The EFC laid out what could be seen as a slightly more encouraging way to look at the numbers in their December 10 assessment, noting:

Every kind of measurement has its own limitations. Public opinion polling has its limitations, but so do individual questions or sets of questions.

To better find ‘evangelicals,’ in addition to the Christian Evangelical Scale questions we also asked questions about affiliation and whether respondents consider themselves to be evangelical Christians.

So, our three measures were:

Chart 1 (shown at right) shows the how 2019 survey respondents answered these three questions. . . . We observe the following: 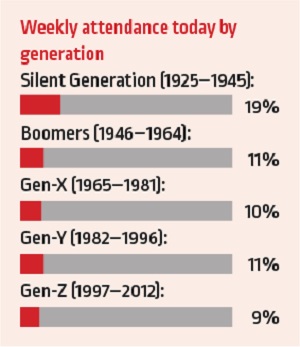 Still, the numbers make it clear that the situation is serious; Hiemstra wrote in his Faith Today article:

As for current attendance at religious services, 11 percent of Canadians now attend at least weekly (all religious traditions, not just Christians). This is down from 67 per cent just after the Second World War in 1946 and from 30 per cent in 1996.

Are poor attendance numbers all about young people not showing up for church? Yes and no. Young people aren’t showing up, but neither are older people. . . .

Our poll shows there are nearly eight times as many Canadians who never attend religious services as those who attend once, twice or three times a month.

Go here for the full Faith Today article. And there is more still if you subscribe to the magazine; for a free copy of the January/February issue, email Karen Stiller at senioreditor@faithtoday.ca. 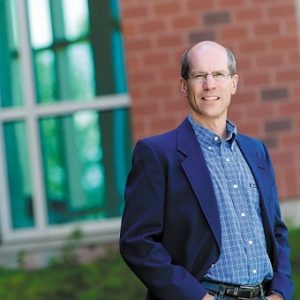 Sam Reimer worked with Rick Hiemstra on the EFC’s recent survey of faith in Canada.

For another introduction to the study, listen to researchers Rick Hiemstra and Sam Reimer of Crandall University on 32-minute The State of Religion in Canada podcast with Karen Stiller.

John Stackhouse also wrote a response for the January/February issue of Faith Today: Will Christianity disappear from Canada?

After noting that no wing of the church is immune to the decline described in the study (including the Roman Catholic Church), he concluded:

Could Christianity actually disappear from Canada? There are other lands where it has mostly vanished – consider North Africa and the Middle East under the pressure of Islamic regimes, or many former communist countries.

In Canada political forces and other religions have not been the main challenges to Christian faith – instead the challenge here since the Second World War has been a continuous experience of prosperity and security. Yes, there are troubling signs Christian faith is increasingly unwelcome, but in a global context it really isn’t all that hard to be a Christian in Canada.

For most of our Canadian neighbours the question is: Why should we bother to be Christians at all?

In a country as comfortable, busy and secure as Canada is today, maybe the interest of one-tenth of the population is all evangelicalism can aspire to holding.

Maybe the key concern to keep in mind as we build churches and relationships is this: Are we positioning ourselves so that, when life’s sharp edges eventually do cut through people’s cocoons of comfort, we are clearly standing ready to offer something else, something more?

Along the way we need to honestly take stock to make sure the reason we are merely enduring, instead of thriving, is not the result of our failure to ask enough of our neighbours, nor offer enough to them.

For if that’s true, then maybe it doesn’t matter much if such a pale, thin “Christianity” does disappear after all.

3 comments for “Poll shows half of Canadians are atheist, agnostic or without religious affiliation”