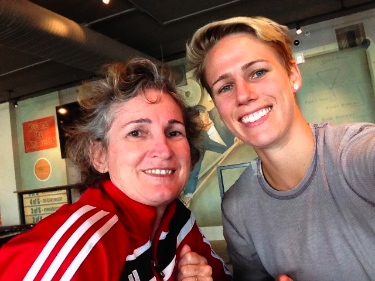 Cornelia and Sophie Schmidt have each found a unique way to share their faith.

Sophie Schmidt of King Road MB Church, Abbotsford, has been a quiet Christian presence on the Canadian Women’s National soccer team for 10 years. Her mother Cornelia has been an outspoken evangelist on short-term mission trips around the world for 15.

This year, the callings of this globe-trotting mother and daughter converged in a prayer initiative for the FIFA Women’s World Cup, June 6 – July 5, when 24 countries are competing in six Canadian cities.

In 2000, as a 40-something mom of teenagers, Cornelia began her mission experience as a chaperone for King Road’s youth group in Fiji. “That’s where I learned to share my testimony,” she says.

“After two Fiji trips, I went to Ukraine, where I couldn’t speak the language: that’s where I learned to pray!”

In total, Cornelia has been on 15 trips with MB Mission. In 2013, she saw 75 men in a Colombian prison accept Jesus. But last year, Cornelia wasn’t sure what God had for her next.

Then, Cornelia took a Perspectives missiology class. When the missionary speaker pointed to a baptism photo of 10,000 people in Africa, Cornelia responded, “I want to be part of a God movement here!” The course impressed on her Psalm 67: God’s heart for the nations.

Cornelia and her friend Ingrid Drochol of Greendale MB Church, Chilliwack, began praying together for Sophie to have opportunities to share Jesus at the World Cup because “the nations are coming to Canada.”

Cornelia purchased ads in the MB Herald, and sent prayer cards and match schedules to other evangelical churches in the six FIFA host cities, asking churches to pray for “workers for the harvest” (Luke 10:2), for the Holy Spirit to lead people to trust Jesus, and for Sophie’s team.

She included Sophie’s favourite verse: “Have I not commanded you? Be strong and courageous. Do not be afraid; do not be discouraged, for the Lord your God will be with you wherever you go” (Joshua 1:9). 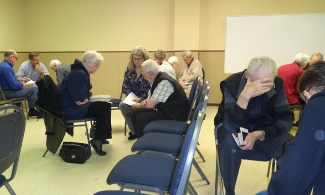 Cornelia prays for Sophie weekly with a group of seniors at Central Heights Church.

Cornelia encourages churches to lead prayer walks around their homes, workplaces and stadiums. She has done three walks around King Road, praying Psalm 86:11 (“give me an undivided heart”) for herself, her church and Sophie. Cornelia can also be found in Mill Lake Park, Abbotsford, praying and sharing Jesus with families outside the arena.

Cornelia prays for Sophie with a weekly prayer group of 80 – 90 year olds at Central Heights Church. “I was invited once to share about my mission trip to Ukraine, and I kept going,” says Cornelia. “One lady told me she always wanted to be involved in sports but wasn’t allowed. It’s so exciting for her to see a Christian woman on the national team.”

Cornelia bought six tickets for prayer partners and family to attend each FIFA match in Vancouver and intercede throughout the game.

“Sophie accepted Jesus when she was quite young,” says Cornelia, “and prayer has been the number one thing in our family.”

Sophie doesn’t speak about her faith with fans or media unless they ask, but her love for Jesus is in posted in black and white on her website and twitter profile. After her team won bronze in the 2012 Olympics, Sophie was asked to speak to many soccer teams and schools. At a luncheon attended by local dignitaries, she had the opportunity to share her inspiration: U.S. National soccer player Michelle Akers, whose faith is important to her, just as Sophie’s is to her.

“Women tell me they allow their daughter to follow Sophie online because they know she’s a believer in Jesus,” says Cornelia. Sophie even gives her phone number to young soccer players with permission to call her for advice in stressful situations. “The girls know they can trust her,” says Cornelia.

“She’s a Daniel, prepared at a young age to be a huge example to other believers,” says Cornelia. “Daniels are on the frontline, and we prayer warriors are right behind them.”

Cornelia hopes churches that hear her call to pray will join this God movement because “God is opening doors in Canada. From here, God will use committed believers in him worldwide.”

This article is re-posted by permission from the April issue of the Mennonite Brethren Herald.

A May 31 article by Marc Weber in The Province picked up on some of the same themes:

Sophie Schmidt’s mom, Cornelia, is leaving Canada during the FIFA Women’s World Cup group stage. She’s headed on a mission trip to Israel and won’t scramble to find a TV broadcast or a web stream of her daughter’s games.

“She’d prefer not to,” Schmidt, the Abbotsford-raised midfielder, said with a laugh. “She says, ‘I’d rather just pray for you while the game’s going on. It’s too stressful.’

There will be a Perspectives on the World Christian Movement summer intensive course at Willingdon Church July 24 – 31.

← Around Town: UGM’s Summer Connect, School’s Out at Playland, Bell Ringing . . .
Voices Together: Uniting to lift high the name of Jesus on Canada Day →