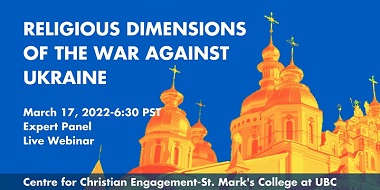 Organizers explain why Religious Dimensions of the War Against Ukraine will be valuable for anyone grappling with the complex religious dynamics at play in the conflict:

Religion is an underlying dimension to the erupting conflict in Ukraine. Though often ignored or misunderstood, it is a longstanding element in relationships between Russia and Ukraine and often a pretense for political and military actions. Join our four distinguished speakers to explore the religious dimensions of this war, including the historical and current contexts.

Drawing from a variety of Christian perspectives, including Orthodox, Ukrainian Catholic and Protestant Christianity, and their own academic research and personal experience, each panelist will each give a short presentation followed by a panel discussion and an extended Q and A with audience members.

This discussion will be of interest to all those looking to learn more about historical and religious factors contributing to the current crisis, evolving church and state relations with Ukraine and Russia, and the weaponization of Christianity in conflict.

Registration will be open right up to, and even slightly after the Zoom event begins. Viewers can also follow St. Mark’s YouTube channel. A recording of the event will be posted here when it becomes available. 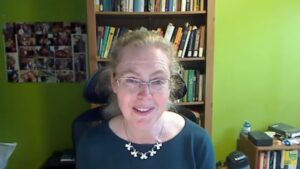 Click on the picture to hear Heather Coleman address the topic ‘Are All Ukrainians Orthodox?’

One of the four panelists is Heather Coleman, Professor of Russian History and Director of the Research Program on Religion and Culture at the Canadian Institute of Ukrainian Studies (CIUS) at the University of Alberta.

She has produced a couple of resources recently which could work as a primer, or adjunct, to the discussion.

She responded to the question Are All Ukrainians Orthodox? in a short video March 3, as part of ‘A daily response to your questions about Russia’s about Russia’s war against Ukraine,’ sponsored the the CIUS.

Here is the text:

The simple answer is no. In fact, Ukraine has quite a complex religious landscape. About two-thirds of Ukrainians identify as Orthodox, which makes Orthodox Christianity by far the biggest faith in Ukraine. But a further almost 10 percent are Catholics, and there are substantial Baptist and Pentecostal communities, as well as Jews and Muslims with deep historical roots in the country.

And the way that these various groups of believers are organized is very important for understanding the potential significance of religion in the current conflict.

Kyiv [Kiev in Russian] is a profoundly symbolic site in the Orthodox world, and especially for the Eastern Slavs – the Ukrainians, Belarusians and Russians – who all trace their Christianization to Grand Prince Vladimir of Kyiv’s decision, over a thousand years ago, in 988, to accept Christianity from the Greeks and to baptize his people.

This is a potential source of kinship, but also of tension in the modern world. For example, the Russian Orthodox Church has long asserted that Russia, Belarus and Ukraine make up its exclusive canonical territory, a sort of religious field that other churches cannot legitimately enter.

In Russia, the Russian Orthodox Church is the largest religious institution, with the most members. Historically, and again in recent years, it has asserted a special relationship with the Russian state.

But in Ukraine, the story is much more complex. In Ukraine, several churches claim the mantle of being the national church of the Ukrainian people, tracing their roots to Kyiv. There are several distinct Orthodox churches, for example. Orthodox Christianity is organized as a family of self-governing churches, and the various Ukrainian churches position themselves differently within this family

The most important are the Orthodox Church of Ukraine, which is a self-governing church in communion with the Patriarchate of Constantinople, and the Ukrainian Orthodox Church, a local church with some autonomy, but under the Moscow Patriarchate.

But very significantly, there is also a large Catholic population in Ukraine, and it too considers itself to be an inheritor of the Kyiv tradition. in fact, since the late 16th century, ethnic Ukrainians have been divided religiously between Orthodoxy, which is dominant in the central and eastern parts of the country, and the Ukrainian Greek Catholic Church, which predominates in the western region.

The Greek Catholic Church is an Eastern Rite church. That means that it worships using Orthodox-style liturgy, but it is in union with the Roman Catholic Church; it recognizes the Pope as its head.

Because Ukrainians are both divided in their religious affiliation and historically comparatively religiously active, pluralism has reigned in Ukraine and in Ukrainian state life since independence in 1991.

In fact, Ukraine has a unique organization that reflects this fact. It’s an interdenominational Ukrainian Council of Churches and Religious Organizations, which for over 25 years has brought together Orthodox, Catholic, Protestant, Jewish and Muslim organizations to promote inter-confessional dialogue and advise the state of church-state relations. This reflects the broader pluralism and high level of civic activism that characterizes Ukrainian civic life.

As the crisis has unfolded in recent days, the international relationships of the Ukrainian churches have played out in interesting ways.

The self-governing Orthodox Church of Ukraine circulated a prayer for defenders of the motherland, and called on the international community to help end the conflict.

The Pope expressed profound pain in a telephone call with President Volodymyr Zelensky, and called for a day of fasting and prayer for peace on Ash Wednesday.

President Zelensky has also spoken with Ecumenical Patriarch Bartholomew in Constantinople, who expressed solidarity and prayers for peace.

Meanwhile, to the surprise of many, the head of the Moscow-linked Ukrainian Orthodox Church, Metropolitan Onufriy, appealed to Vladimir Putin to end the fratricidal war and to respect the sovereignty of Ukraine.

As the Patriarch in Moscow continues to support the so-called military operation in the Ukraine, another Metropolitan of the Ukrainian Orthodox Church has just told his priests that they need not pray for the Patriarch. 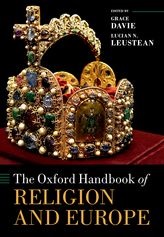 For a more detailed look at the situation, Coleman’s chapter on Ukraine and Russia in The Oxford Handbook of Religion and Europe (Oxford University Press, December 2021) is available here.

Three other panelists will participate in Religious Dimensions of the War Against Ukraine:

The Moderator for the evening will be John Martens, Professor of Theology and Director of the Centre for Christian Engagement at St. Mark’s College.

1 comment for “Timely webinar: Religious Dimensions of the War Against Ukraine”