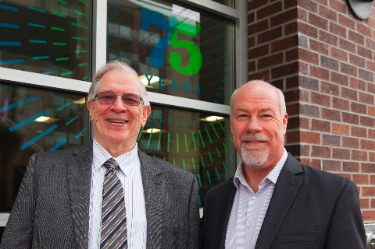 Maurice McElrea (left) led UGM for 28 years, until Bill Mollard took over in 2008. Both attended a gathering to celebrate UGM’s 75th birthday. Photo by Andrew Taran.

Union Gospel Mission (UGM) is 75 years old. Much celebrating was under way this week to mark the anniversary of the Downtown Eastside (DTES) landmark at 601 East Hastings Street – and two other nearby locations. (The Mission has operations in New Westminster and Mission, as well.)

Bill Mollard has been the UGM president since 2008. On Tuesday morning (February 24), joined by president emeritus Maurice McElrea, he made several ‘legacy’ announcements. A 75th anniversary logo was unveiled, along with announcements for a summer birthday party with the DTES community and a September milestone event with UGM volunteers and community supporters past and present.

“This is a historic year for us,” said Mollard, “and we want to pause and reflect with gratitude on this legacy. UGM began in response to the circumstances plaguing so many after the Great Depression. Since 1940, the faces have changed and the issues have become significantly more complex, but thanks to the care and concern of so many, UGM has been resourced to adapt to provide an evolving continuum of care to meet the needs of those on the margins today.” 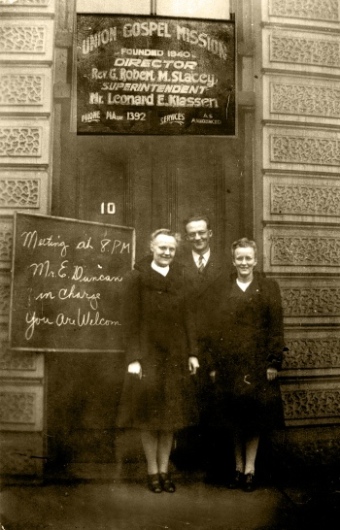 Before Mollard took the reins, there were three previous presidents. (Actually, they used to call them ‘superintendents’ – and that bit of information brought one of several recollections from McElrea, an Irish immigrant who was in charge at UGM for 28 years.)

Speaking to me by phone, McElrea recalled going “from soup to superintendent – and meeting the Saviour in between. The backstory to that quip is that shortly after arriving in Vancouver from Edmonton, on the caboose of a freight train, he headed off to UGM for a bowl of soup. In due course, he met the Saviour – aka Jesus – and that changed his life.

Some years later, after working for some of the big forest companies, he was asked to take over the mission from Len Klassen, who had run the place with his wife, Doris, for 37 years. (Klassen, now in his late 90s, lives in Abbotsford.)

The UGM founder was Bob Stacey, who later became a pastor and counsellor in several Washington and British Columbia churches. He was at UGM in the early 1940s; One feature of his tenure was a midnight service for people coming out of the beer parlours at closing time.

“When I started, there were two other staffers, two ladies,” McElrea said. “When I retired, the annual operating budget was $11 million – $14 million if you included the housing program.”

In those intervening years, many expansions took place but the core of the message was the mission’s middle name. As McElrea often put it when explaining UGM’s work to politicians and social workers: “The gospel is ‘good news’.” And the good news was that Jesus’s reach into peoples’ lives changes things – “just as it changed me.”

One of the first expansions was a housing project in Surrey where families could be away from the difficult influences that came with the territory of which UGM was a part. Central Mortgage and Housing (CMHC) money led to further relationships with CMHC to provide housing of various types.

Mission operations were started in New Westminster and Mission as well. McElrea remembers meeting with some in New Westminster who were complaining about UGM clients not being quite as sanitary as they could be, in what is often referred to as ‘the Royal City.’

His response: “I said that . . . the city had a responsibility to provide proper public washrooms. Later, I came across a photo of an establishment called the ‘Royal Flush.’ I photocopied it and sent it  to the [person who chaired the meeting], suggesting that maybe the Royal City could adopt that name” for whatever facility they might provide. 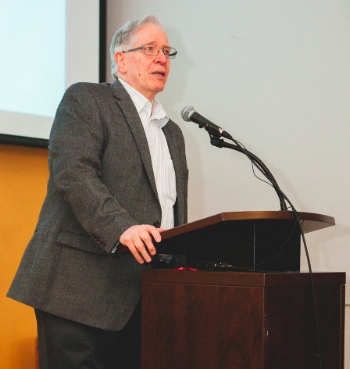 McElrea’s Irish brogue and humour often stood him in good stead, in struggles with others working in DTES who might disagree over how much God and how much psychology or sociology might be appropriate in working with broken people in a community where a lot of compassion was required.

But he tends to play down those battles, saying: “It is better to not to curse the darkness but to light the candle.” For example, UGM has always defended, in the face of criticism from government or other agencies, an “abstinence-based program. And we have pretty good statistics on recovery.”

As the years passed, he said, “as others could see that we treated people with respect, and not with condescension, there was more acceptance. Sometimes people would disapprove of ‘charity’ [being handed out]. Our response was that charity is rooted in grace. And all of us have accepted grace in our lives along the way.”

Good things come, too, in relationships among non-profits and government bodies, by a willingness – on both sides, he emphasized – to “create concessions and understanding.”

McElrea married his wife, Lois, in 1968. They have one son, a pastor. When, after being successful in the forestry business, he was offered the mission superintendent’s role, he and Lois talked about the challenge of his earning much less money. “It may mean that [we] might need to provide day care for a minimum of five children to keep up on the mortgage payments. She gladly did it,” he said.

Former forestry colleagues have told him, at times, about the vital role that UGM played in helping get former employees back on track. “One young Christian manager [in the resource sector] told me a lot of fallers, loggers and miners slid into that part of the city.”

One last story. In talking to the New Westminster leaders referred to earlier, he learned that some of them wondered “why some of the people [couldn’t just live under] Pattullo or Queensborough bridges. I said that some did just that. [I told them about] bringing one woman out from under one of those bridges, getting her to a women’s shelter. And now, she was running her own business.”

McElrea oversaw the four stages of building and expansions of UGM’s primary service location for 20-plus years – 616 East Cordova (now UGM’s Women and Families Centre). During his tenure further life-saving programs, including UGM’s flagship drug and alcohol recovery, were added. Also added were affordable housing (in Vancouver and in the Valley), thrift stores and the Mobile Mission. 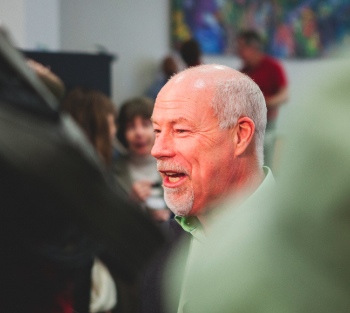 Bill Mollard has led UGM into a major new expansion since 2008. Photo by Andrew Taran.

In turn, in 2011, Bill Mollard oversaw the largest expansion in UGM history – the opening of a 70,000 square-foot multipurpose facility at the corner of Hastings and Princess, equipped to allow most of UGM’s programs to double and in some cases triple in size, providing much-needed life-saving support.

Since that time, UGM has established the Women and Families Centre and opened a women’s day shelter – which is now a 24/7 stabilization program for woman and women with infants.

UGM has adopted the hashtag #UGM75 for the year and will utilize #ThrowBackThursday to provide followers with a historic photo, memory or moment, once a week.

With files from Keela Keeping