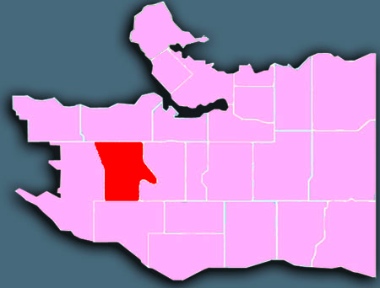 Arbutus Ridge is a comfortable area on the west side of Vancouver. It is bounded by Mackenzie Street on the west, Arbutus Street and Maple Crescent on the east, 16th Avenue on the north and 41st Avenue on the south. The neighbourhood straddles a north-facing semi-circular ridge above a low-lying section.

From the 2011 Census and the 2011 National Household Survey (comparative data for Metro Vancouver in parentheses).

Because detached houses predominate, along with duplexes and townhouses, this area has a higher than average concentration of families, mostly with teenagers. Many residents are relatively new, affluent Chinese immigrants. Arbutus Ridge ties with Strathcona for having the second-highest concentration of seniors in the city.

Surprisingly, the neighbourhood records significant poverty in its eastern and especially its south-eastern quadrants. Although there are a large number of low-income pensioners and students, some observers speculate the apparent rate of poverty may be skewed by residents who claim little or no Canadian income because their income comes from offshore. 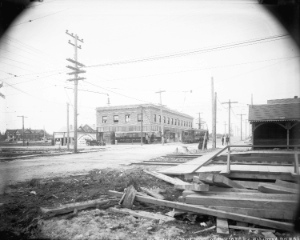 Valley Drive, which slices northwesterly through the street grid from Prince of Wales Secondary School to 16th Avenue and Trafalgar Street, was cut through the forest in the 1870s to provide the right-of-way for BC’s first logging railway. Much of the neighbourhood was included in the 1888 provincial land grant to Canadian Pacific Railway (CP) which had such profound effect on the city’s future shape and character.

The uplands area (Mackenzie Heights) was first to be settled, by middle class families who built comfortable homes on larger than average lots between 1912 and the 1930s. This contributed to the growth of the commercial hub at 41st Avenue and East/West Boulevards that became known as Kerrisdale, where city hall was located for the municipality of Point Grey before merger with Vancouver in 1929.

During the 1940s and 1950s the swampy bushland – which used to be called Asthma Flats – was filled in with sand from False Creek to make way for houses and three expansive school/park complexes. 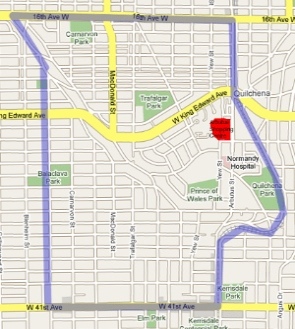 This map, focusing on the Arbutus Shopping Centre, is on the main page of the Arbutus Ridge Community Association (ARCA) website, above these words: “The City is intent on making massive changes to our area!”

Arbutus Shopping Centre is a modest plaza type mall on the west side of Arbutus Street, north of King Edward. Completed in 1974 and ringed with medium density housing constructed in the late 1960s. It is slated for redevelopment and densification as part of the contentious Arbutus Ridge / Kerrisdale / Shaughnessy Community Vision Plan crafted in 2005. For one reaction go here.

Some residents want to preserve the suburban quality of their streetscape above all else. Others believe that significant densification is the only environmentally sound way to make room for the tends of  thousands of new residents expected to arrive in coming decades. Still others believe that densification can only inflate property prices and further displace moderate and low income households.

The Arbutus Corridor is a strip of land running from False Creek to the Fraser River. It is owned by CP, which built the Vancouver and Lulu Island Railway Line out to Steveston in 1902 in order to carry commuters to the canneries there.

In 1999, CP announced plans to build townhomes, stores and green spaces along the line. Those plans have been resisted by the City of Vancouver, and a stalemate has resulted. The two parties have discussed a sale of the land, but CP is seeking $100 million (and claiming its potential value as $400 million), while the city has offered $20 million.

As well, while the city has the final say on development along the Arbutus Corridor, it lost a court decision earlier this year. Chief Justice Christopher Hinkson of BC Supreme Court wrote January 20 that “The City did not and cannot claim any property interest in the Arbutus corridor, nor can the City assert such rights on behalf of others in response to the proposed use of the corridor” [by CP]. 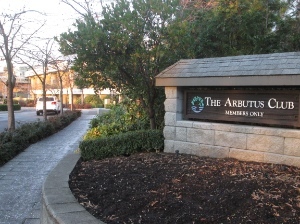 The Arbutus Club, which occupies a seven-acre site looking down Arbutus Street on Arbutus Village, costs $55,000 (plus tax) to join – although, “Once you have made the decision to become a member, and you have followed through with your financial obligations, you will be placed on the wait list.”

St. Mary’s Kerrisdale Anglican Church (opened in 1913) is a neighbourhood landmark and one of several important heritage buildings on 37th Avenue designed in the English Arts and Crafts Style.

The Hellenic Community Centre (including St. George Greek Orthodox Cathedral) on Arbutus, half way between King Edward and 33rd Avenue, is the centre of the Greek community in Vancouver, though it is located south of the original Greek enclave in Kitsilano.

Here are a couple of ways in which Arbutus Ridge churches are linked to their neighbourhood. The list is far from complete and we would love to hear about other examples: 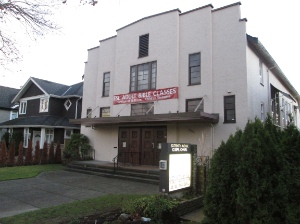 Sixteenth Avenue Gospel Chapel is on the northern boundary of Arbutus Ridge.

* St. George’s Greek Orthodox Church is just part of the Hellenic Community Centre, which “serves as a spiritual, educational and gathering place for all of its members and the citizens of Vancouver.”

* St. Mary’s Kerrisdale Anglican Church offers weekly sit-down meals for the community As well, its community donations committee works “with recipient agencies such as for children and youth, seniors, food and community health, churches and justice.”

* The Courier did several articles on Arbutus Ridge as part of a year-long series of articles on Vancouver neighbourhoods in 2013/2014.

* The City has an Arbutus Ridge page.