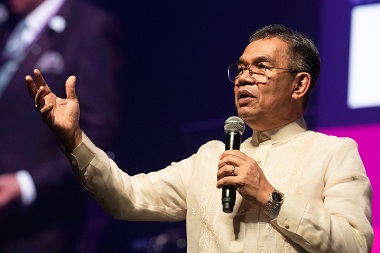 I have been at the General Assembly of the World Evangelical Alliance (WEA) for the past couple of days – which have been long (and rewarding) – so I will simply post the release by WEA chief communications officer Timothy Goropevsek for now.

The General Assembly started off with a colourful opening ceremony that saw 800 participants from 92 countries joined by several thousand Indonesian believers from across the country.

The General Assembly brings together WEA’s constituency of regional and national Alliances that represent local churches in their respective countries, and more than one hundred affiliated international ministries and organizations.

It is a global network that spans 130 nations and serves some 600 million evangelicals around the world, making it the second largest global Christian body today.

Held at the Sentul International Conference Center south of Jakarta, Indonesia from November 7 – 12, the GA is the first global gathering of such scale hosted by the WEA in 11 years.

The theme “Your Kingdom Come” inspired by Jesus’ prayer in Matthew 6 expresses the hope for the General Assembly to be a critical moment for evangelicals to come together to reflect and strategize how to fulfill Jesus’ Great Commission “to disciple all nations” by focusing on intentional, holistic disciple-making. 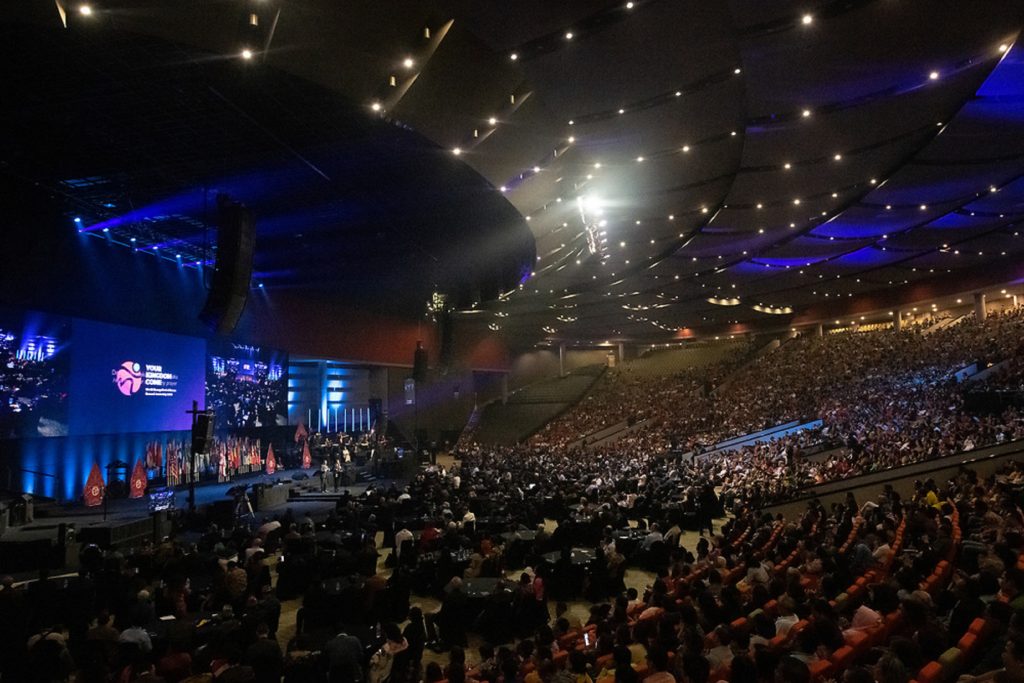 The 800 participants from 92 countries were joined by several thousand Indonesians for the opening ceremony of WEA’s General Assembly. Photo Timothy Goropevsec (WEA).

“Evangelicals are the fastest growing religious movement in the world in the last 60 years. And we want to thank God for what he is doing,” Bishop Efraim Tendero, Secretary General of the WEA stated in his opening remarks at the ceremony, and added:

As we gather for the next six days, we have the passion and desire to cry out to God, that as evangelical leaders, we all work together to advance the kingdom of God in our time.

We have carefully chosen Indonesia to be the hosts of our General Assembly because this is the country that has the largest Muslim population in the world, but there is also religious tolerance and harmony. And in Indonesia, the church of the Lord Jesus Christ is continuing to flourish and is having an impact in the society.

. . . we have been praying and crying for this moment and now I’m standing here, looking at all these international leaders who are united and have Jesus Christ as our Lord. This moment is truly a blessing to us.

The opening ceremony included cultural performances with video presentations and 150 dancers and artists introducing each region of Indonesia.

As a nation of “joy, peace and harmony” and a model of “unity in diversity,” Indonesia brings together thousands of tribes with hundreds of different languages in a population of over 270 million. It is also a country of vibrant faith that hosted global Christian events like the World Prayer Assembly among many others.

Pastor Dr Niko Njotorahardjo, a major Christian church leader in Indonesia and partner in hosting the General Assembly, shared in an address that “the WEA GA in this place is not by accident; I firmly believe it is the specific purpose of God.”

And added: “Jesus gave us His Great Commission . . . My friends, don’t forget God wants all of us to be disciples of Jesus. Disciples are the people whose lifestyles resemble how Jesus lived.”

The WEA GA will continue through November 12, with plenaries, discussions and workshops that aim to equip participants to strengthen their collaborative efforts in the area of intentional disciple-making.

It will also include the election of a new International Council and a presentation on organizational priorities for the coming years.

Follow @WEAGA2019 and #jakarta2019 to stay up-to-date with developments at the WEA GA.