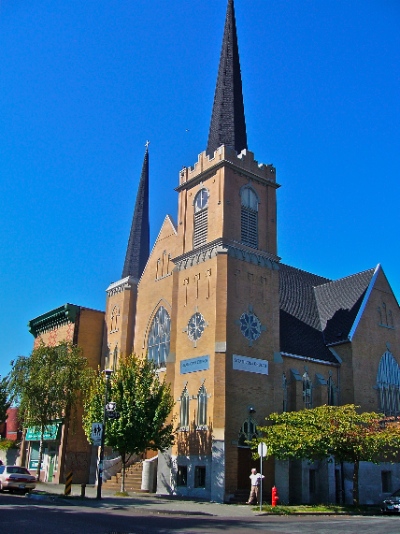 Strathcona Church will be home to at least three congregations, and they plan to work together for the good of their neighbourhood. The Chinese Library is just past the church. Photo by Frank Stirk.

After arriving in Vancouver from Hong Kong in 1976, Marion landed her first job with The Chinese Community Library Services Association in Strathcona, the city’s oldest residential neighbourhood. Then she worked for 30 years as a social worker in Chinatown that included six years as a realtor.

Fast forward to February 2013. Marion happened to see a newspaper ad about a church building for sale at 431 Princess Avenue in Strathcona. Immediately sensing God telling her to buy it, she went to take a look.

“Usually I’m very slow at making any decision. Then I saw the Chinese library next door. And it’s like a light bulb for me,” Marion said. “I asked God, ‘Is this like going full circle? Almost 40 years ago, and we come back here!’ I was shocked. And so it takes me almost no time, and I say, ‘Yes. I’ve got to do it.’” 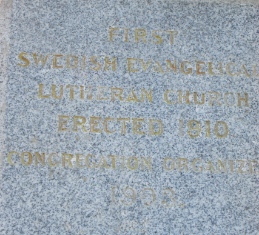 Strathcona Church is a heritage building, dedicated by First Swedish Lutheran Church in 1910.

Although a protected heritage building, the Korean owners had stipulated the buyer would have to promise to keep using it as a church. Marion not only agreed but went further, feeling led to make the building available to several churches on condition they dedicate themselves to the people of Strathcona.

She said, “I tell whoever wants to come in here, they have to be community-based, serving the community – ‘You’re not going to ship people to this church.’ That’s not what God wants me to do. I strongly feel that.”

It is a commitment Marion has kept, despite having to make extensive repairs to the building. “I had over 10 churches approach us wanting to come in,” she said. “Some even said, ‘We can pay your mortgage.’ But I said, ‘God will pay our mortgage. We will be loyal to the mission and vision that God gave us.’ I say no to a lot of churches.” Coastal Church was the first congregation to move into Strathcona Church; Dave Koop preached the first service at Easter.

The first to gain access was Coastal Church, launching its Strathcona campus April 20, Easter Sunday. This weekend, it will be joined by two more fellowships. On Saturday (October 4), a Chinese outreach team from Broadway Church begins meeting twice a month for prayer. And on Sunday, Mosaic, a nine-year-old offshoot of Tenth Church that ministers to the marginalized, will hold its first worship service there.

“Churches often tend to be non-permeable cultures,” said David Frost, Mosaic’s interim pastor. “We kind of lie on top of a neighbourhood like a plastic wading pool. It’s great if you’re in the pool but it kills the grass underneath the pool.” Instead, he believes Marion is looking for churches that would be “more like a greenhouse with a dirt floor.”

Just south of Strathcona Church is Lord Strathcona, one of the largest and oldest elementary schools in Vancouver. And to the north is Union Gospel Mission. Rob Thompson, manager of satellite and church relations, helped Marion write its charter.

“It is a key strategic location straddling Strathcona, straddling Oppenheimer,” he said. “They’re different communities with great needs. I’m almost of the mind to say that this church is situated for the healing of those two communities.” 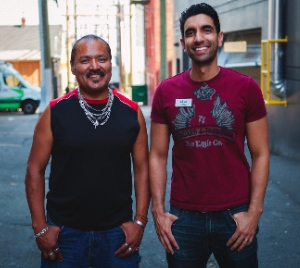 This may already have started. “A few weeks ago,” said Fari Maghami, Coastal’s Strathcona pastor, “we had two guys get water baptized. Just hearing their testimony of how God’s been moving in their lives, it’s been amazing, very encouraging.” Prior to becoming its pastor, Maghami was for six years a community outreach worker at UGM.

Beyond being individual tenants with a common mission, Marion believes God also wants these churches to eventually work together in reaching the community for Christ.

“Some of that’s going to be sharp elbows and people getting upset,” said Frost. “But I think a lot of good can come from this. We’re committed to be neighbours, and so let’s be in it together.”

That trust commitment extends to the few existing churches in Strathcona – most of them small – assuring them they have nothing to fear from these new arrivals.

“We believe,” said James Fam, Coastal’s executive pastor, “that as we meet with churches that are already established in that area, as they come to understand our heart, they will see our objective really is to complement what’s already taking place there.”

“I really admire what these churches are doing, so I don’t want to upset them too much,” Marion added. “I try to bring them together so they can use this space. But it hasn’t happened yet.”

Thompson nonetheless marvels at what God has already accomplished in Strathcona.

“There’s no way we could have written this script,” he said. “And I think that’s reflective of what will come, as these churches begin to come into relationship with one another. I believe God is going to use those relationships to not only bless the community, but to bless the people that are in those churches.”