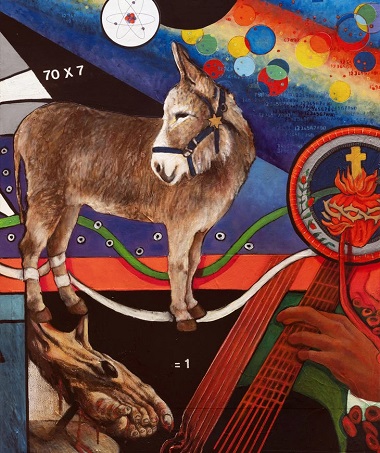 Detail from Betty Spackman’s ‘A Creature Chronicle’. (Used with permission.)

A unique exhibition with an impressive roster of artists, musicians, speakers – creative people of all types – will take place on a Langley farm over the next month.

Maaike VanderMeer wrote this introduction to Betty Spackman, the woman with the vision for A Creature Chronicle, for Christian Courier.

Daily advances in science and engineering are making it possible to alter humans mentally and physically. Our technological advances are quickly outpacing our ethics.

Betty Spackman, an installation artist residing in Langley, is drawn to the gaps between our philosophies, belief systems and technological abilities.

We accept pacemakers and functional eyes, “the crumbs of the beginning,” says Spackman. But what comes next? Spackman’s art asks us to consider carefully the future and what it means to be human.

Her work engages with transhumanism (the theory that humans can evolve themselves beyond our current limitations by science and technology) and posthumanism (a philosophy that sees humans as no longer being the sole moral agents in the world). 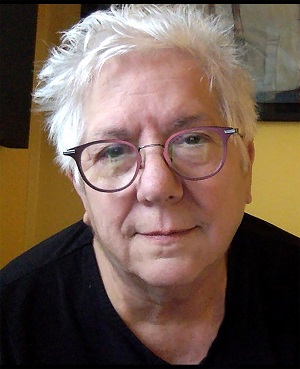 To spark the discussion, Spackman created a 24-ft wide, 8-ft high circular installation of painted panels. The installation, titled A Creature Chronicle. Considering Creation: Faith and Fable. Fact and Fiction. will be exhibited in Dennis and Jenny deGroot’s barn in Langley from April 22 – May 21.

Alongside the exhibition, a symposium will feature well-known speakers, storytellers, musicians and comedians for bi-weekly events.

The deGroots, who invited me to wander through their barn’s beautiful, high-beamed loft, said that this is the third year they have attempted the exhibition; “It is a true Covid-delayed event that only grew in importance and scope given the conversations around science and faith and freedom.”

A dragonfly and immortality

With a background as an animator and storyboard artist, Spackman designed A Creature Chronicle to be a non-chronological storyboard interweaving faith stories, science stories and art stories.

“The one place of true meeting with each other as different faith groups and scientists, is a place of not knowing,” says Spackman. “Which is a place of faith and a place of wonder.” 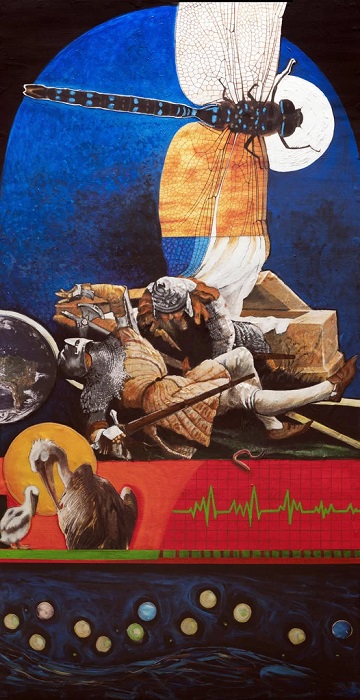 Betty’s adaptation of Matthias Grünewald’s ‘Isenheim Altarpiece’ places a dragonfly where Christ would be. (Used with permission.)

Spackman incorporated well-known paintings into the panels, like Matthias Grünewald’s Isenheim Altarpiece (1512 – 1516). Grünewald’s work depicts Jesus covered in plague-like sores and was installed in a monastery where people with diseases sought treatment.

Transgenics promises to alleviate suffering altogether, even offering science-based immortality. “Why is it, in our faith, that suffering is a gift?” asks Spackman.

In her rendition of Grünewald, Spackman replaced Jesus with a dragonfly, to her a powerful symbol of the possibility of resurrection (a dragonfly begins its metamorphosis underwater).

“If someone knows Grünewald and sees the dragonfly, they’re going to have to deal with Jesus as well, the first born of all Creation,” says Spackman, who avoided depicting the cross: “If I put Jesus there, they’re not going to see him.” Cliches render us blind. An artist helps people see.

In her rich visuals, I see St. Francis of Assisi preaching to a glow-in-the-dark transgenic rabbit “created” by Eduardo Kac in 2000. Giotto’s angel bends to touch (bless?) the diagram of a cybernetic human (a cyborg is both an organism – in this case a human – and a machine. “Can the Holy Spirit indwell the cyborg?” asks Spackman).

On another panel, an image of a uterus is next to the Superman logo, querying our desire to be “super.” It begs the question: “What would it mean if we can make a person without normal reproduction? How do we as Christians find a reconciliation with this technology?”

The imagery is accessible to all ages, “whether you’re five or 50 years old, you can go in and just deal with a whale and some pollution or, a robotic being and a real being. We all have associations that we bring to these images.”

The panels create a cohesive visual story, reflecting Spackman’s belief in an incredible creation of design and purpose. “We all have fragments of understanding in our minds and have our own stories, but we can come back to that place of wonder and awe.” 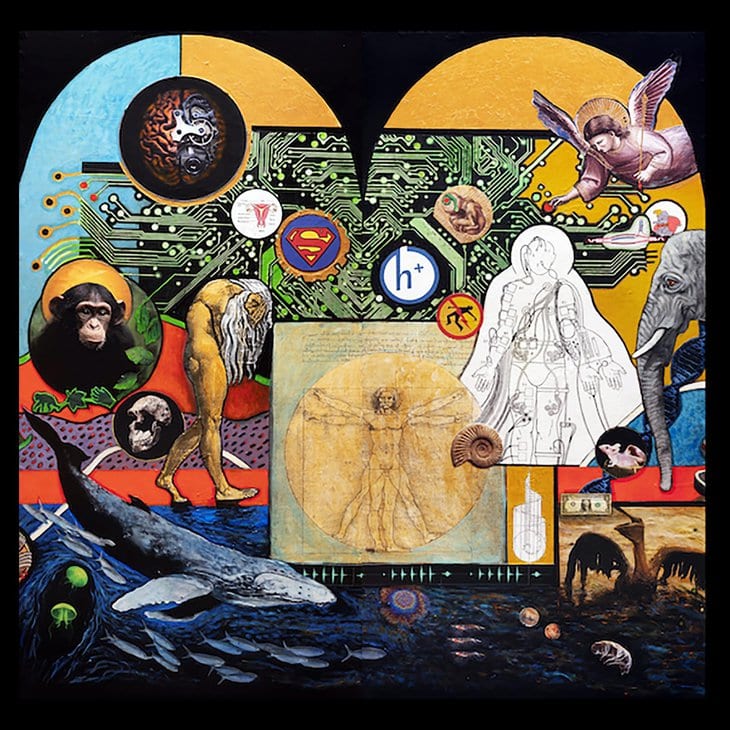 An angel reaches towards a cybernetic diagram, and Superman’s logo is placed next to a uterus on panels 10 and 11 of ‘A Creature Chronicle’. (Used with permission.)

I asked Spackman when the concept for this exhibition came to her. The short answer: it’s been percolating for decades. The longer answer takes shape around a story of bones.

Spackman moved back to British Columbia in 2004 for her mother. Eighteen months later, in bewildering succession, she lost her job, her mother and her dog.

Spackman had space in a barn studio, reams of felt and bones collected from fields. For the next five years, she pieced together a 3,000 sq-ft installation of bones exhibited in 2010 as Found Wanting. A Multimedia Installation Regarding Grief and Gratitude. The process raised questions, “with a dead animal, you’re dealing with all of these issues of killing and speciesism. That got me into the meat industry, genetic engineering and transgenics.”

A Creature Chronicle was conceived in Spackman’s van until her pension kicked in, allowing her to rent a studio. She exchanged a dragonfly painting for the first three panels and started going up and down ladders, pasting and painting, despite health issues.

Local art studios and Christian universities both fell through as spaces for the exhibition, which didn’t fit neatly into anyone’s institutional agenda. Then, “somebody that I met 30 years ago in Holland visits me in Langley and takes me down the street to meet my neighbours,” says Spackman, shaking her head in amazement at the timing of it.

The deGroots, neighbours she didn’t know she had, offered the use of their barn, a safe space where disparate groups can encounter the art. “This is so lovely for me, how God works.”

In Spackman’s long career of exhibiting internationally, this is the first one without a soundtrack other than human voices. 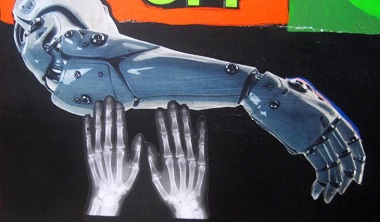 Detail from ‘A Creature Chronicle’ panels.

She quotes Jean Vanier’s three stages of love: we encounter the other first in distancing, then in benevolence and finally in wonderment.

Wonderment is “where we stand equal before God in humility and learn from one another. Where we’re not threatened, we don’t think God is going to crumble because we don’t have the right answer. This place of humility is the only position we can take to embrace the world and be embraced by the world.”

Spackman believes all of the symposium speakers will bring this “wonderment.” Many of them are paying their own way, some coming all the way from Europe. “They want to be involved in this conversation, and they trust what this is about. I think that’s amazing.”

For the exhibition schedule and live streams, visit www.bettyspackman.com. 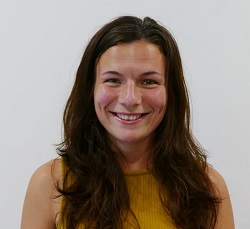 Maaike VanderMeer first appeared in CC’s pages as a teenage writer from Ontario. Fast forward almost a decade later (and relocate to a land-based fish farm in southern British Columbia), and Maaike stepped in as CC’s assistant editor for a year in 2021. Now she serves as Art and Development Manager.

She is intrigued by the symbiotic relationship between hope-oriented journalism and the arts. Her degree is in Intercultural Service and World Arts and she creates original watercolours and graphics for CC (proving that work can be fun). You can follow more of Maaike’s visual experiments on Instagram @maai_abrokentulip

This article first appeared on the Christian Courier site April 13 and is re-posted here by permission.

Following is an outline of the schedule:

Go here for full bios of the artists and speakers.

1 comment for “A Creature Chronicle: ‘Can the Holy Spirit indwell a cyborg?’”