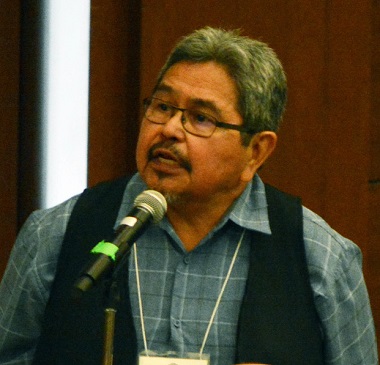 Local Anglicans made a bold move in the reconciliation process with Indigenous communities during their biennial synod gathering, May 24 – 25 at the Italian Cultural Centre.

Their “gesture of restitution and reconciliation” mandates that a portion of proceeds from land sales will go to Indigenous Nations and to Indigenous ministries.

Communications officer for the Anglican Diocese of New Westminster, Randy Murray, described the resolution as “arguably the most compelling” one passed during the gathering.

Andrew Stephens-Rennie, director of ministry innovation at Christ Church Cathedral, gave a sense of the support behind it when tweeted his enthusiastic response:

Wow! Excited to see @DofNWComm adopt this resolution and take this step ensuring that a percentage of the sale of any church properties on these unceded territories are returned to local #Indigenous nations, and set aside for Indigenous ministry, #justice, and #reconciliation.

Resolution 5 was moved by Al Carson, rector of St. John Sardis and seconded by Vivian Seegers, ordained leader of the Urban Aboriginal Ministry headquartered out of St. Mary Magdalene. Here is the text: 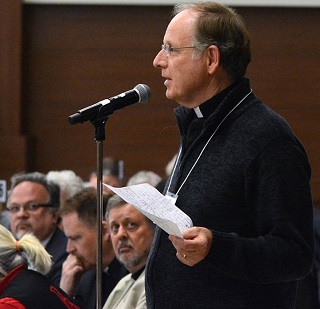 That in a gesture of restitution and reconciliation guided by our baptismal covenant, the Five Marks of Mission, the biblical jubilee and our diocesan commitments to Indigenous justice; Synod requests Diocesan Council, the Management, Finance and Property Committee and the Mission and Ministry Development Committee create mechanisms and expedient reporting for the direction of funds from the sale of/future sale of any properties and buildings since January 1, 2018 such that:

The next resolution determined that Urban Aboriginal Ministry will be the recipient of care+share funding (that is, voluntary contributions made by parishes and individual Anglicans) in 2020 and 2021.

Note (May 30): Douglas Todd has just written a good column about the situation: Metro Vancouver Anglicans to direct millions to Indigenous efforts. He points out, for example, that three churches were sold in 2018 – St. Mark’s (Kitsilano), St. Margaret’s of Scotland (Burnaby) and St. Monica’s (Horseshoe Bay). He also interviews Nii K’an Kwsdins (Jerry Adams), who raises some questions about the decision.

As it happens, this is a good time to learn more about local Indigenous culture; below are descriptions and links to a couple of timely museum exhibits and several interesting and helpful articles.

MOV: The City Before the City

The Museum of Vancouver on Kits Point has a number of galleries devoted to Vancouver’s history. The first is c̓əsnaʔəm: The City Before the City. If reminds us how different things were on this land, and how recently.

Here is part of the description:

The curatorial premise of this project is simple: the bone, stone, and shell objects from c̓əsnaʔəm, which have survived thousands of years, are great catalysts for conversations about the relationship between Indigenous and settler societies in the City of Vancouver.

They are reminders of the connections between the history of colonialism, and the continuum of Musqueam culture. During the 1920s and 1930s, the Art, Historical and Scientific Association of Vancouver (MOV’s predecessor) undertook excavations at the Marpole Midden and removed over 1,500 “artifacts” for the museum’s displays, discarding others.

The presence of these objects or “belongings” as this exhibition calls them since they were, in fact, personal possessions and ancestral remains in the museum’s collections point to an unsettling history. The museum constructed a story about Vancouver’s past that distanced and excluded the Musqueam, viewing the village as an ancient forerunner to the City of Vancouver instead of as a place of ongoing significance to Musqueam.

This exhibition re-examines the historical collection and display practices of the museum itself within this context of colonialism. 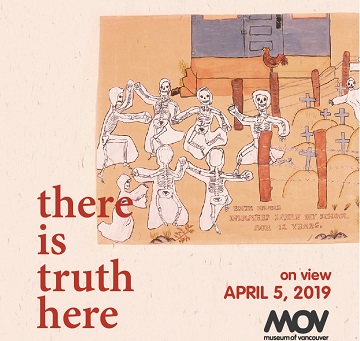 If you visit MOV now,  you can go straight from The City Before the City to There is Truth Here, which celebrates ‘Creativity and Resilience in Children’s Art from Indian Residential and Day Schools.’

The focus of the exhibition is not on the schools themselves, but upon witnessing the experiences of the survivors as conveyed through their childhood artworks – for some the only surviving material from their childhoods.

These displays are not from the Metro Vancouver area, but they do shed light on the situation for Indigenous people throughout BC. Go here for a good story about the exhibit on CBC News. 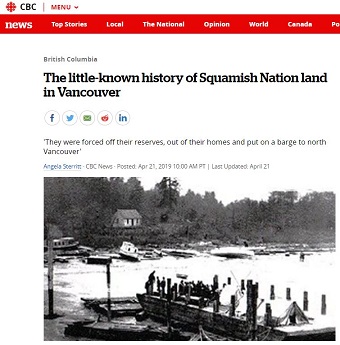 The fact that Indigenous people lived in Kitsilano has been largely ignored over the years, but is finally making the news because the Squamish people are planning to develop land they owned, lost and reacquired. Again, CBC News has done a good job telling the story, in this April 21 article by Angela Sterritt:

The Squamish Nation’s proposal to build up to 3,000 apartment units southwest of the Burrard Bridge is shedding light on the historic ejection of members from their traditional territory in the area more than 100 years ago.

The area in question is west of the Molson Brewery site, near Vanier Park on the False Creek waterfront, in Kitsilano. . . .

The land the Squamish Nation wants to develop was once part of an ancient village called Sen̓áḵw that was home to about 20 Squamish families or 150 people.

In 1877, under the Indian Act, the federal government allotted about 34 hectares of the land to the Squamish Nation and called it Kitsilano Indian Reserve no. 6. . . .

In 2000, the nation voted in favour of a $92.5-million land-claims settlement and the return of 4.7 hectares of reserve land. The Squamish Nation thus, in 2002 regained a small section of the earlier reserve, today’s Kitsilano Indian Reserve No. 6.

This is the area the Squamish Nation is proposing to build on today. 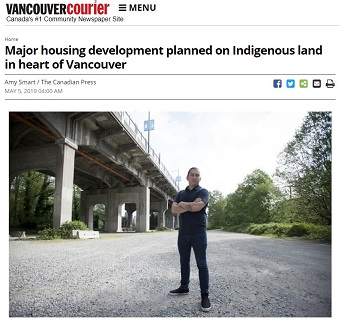 Amy Smart spoke to Squamish Nation councillor Khelsilem (Dustin Rivers) for a May 5 Vancouver Courier article. He spoke about the Kitsilano project, but made it clear they have bigger plans:

The MST Development Corp. is a partnership between the Musqueam Indian Band, Squamish and Tsleil-Waututh First Nations. The three bands are full or co-owners of six prime properties throughout Metro Vancouver, covering more than 65 hectares of land available for development valued at over $1 billion.

Among its largest developments, the corporation is beginning consultations on the 36-hectare [about 90 acre] Jericho Lands in West Point Grey.

The Musqueam are also planning a 1,250-unit, mixed-use development near the University of British Columbia and the Squamish act as landlords to the Park Royal shopping centre on its reserve land in West Vancouver.

Khelsilem said the Park Royal project has provided income that the First Nation can use toward other things, like housing, and the Burrard project is expected to be a similar “money tree” on a much larger scale. 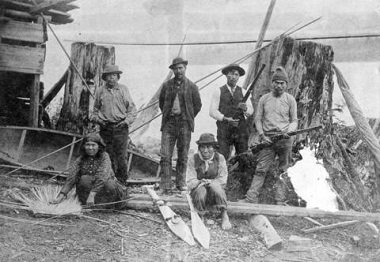 I attended an Inspire Jericho Talks event May 23 during which “author and urbanist Jeff Speck discussed the many benefits of shaping neighbourhoods to support walking, biking and transit,” especially in relation to the giant Jericho Lands project.

Squamish elder Syexwaliya welcomed guests on behalf of her people. In the course of that welcome, she said:

I’m inspired by Jericho because in the old days, before Vancouver . . . that’s where my great-grandfather Chin-nal-set lived. . . . Priests gave him a name . . . Chin-nal-set became Jericho Charlie.

One day a German gunboat came along and started taking apart  . . . the longhouse and they numbered it . . . like paint by number, but this was like a lego number . . . numbered it, loaded it on the gunboat and took it back to Germany. My grandpa [Dominic Charlie] always said, ‘Maybe you’ll get to Germany one day and go find my father’s longhouse, because they numbered it so they could rebuild it exactly the proper way.

I had never heard of the man for whom the beach was named, the longhouses or virtually anything related to Indigenous culture in the area, despite growing up directly above Jericho Beach.

Go here for a video of the evening with Jeff Speck; Syexwaliya’s welcome begins about the 13 minute mark; she also describes some of her family’s sojourn from Jericho to Sen̓áḵw (Kitsilano) to the North Shore.

Finally, Christopher Cheung has just posted a very helpful article about the Jericho Lands on The Tyee: ‘Here’s What We Know About Vancouver’s Huge New West Side Development.’