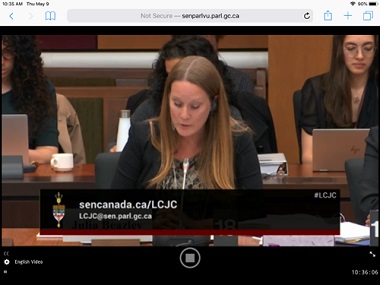 Julia Beazley represented the EFC when she appeared before the Senate Legal and Constitutional Affairs Committee May 8.

Everyone agrees that the court process is slower than it should be. The Liberals have proposed a massive piece of legislation (Bill C-75) which is intended to deal with that problem.

The bill has passed Third Reading in the House of Common and is now before the Standing Senate Committee on Legal and Constitutional Affairs.

There have been objections to the bill from both left and right; the Conservatives and NDP voted against it in the House of Commons

The Evangelical Fellowship of Canada (EFC) has watched the progress of the bill carefully, and has concerns about several elements.

They question the ‘hybridization of offences,’ which they say tends to make those offences seem less serious. Among the proposed Criminal Code changes they are most concerned about are those related to sexual exploitation and assault of clergy.

It begins with these words:

We are very concerned that Bill C-75, which will soon have its Third Reading in the Senate, proposes to make several serious indictable offences into hybrid offences.

Criminal laws give expression to the norms that undergird a society. They express and reinforce the basic commitments that bind a society together. It is often said that the law is a teacher. We must carefully consider the implications of changes made to the Criminal Code.

The categorization of a criminal offence tends to indicate the seriousness of the conduct it addresses. Hybridization suggests an offence can now be considered less of a violation of human dignity, less of a threat to society and social cohesion, and less harmful to the vulnerable among us.

We submit that to hybridize offences dealing with human trafficking, sexual exploitation and assault of clergy, as proposed in this bill, would both send the wrong message and negatively impact the administration of justice.

Human trafficking and sexual exploitation constitute a grave violation of human rights, and the gravity of these offences must be consistently reflected in our laws and policies. . . .

The Evangelical Fellowship of Canada (EFC) is “the national association of evangelical Christians in Canada. Our affiliates include 44 denominations, more than 70 ministry organizations and 36 post-secondary institutions. Established in 1964, the EFC provides a national forum for Canada’s four million Evangelicals and a constructive voice for biblical principles in life and society.”

← Anglican land sales to benefit Indigenous Nations – who have their own projects
New Hope cares for refugees, and can help you do the same →