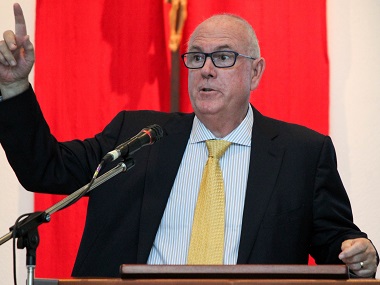 Veteran pollster Angus Reid used results of recent research to encourage people of faith to exercise good communication skills, link together across the faith spectrum and exercise leadership rooted in hope, when he delivered the annual Carr Lecture in the chapel of St. Mark’s College at UBC May 1.

He told close to 200 lecture attenders at the Catholic college that among the many words used by both believers and non-believers to delineate religious ideas, the terms “forgiveness” and “mercy” found much warm resonance among people drawn to faith. (And Pope Francis understands that, he opined.)

Words like “religion,” “evangelism” and “original sin” tended to be less understood or even misunderstood, Reid added.

The basis for the pollster’s lecture was recent research that the non-profit Angus Reid Institute has done in cooperation with Cardus, as part of the faith-based think tank’s Faith in Canada 150 project. Details on the results of that research are accessible under this heading: A spectrum of spirituality: Canadians keep the faith to varying degrees, but few reject it entirely.

He explained that the research commissioned by Cardus was based on surveys of 2,000 Canadians, led by institute executive director Shachi Kurl. Over 80 percent of those surveyed had some relationship to Christian roots. The remainder’s connections were with other world religions. The ratio approximates reported Canadian breakdowns.

Many questions were posed in the survey, and seven were chosen to help identify four groupings into which Canadians fit on the faith spectrum. Those seven questions, slightly edited, are: 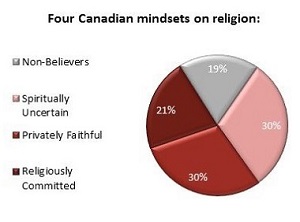 Simply put, the four categories which could be used to define Canadian society from a faith perspective – and some of the related findings – were as follows:

“[The religiously committed] tend to be socially conservative on many moral issues but tend to swing left on many economic issues,” Reid said. 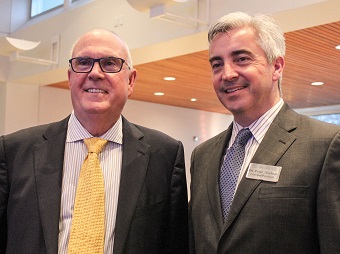 On a personal level, Reid paid tribute to Father Henry Carr (after whom the Carr Lecture is named), a Basilian who played major roles in Catholic higher education in Ontario, the Prairies and British Columbia during a large part of the 20th century. He told how a 19 year old woman studied ethics and philosophy under Carr and went on to be a devout Catholic, a mother of seven and a very smart person.

“And that woman was my mother,” Reid noted.

Lloyd Mackey is a leading writer on religious faith in Canada, and senior editorial advisor to Faith in Canada 150′s Thread of 1000 Stories. This article was originally posted on Convivium and is re-posted by permission.

For another take on Angus Reid’s talk, by Damon Mak, go here.

1 comment for “Angus Reid addressed the Canadian ‘spectrum of spirituality’”