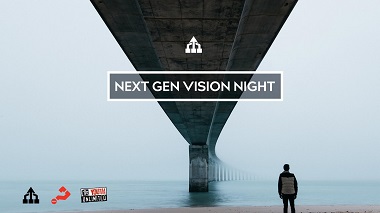 The Chapel Movement held a Next Gen Vision Night last Friday (April 28), in order to share what they have been up to over the past five years with the wider community. Following is a transcription of part of the presentation by Jonathan Mitchell, who leads Chapel. Go here for the full video presentation.

There’s Chapel, there’s Alpha, there’s Youth Unlimited, and there’s many churches involved too – there’s a real move of unity in Vancouver that just can’t be denied, and I’m really excited about it. So, with all that’s been going on, we thought it’s pertinent now to start having times where people can just get in the know of what’s going on.

This whole move of unity kind of happened by accident in some ways. We’re realizing that one part of the story – I don’t know if bottleneck is a good word – but one of the ways forward in what God’s up to, is just more people knowing about it, that there’s something going on.

I spend a lot of time meeting with youth pastors, going to youth pastors’ houses, sitting with them, and the kids hear a lot about stuff at Chapel worship nights. But we realized that there wasn’t a place that people could just come and hear about what was going on, like maybe parents or senior pastors or just other people who are curious.

With the potential of what God is doing with this unity, we just need more people to hear about it. . . . 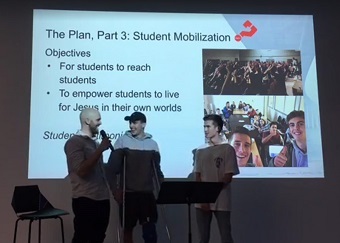 To have invitational high school ministries in every high school in the Lower Mainland that are student-led and closely supported by a Youth Pastor / Worker who is in relationship with other Youth Pastors in their area.

He clarified the main elements of the vision statement:

I don’t know about you, but when I was in high school, there was a ‘Christian club,’ but for me it was just pizza and pop. Maybe someone would have thought of something interesting to say, crack open a Bible verse. That’s a beautiful thing; I loved it, went when I had time and there wasn’t something better going on. But it was not invitational.

In the high school:

The second word that’s important is that they actually happen in the high schools [there are 92 in this area], they happen where students are. . . .

If there was an invitational high school ministry that had a chance of seeing the gospel preached, that means that every single teenager in the Lower Mainland is one invite away from a gospel presentation – which is a crazy thing to think. I just love that; that’s totally unprecedented.

Student-led is huge because what God really seems to be doing is putting students on the front line. I run a youth ministry. I don’t know if you have seen this, but there’s a lot of ‘come and see, bring your friends, it’s going to be great, no really, this one’s better than the last one.’ Youth ministries do their best to drag people out of their worlds and bring them into ours. I’m not saying that needs to stop, but there’s something about students leading something that just changes them.

Supported by a youth pastor / worker:

This to me is really where the front line is going on. It’s good to have student-led things, but then what is the role of youth workers and the people that are in charge for seeing that these ministries happen in principle. They are essential.

In relationship with other youth pastors:

I don’t know about you, but when I was in high school, things were really, really lonely. I was pretty convinced I was the only Christian, maybe one or two others. There were things going on; people were trying to live for Jesus in my high school. I just didn’t know who they were, and if I figured out who they were, I didn’t really want to help because I’d have to stick my neck out on the line.

But the problem was that my youth leaders weren’t in relationship with any of the other people trying to do stuff in that high school campus. If someone had said at the time, go follow Graham – Graham Goertzen from Youth Unlimited at John Oliver Secondary – into hot water, and try and reach people, I probably would have seriously considered it. But Graham was mostly this guy trying to recruit me to do something that actually I didn’t really want to do, because it was hard.

It would have made all the difference in the world if youth pastors were talking with each other, they knew who was looking after our school and they actually started to speak well of the leaders who were trying to do something. Because not every youth pastor has their hands in the probably eight high schools that the kids in their youth groups go to. Being in relationship with other youth pastors is massive if we’re going to see momentum happen on the school campuses.

I don’t really know if this is the best plan, if it’s going to work – but it’s a plan to try and mobilize students. It would be unprecedented to see something happen that is ubiquitous for youth ministries all across the city. To work toward something that everyone participated in the same plan for mobilizing students; that’s the crazy, audacious vision.

So here’s the plan:

The first aspect of the plan is this thing called Chapel. Chapel started with just a bunch of kids worshiping from a bunch of churches, in a local church. Then it grew and we filled a high school. Back in that time, we thought it was going to be the answer – BC Place was only a couple of years away, this is the best thing ever!

Some stats, in case you haven’t heard of it. There are six local worship nights that gather youth groups right now, in Vancouver, Richmond, Tri-Cities, North Shore, Surrey and Langley; potentially Maple Ridge coming up in September. There are about 1,500 kids coming on a monthly basis, when you add them all up.

So that’s great, but what is the purpose of it?

It is relational; it continues to be the place where people just seem to meet for the first time. You’d be surprised how many people just come out of the woodwork because a worship night is something we can all agree on.

It is cultural. It’s very difficult to mobilize kids in high school without some kind of stage, without some kind of gathering point, without something that’s saying what the vision is. We’re trying to shape that culture. Often we have kids share what they’re trying to do in high schools. It’s amazing what happens when you start rubbing shoulders; there’s this ‘tribal identity.’ There’s the family of the church, then there’s this tribe, where these families are coming together and the people of the city are saying, ‘Oh, these are my tribe.’

It is a really spiritual thing to worship together. When the youth pastors hubs started to form and especially when we started doing the Alpha stuff, the togetherness really started to matter. I was kind of, maybe we could stop doing these Chapel nights. They’re tons of work, kind of expensive, what is the point of just coming together. And it was really encouraging because a lot of the youth pastors that were involved at the time said, ‘No, wait, the kids have to see it, the students have to look around and see it.’

Youth leader hubs are monthly gatherings of youth leaders in each city. There are currently seven meetings, with approximately 50 average total monthly attendance. They just start getting into the nitty-gritty. Okay, so the kids are excited, what do we do?

Mark, who leads the Richmond-Delta hub will tell us a bit about the why:

I want to talk about micro vs macro. When I was a youth pastor, it was really about my church, my kids, what’s happening in the high school that I’m close to. It was a very small perspective – really important, but a small perspective. What happens at a hub is, we come together, difference youth leaders, different youth pastors, different backgrounds, and we change our perspective from our individual – my church, my youth group – to what is God doing in the high schools, what is God doing on the macro level.

It looks a lot like Alpha, but don’t hear me pitching Alpha so much as I’m pitching just an invitational high school ministry – of which Alpha is probably the best option currently.

Here are the stats for the 2016/2017 school year: Two hundred students were trained to run Alpha Courses in 50 of the 92 high schools. [Some 80 percent were completed; there were some issues with the administration in Richmond which prevented the completion of the courses there.]

Why did we decide to do this? Students reaching students, that’s the heart. There’s no ceiling to a student who goes, ‘I’m capable, through the Holy Spirit’s power, of being the hands and feet of Jesus, in my world.’ What we dream about, the bullseye of the Chapels, of the hubs, is a discipleship movement where the next generation understands that the Holy Spirit is with them and that they can share the gospel with their friends.

When we trained for Alpha in the high schools, we said there’s a really good chance nobody gives their lives to Christ throughout these Alphas. Maybe nothing, maybe nothing happens. But I’m still in, because we have a bit of a crisis right now.

Youth group’s getting amazing, youth group’s fantastic. But the thing that I am so scared to do is create a missional youth group, because you’ll lose the fringe kids. I’ve gotten the email from the parent who says, ‘Johnny doesn’t want to come to youth any more because youth isn’t as fun.’ He doesn’t want to do it. That makes me as a youth pastor want to shut everything missional down. You fix that problem. Cause it’s your job, and it’s scary.

But there’s something going on here; I think we need to empower students to live for Jesus. They learn things that just can’t be taught. You go into the high school and your heart breaks for something. Jesus and the Holy Spirit are with you in your own world; taste of that there, and it will stay with you in a way that sermons just don’t.

There are three things that I’ve learned. They don’t have anything to do with Chapel, they have to do with what I believe the Holy Spirit has already been working in people’s hearts, that Chapel is just giving a face to. It’s just the current expression of what the Holy Spirit is doing – and when Chapel dies, it doesn’t matter, because God is building a relational network:

2. The right problem. Nothing is more exhausting than presenting a solution to people who aren’t aware of a problem. What I pray God is doing is giving us the right problem – and the right problem is that youth ministries aren’t gaining traction, and we’re losing the next generation very, very fast, and there are huge walls between churches. I think those are good problems to swing at, together.

One of the main things holding us back right is awareness – and the second thing is money. [Eric Ens, director of operations for Youth Unlimited, addressed the latter issue. His presentation is about the 50 minute mark of the video.]

There will be a Chapel Conference at Westside Church October 19 – 20, “combining training and experience with a practical plan.”

For a couple of earlier articles on Chapel go here and here.