Barry’s most recent book fleshes out in greater depth and detail his ongoing reflections on these multilayered issues.

A Faithful Public-Prophetic Witness begins with a thoughtful and engaged meditation on the challenges that will confront those who dwell in the midst of such a commitment. Barry ponders three possible areas worth turning to for wisdom and insights: the Toronto Christian Resource Centre; Victoria’s The Open Door, Our Place Society and Dandelion Society; and Vancouver’s Streams of Justice.

This timely and timeless book concludes, rightly so, with lessons learned from such in-the-trenches urban life and a chapter on ‘What Constitutes Success in an Urban Ministry?’

The answer does hold before the reader and those in the thick of urban ministry a legitimate and perennial question – how, indeed, is such success to be measured within such a lived reality, and is the notion of success a word worth the using in such a context.

The three sites that Barry visits (Toronto, Victoria, Vancouver), although different in many ways, share certain affinities in their obvious challenges. Each of the chapters does significant dives into the more demanding details of such lived communal realities – ideals held high, but never easy to maintain over the longer journey.

Chapter four is particularly pertinent to the Metro Vancouver area. Grandview Calvary Baptist Church (GCBC) has been at the forefront in being a public-prophetic witness at a variety of levels: educational and activist. As a Baptist congregation, it has, in many ways, significant affinities with Tommy Douglas and Martin Luther King Jr.

Streams of Justice (SoJ), which grew out of a series of seminars on the nature of poverty and homelessness at the church, has faithfully attempted to embody grass roots activism. Barry, to his credit, reveals the journey of GCBC-SoJ as they have, in their faithful way, lived a honest yet imperfect witness in the inner city of Vancouver (with the Downtown Eastside a focus).

The title of the book speaks much, as does the subtitle. The urban church (particularly the urban church that works with those on the margins) is meant to be faithful, but faithful in a way that is both public and prophetic – certainly not an easy vocation. The subtitle sums up such a reality – being dynamic, with ongoing challenges and multiple ambiguities, success is, in many ways, protean and ambiguous, transient and fragile.

There are, of course, many successful churches – if success is measured by numbers – but to be a successful public and prophetic church is yet a deeper challenge. Much more maturity is needed indeed. When success is measured not by numbers but by ethical and prophetic integrity, the numbers do dwindle to the faithful few, who themselves are so often tempted by the demon of failure – a consistent tempter). 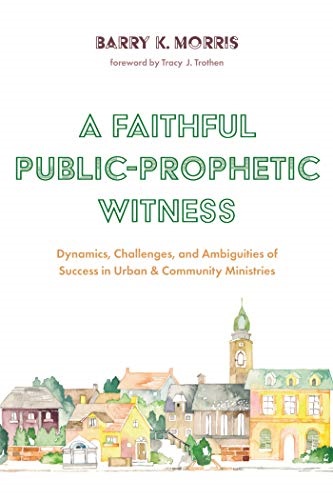 A Faithful Public-Prophetic Witness is a fine companion to Barry’s earlier must-read books: The Word on the Street (1991) and Hopeful Realism in Urban Ministry (2016).

Barry is one of those rare yet needful people who are both in the centre of the demanding fray yet also have the wits to reflect and ponder what makes for a meaningful exegetical and theological way to journey onward.

There are activists who tend not to think too deeply and intellectuals who ever play a chess game with ideas but rarely enter the fray.

Barry, to his credit, has lived such a trying tension, and, in many ways, A Faithful Public-Prophetic Witness reflects such a tightrope walk well done.

← Growing food: unearthing the church’s response to physical and social hunger
Where are the goalposts now? Christian theology on sexuality in a changing world →