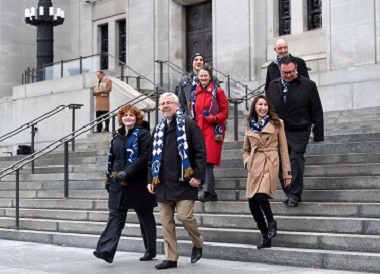 The team from Trinity Western at the Supreme Court, Janet Epp Buckingham in the centre, then-president Bob Kuhn in front.

Two years ago the Supreme Court of Canada put an end to Trinity Western University’s plans to develop a law school.

The ruling was a sobering demonstration of the fact that our legal and political leaders have turned their backs on traditional views of sexuality over the course of just a couple of decades.

Janet Epp Buckingham has just written a very helpful reflection which explains why the plan seemed very realistic and why it foundered in the midst of quickly-changing public standards related to sexuality.

The article first appeared in the August 2020 issue of the Evangelical Review of Theology, the World Evangelical Alliance’s “journal of theology and contemporary application.”

Following are excerpts from the introduction and conclusion of the article. It is well worth reading in full.

In the last 20 years, as LGBTQ rights have greatly advanced, claims to religious freedom that conflict with these rights have been eroded.

This paper considers the case of Trinity Western University, which was denied the right to establish a law school by two provincial law associations and the Supreme Court of Canada, and the implications for Christian behaviour in cultures that have shifted away from traditional views of human sexuality.

Many Christian institutions have been legally challenged if they refuse to accept the new normal of same-sex marriage. Where are the goalposts? Is there still respect for traditional Christian theology on marriage and sexuality?

Trinity Western University (TWU) is a Christian university located near Vancouver, British Columbia, Canada. In the 1990s, the university developed an education programme and sought accreditation. It was denied on the basis of its code of conduct, which prohibited homosexual intimacy. The university challenged this denial in court and won at all levels, including the Supreme Court of Canada in 2001.1

In June 2012, TWU submitted a law school proposal for accreditation. The proposal was very controversial because the school’s community covenant, although it had undergone some revision since 2001, still required staff, faculty and students to agree to refrain from sexual intimacy outside heterosexual marriage. The law school proposal was rejected. TWU brought legal challenges and ultimately lost at the Supreme Court of Canada in 2018.2

Today, there is a School of Education at TWU but no School of Law.

How could there be such a radical shift in 17 years that the Supreme Court of Canada would reverse itself? TWU placed heavy reliance on the previous precedent and thought that lawyers and courts would respect a decision by the highest court in the land. It was bitterly disappointing that the Supreme Court itself did not uphold its previous decision.

During the education case, TWU’s faculty and students solidly supported the university and its position. This was not the situation in the law school case. Alumni were divided. Some faculty spoke publicly against the university’s position.

In light of social pressure and divisions in evangelical Christianity, is there still a place for traditional beliefs and practices with respect to sexuality and marriage? This paper will explicate the experience of TWU through the eyes of a professor in the midst of it. I conclude with some thoughts on whether orthodox theology on sexuality will be tolerated in Western countries such as Canada and how we can respond. . . .

This paper has examined the moving of the goalposts concerning the balance between religious freedom and LGBTQ rights at three different time periods.

In 2001, a Christian university’s right to establish its theology and religious practices on marriage and sexuality was respected. The Supreme Court of Canada ruled that these factors could not be used to restrict the approval of new programmes at the university.

In 2005, when same-sex marriage was officially recognized by the Canadian government, the legislation specified that ‘diverse views on sexuality’ were not contrary to public policy. Again, Christians’ theology of sexuality and marriage was recognized and respected.

By 2018, however, the situation had changed, and holding to a traditional Christian theology of sexuality and marriage could be considered a bar to approval of new programmes on the basis that they created inequality for LGBTQ persons who may wish to attend the university.

There has been a progressive narrowing of the scope of religious freedom when it comes into conflict with LGBTQ rights. During the Supreme Court of Canada hearing, one lawyer argued that institutions that refuse to recognize equal rights for LGBTQ persons, regardless of whether they are rooted in religious beliefs, should lose all government benefits and recognition.

Although the court’s ruling did not comment on that argument, it may be a harbinger of where Canadian society is headed. The goalposts are shifting, and where they will finally end up is not yet certain.

Given the cultural, legal and political realities, what should Christian organizations do?

Richard Niebuhr’s five models of Christian interaction with culture are helpful here.26 Separatists distance themselves from culture and continue to hold to traditional beliefs, engaging in minimal interaction with the state. At the other end of the spectrum lie culturalists, who would decide in cases like the TWU case that this is not a ‘hill to die on’ and would simply change or remove policies dealing with human sexuality. Dualists would take a similar approach. Synthesists and conversionists would both try to maintain their beliefs while engaging with their culture in positive ways. Synthesists might try to model positive heterosexual marriages; conversionists might engage with political and legal leaders to encourage them to accept the diversity of beliefs and practices around marriage.

Christians no longer influence culture and public policy as they once did in the West. In Canada, evangelical Christians constitute a very small percentage of the population.

Organizations wishing to maintain a traditional view of marriage will find themselves marginalized and may have to accept the separatist stance of staying at a distance from government. For a Christian educational institution, this may mean foregoing not only government financial assistance but possibly accreditation as well.

Christian organizations must recognize the challenges in advance and plan their responses. If an organization has a clear plan and has determined where it is willing to compromise and where it will stand firm, this clarity may prevent internal conflict and public dissension. The battle for public opinion is vital, so it is crucial to choose and train spokespersons in advance.

Although we do not know where the goalposts will move, Christians know what they believe and why. Jesus sent out his disciples with these instructions: ‘I am sending you out like sheep among wolves. Therefore be as shrewd as snakes and as innocent as doves’ (Mt 10:6). This instruction is as relevant today as it was two thousand years ago. 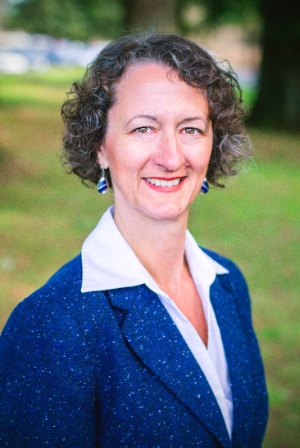 Janet researches and publishes on religious freedom in Canada and internationally. She is also interested in the relationship faith, public policy and the legal system.

She said in the article:

For me personally, this experience has been very challenging. I first approached TWU with the proposal of founding a law school in 1993, when I was the executive director of the Christian Legal Fellowship. I felt the development of the law school proposal was my calling, and it was a longtime dream for both Kevin Sawatsky and me. I still wrestle with understanding God’s plan in all this.

Go here for the August 2020 issue of the Evangelical Review of Theology. The article begins at page 218 and has sections focusing on:

The Evangelical Review of Theology is becoming a free online journal, starting with its August 2020 issue. Go here to become a subscriber.