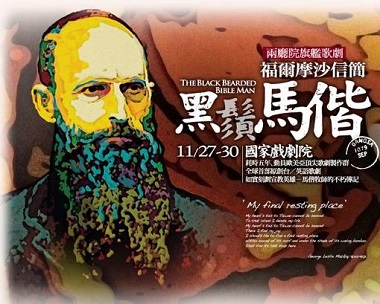 The film ‘Mackay: The Black Bearded Bible Man’ is a reminder of the missionary’s significant role in Taiwan’s history.

Missionary George Leslie Mackay may be long since forgotten in his native Canada – but not in Taiwan. And a film being shown as part of the Vancouver Taiwan Film Festival tells the story. Mackay: The Black Bearded Bible Man will show this evening (June 8) at the Taiwanese Cultural Centre.

Charlie Smith interviewed Cecilia Chueh, CEO of the Taiwanese Canadian Cultural Society about the Presbyterian missionary who spent the last 30 years of his life in Taiwan, before he died in 1901.

“He established more than 150 churches there,” Chueh told the Georgia Straight in an interview at the society’s Vancouver centre on Selkirk Street. “He also founded schools, including the first Taiwanese girls school, and also a hospital.”

According to Chueh, one of those students was a future president, Lee Teng-hui, and schools founded by Mackay educated many other members of Taiwan’s elite.

“He was a hero in Taiwan – 145 years later, people remember him,” Chueh stated. “That’s why many Taiwanese people feel more close to Canada.” . . .

Chueh also stated that her grandfather was a student at a Mackay-founded school and became a Presbyterian minister. This is one reason why Mackay’s story has touched her so deeply.

George Mackay with his wife Chhang-a and their three children.

A lengthy article by James R. Rohrer in the International Bulletin of Missionary Research on The Legacy of George Leslie Mackay underlined how fondly he is remembered in Taiwan:

In Taiwan, where Christians constitute roughly 5 to 6 percent of the populace, George Leslie Mackay remains a widely known folk hero. Every day thousands of people pass by wall-size photographs of Mackay and his students at Taipei’s Mackay Memorial Hospital, one of the most respected medical facilities in the island.

In 2001 the government in Taiwan issued a commemorative postage stamp to mark the centenary of his death.

Presbyterian youth groups can be spotted wearing T-shirts bearing Mackay’s likeness, along with his motto, “It is better to burn up than rust out.”

Preachers in Taiwan frequently draw upon his book, From Far Formosa (1895), for sermon illustrations, and politicians have appealed to his memory to promote various agendas.

The hospital emblem features a red cross and a burning bush, accompanied by Mackay’s motto: ‘Burn out rather than rust out.’

The website of Mackay Memorial Hospital is replete with references to Christian faith and Mackay, from the Superintendent’s statement on the main page (“I thank our Heavenly Father for calling me to the responsibility . . .”) to its profile (“Evangelism: MacKay Memorial Hospital was founded on the basis of Jesus’ universal love . . .”) and its history (“. . . established in memory of Dr. George Leslie Mackay who followed in the footsteps of his Master by coming to Taiwan with the message of salvation for all men.”)

Rohrer pointed out that on Mackay’s second furlough (in 1893), he landed in Vancouver:

. . . the missionary was dumbfounded when his wife and Koa Kau [a student from Taiwan] were not permitted to disembark until a head tax had been paid. Although the matter was soon cleared up, Mackay spent the rest of his time in Canada speaking out against racism and demanding an end to discrimination against Chinese immigrants. As moderator of the Presbyterian General Assembly in 1894, he had a very visible platform from which to thunder his opposition to anti-Chinese prejudice in Canada, as well as his faith in the complete equality of Chinese Christians.

Apparently the movie is based on an opera of the same name which premiered in 2008 at Taiwan’s National Theatre. (It is interesting to note that a 1912 book by Marian Keith of the Board of Foreign Missions in Toronto was called The Black Bearded Barbarian.)

The screening, which is intended to celebrate Canada’s 150th birthday, is free. It is at 6 pm (not 8 pm, as stated in the Georgia Straight article).