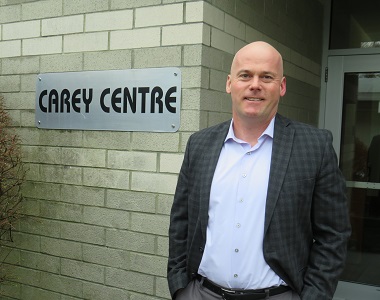 Carey Theological College was at one time nestled quietly among several other theological colleges at the north end of UBC’s campus.

But what was once a campus backwater has become increasingly crowded, with a decidedly urban feel.

The colleges (Vancouver School of Theology, St. Andrew’s Hall and St. Mark’s / Corpus Christi, along with Carey) remain, though one or two of the older buildings have been sold and repurposed and new housing encroaches.

Five multi-storey Pacific Residence buildings are being completed in 2021/2022 just south of Carey, to “help us [UBC] meet the significant demand for on-campus student housing at UBC’s Vancouver campus.”

Dr. Colin Godwin, President of Carey, told me there was a 5,000 person waiting list for housing at UBC last year, and Carey itself had to turn away 170 students. He pointed out that Carey has a long history of housing students, and is keen to pitch in now.

Carey has been active as a Christian residence since 1960, he said, with many students having benefited from the chaplaincy program and Christian programming. “This is a great place for young people; it’s a safe space.”

Though Carey is focusing on providing more housing, its plan is meeting with some resistance from those who want to see the trees on the property retained. 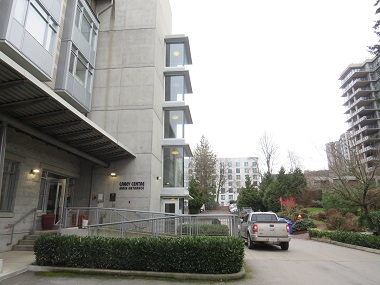 Looking southwest of the main Carey building to Lot 42, the parking lot (and trees) where the six-storey building will go. One of UBC’s new Pacific Residence buildings is just past the lot.

Godwin said he has been planning for this day since he arrived in 2013: “Build on Lot 42, build on the parking lot” has been on his mind all along.

He added that he and his team (including project manager Paul Williams, who joined us in the conversation) have been working intensively on the project for the past three or four years, especially the last year and a half.

The college, he said, has already raised $7 million of the $15 million needed for the project.

A development permit application has been received for the expansion of Carey Theological College. The proposal is for two buildings, a four-storey mixed-use institutional and residential building and a six-storey residential building, to the east and south of the existing Carey Centre at 5920 Iona Drive.

An amendment to the Chancellor Place Neighbourhood Plan is required to enable the approval of the development permit for this proposal.

In a video on the college’s website, Godwin stated: 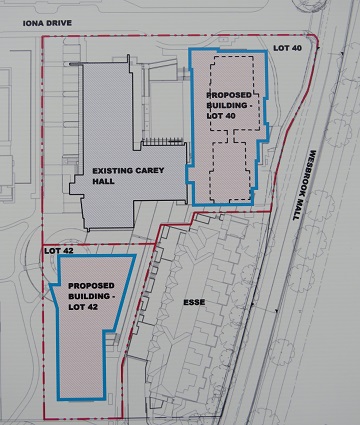 Carey’s current building is limiting our capacity in two ways:

First, our residence program is currently at capacity, and we are unable to meet the demands to disciple more students as they complete their studies at UBC.

Secondly, as our theological college grows, we need more resources, and space, in order to run our interactive online degree programs effectively.

Once completed, the impact of the new building is threefold:

* It will provide additional dorm rooms at affordable rates to house up to 85 more UBC students in our Christian residence.

* It will expand our infrastructure in order to deliver global theological education around the world.

* And lastly, it will generate income to support scholarships and bursaries to train pastors and missionaries from around the world.

The building will include an expanded cafeteria, a multi-purpose chapel and a resource centre for global and Chinese ministry.

All of Carey’s courses are conducted online. Two-thirds of the students are from Canada, mostly in the west, but about 30 percent are now participating from various other nations around the world, especially in Africa and Asia. The college is a ministry of the Canadian Baptists of Western Canada.

Godwin said, “We are on track to triple the number of new course registrations for the 2021-2022 academic year. Many of these are scholarship students that would not have the ability to study otherwise.”

What about the trees? 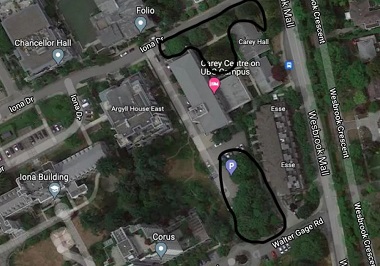 Some trees are to be removed from the circled areas. (Google Maps)

CBC News reported February 14 that there is some resistance to Carey’s project: ‘Thousands sign online petition to prevent dozens of trees from being cut down on UBC campus.’

More than 18,000 people have signed an online petition to try to prevent dozens of trees on UBC’s campus from being cut down to clear the way for two new buildings.

Former student Su Wang, who has lived at UBC since 2012, began the petition after seeing development billboards off Chancellor Boulevard along Wesbrook Mall and Iona Drive on grounds used by an independent theological college at the university.

She says more than 30 trees are slated to be cut as part of the development, including mature western red cedars. . . .

UBC said in a statement that the theological college has applied to expand its facilities at Carey Hall with a new six-storey building on Walter Gage Road and the redevelopment of its existing administrative building on Wesbrook Boulevard with a four-storey building.

The new six-storey building will replace an existing parking lot and result in the removal of “some mature trees,” UBC said.

It said plans for the new buildings aligns with the school’s goal of increasing housing on campus, and also that a tree replacement policy exists. 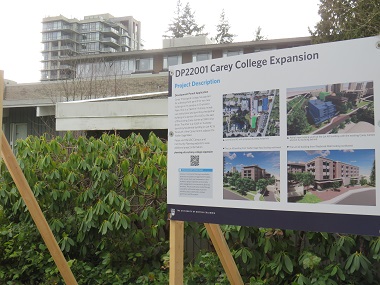 From Wesbrook Mall; the old lowrise building in the foreground will be replaced by a four-storey building.

Two virtual open houses were held February 16. (I attended the first one.) A range of issues were discussed; both Godwin and Williams felt the event went well.

Williams said, “It was balanced, with comments in all shapes and forms. It is important to keep the big picture in mind. We are bringing 132 much-needed student residences.” There are 44 dorm students this year.

A number of the comments, not surprisingly, related to personal concerns of close neighbours – will the building be too close, will students be looking directly into their homes, will site lines be blocked, will a sidewalk be narrowed . . ?

Some also raised the issue of lost trees. Williams acknowledged that the numbers of people signing the petition are “staggering,” and said, “We appreciate the passion shown by these people.” He added, “We are committed to enhancing the green space on this property,” and said Carey is promising two trees for every one lost, instead of the one-to-one ratio required by UBC. 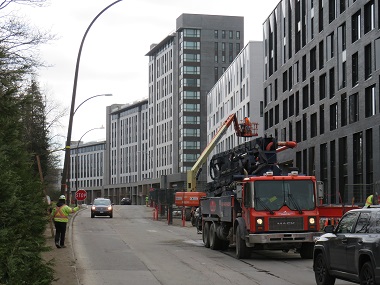 Several people were of the view that UBC has in general been too focused on development, at the expense of green spaces.

In particular, some said, several new buildings along Wesbrook Mall are too high and too close to the road, changing the character of the area. The Carey project was clearly seen by some as part of a larger problem.

Williams has met with quite a few neighbours. “You get into their kitchens,” he said. Sometimes they vent, but they appreciate the opportunity to talk about whether there are “ways to adjust or mitigate” the plans. He feels the responses have generally been positive.

This project will be reviewed by the UBC Development Permit Board March 9.

Godwin said, “We don’t know what will happen” to Carey’s application, but pointed out that they have had “very positive interactions” with the UBC planners, who he described as “very stringent.”

Williams said it is important to remember that this is a multi-year process, and that all elements of the plan have been negotiated along the way with UBC.