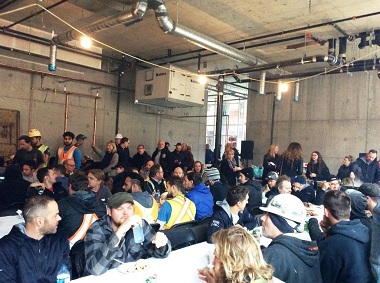 Central Presbyterian Church used its new Community Interface Room to host a barbecue for workers on their high-rise project.

As one long-established church in Vancouver’s West End nears the end of a major redevelopment of its property, another is poised to begin.

The site of Central Presbyterian Church at Thurlow and Pendrell used to be occupied by a rundown brick building that was well past its prime when it was torn down in early 2016 as part of a deal with Bosa Properties. In its place there now stands a 22-storey multi-use facility. 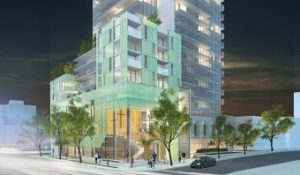 This image of the Central Presbyterian project is from the Henriquez Partners Architects site.

Above them will be a tower containing 168 market rental units. Bosa will sell them and use a portion of the revenues to fund 42 social-housing units for seniors that Central will oversee through a new non-profit housing society.

The construction phase wrapped up this fall. On October 20, the church used its new Community Interface Room for the first time to host a “Topping Off” barbeque to thank the men and women who had worked on the project. As the church’s website noted, “God willing, this is the first of a long series of meals to be offered in this space over the coming decades!”

Central’s pastor, Jim Smith, says they plan to begin worshiping in their new sanctuary in the first week of June.

By then, Westbank Corporation is hoping to have begun an even bigger and much more ambitious redevelopment of land nearby owned by First Baptist Church, located on Nelson directly behind the church on Burrard.

On July 26, Vancouver City Council voted 7-1 to give them the green light to begin construction of a 57-storey residential tower comprising 331 market strata units which Westbank will own. Once completed, it will be the third tallest building in Vancouver. Also part of the project will be a much-needed expansion and seismic upgrade of First’s 107 year old heritage building.

Slated for construction as well will be a seven-storey building with 61 rental units of social housing which the church will own and operate. Connecting the tower and the church would be a glass-enclosed galleria, multi-purpose rooms, a daycare, a garden, a gymnasium and a swimming pool – all of which will be available for use by their West End neighbours.

Recently, Westbank released online a series of short films that explain the late Bing Thom’s architectural vision for the tower and a stunning preview of what it will look like. (Thom passed away last year.)

Construction is expected to continue into 2022.