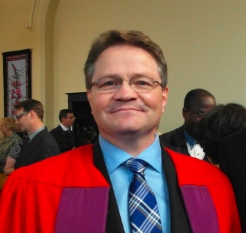 There have been changes at the top in several local theological schools of late. Vancouver School of Theology, Carey Theological College and St. Mark’s College / Corpus Christi College are clustered together at the northeastern corner of the UBC campus – and each school is undergoing a change of leadership. (All the incoming and outgoing leaders  of these schools are Rev. Dr., so assume that title throughout.)

A couple of hundred well-wishers gathered at Shaughnessy Heights United Church on Friday (October 18) to celebrate the installation of Richard Topping as principal of Vancouver School of Theology. 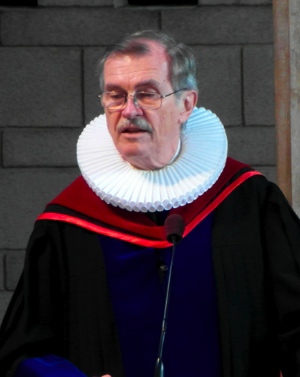 Dr. Darrell Guder, from Princeton Theological Seminary, gave a challenging sermon, which confirmed his reputation as a pioneer in missional thinking. He said theological institutions need to grapple with the legacy of Christendom – a time in which theology was the ‘Queen of the Sciences.’

Pointing out that while Christendom may be over, and theology pushed to the margins of culture, the clothing worn during the installation service – some of the platform party were wearing academic regalia, some ecclesial, some a combination of both – reflected “how deeply rooted we are in it.”

Guder said theological schools need to critically evaluate the church’s history, taking note of the ways in which it has compromised its role. He reminded the assembly that “the church does not exist for its members,” and said the key mandate of schools of theology should be “upbuilding for sending.”

He said that as theologians and the church grapple with the legacy of Christendom, all should keep in mind this biblical injunction: “Do not be conformed to this world, but be transformed by the renewing of your minds, so that you may discern what is the will of God . . .” (Romans 12:2). 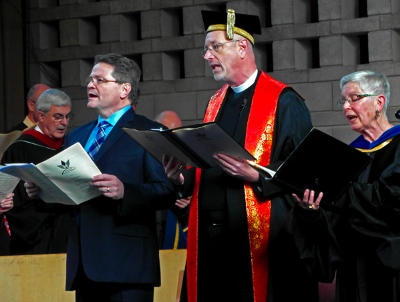 “In the formation of theological imagination,” he said, following Guder’s lead, “we also want to engage the world and the big issues of our time. I think Karl Barth was right that theology ought to be done with the Bible in one hand and the newspaper in the other (although I am pretty sure he didn’t mean we give equal weight to the National Post and Romans in our thinking about God).

“Why engage with the world? because God is engaged with the world, because God so loves the world. God is at work in the world, God is always already active making and keeping human life human – there are little lights and parables of the love of God scattered all over the place if we will attend to the world.”

Topping graduated with a PhD in Theology from Wycliffe College, and served for many years as a minister and then as a professor with the Presbyterian Church in Canada.

At VST, Topping has taught Introduction to Theology, Reformation History, Christian Spirituality and Reformed Theology of the 19th and 20th Century; he has also lectured at Regent College. His publications have been in the areas of theological hermeneutics, homiletics, philosophy of religion, systematic theology and the theologies of John Calvin and Karl Barth. 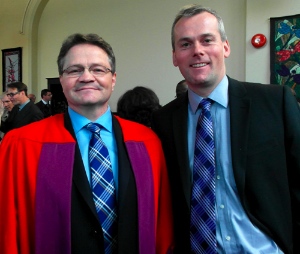 Topping took over the leadership position at VST three months ago from Stephen Farris, who had held the position of acting principal since the spring of 2012. VST is supported by the Anglican Church of Canada, the United Church of Canada and the Presbyterian Church in Canada, though it is open to students from all denominational backgrounds.

Just down the road, Colin Godwin has been president of Carey Theological College (the primary educational arm of the Canadian Baptists of Western Canada) just since July 15. Carey’s Presidential Installation Service will take place November 24.

Colin and Karen Godwin were appointed by Canadian Baptist Ministries in 1996 to work in church planting and evangelism in Belgium. They were subsequently reassigned to Rwanda to serve in leadership development in 2008 and then to Kenya in 2010 when Colin was appointed the Africa Team Leader. His PhD dissertation on 16th century Anabaptist mission from the University of Wales was published by Pandora Press in 2012.

”Colin brings enthusiasm for the training of believers in all walks of life and will also contribute to the missional element that is embedded in the DNA of Carey,” says Dr. George Sears, chair of Carey’s board of administration.

Godwin succeeds Dr. Brian Stelck, who led Carey as president for the past 19 years. 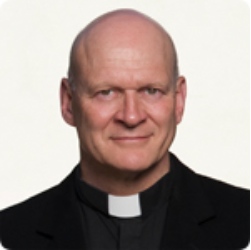 And across the street from Carey, St. Mark’s and Corpus Christi have just lost their leader. Monsignor Mark Hagemoen led the Catholic colleges at UBC until he was appointed last Tuesday (October 15) by Pope Francis to be bishop of Canada’s largest and most northerly diocese.

Hagemoen, who had been principal of Saint Mark’s Theological College and president of Corpus Christi College, was named Bishop of the Diocese of Mackenzie-Fort Smith, based in Yellowknife. St. Mark’s focuses on theology, while Corpus Christi is a liberal arts college; they share their campus.

Hagemoen was born and raised in Vancouver.  He completed the Doctor of Ministry program at Trinity Western University in 2007, and in December that year, Pope Benedict XVI recognized him as a ‘Prelate of Honour’ with the title Monsignor, for his work in the Archdiocese of Vancouver.

At Richard Topping’s installation, it was announced that Hagemoen would have loved to be there, but he had already left Vancouver to get started on his new duties. It is not yet clear who will take Hagemoen’s place. 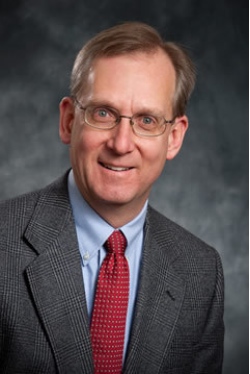 Across campus, Rod Wilson is still president at Regent College, but a new academic dean did join the school this summer. With MAs from Regent College and Oxford, and a PhD from the University of Virginia, Jeff Greenman returned to Regent in July, following a variety of academic roles at Tyndale Seminary in Toronto and Wheaton College in Illinois.

Also at Regent will be the October 26 installation ceremony of Dr. Iwan Russell-Jones to the Eugene and Jan Peterson Chair in Theology and the Arts. Russell-Jones is an award-winning filmmaker, theologian and writer, with over 25 years of experience as a producer and director for the BBC. 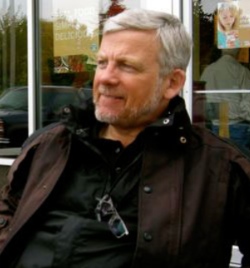 Up the Valley, Bob Kuhn was appointed interim president of Trinity Western University, also in July. A graduate of UBC School of Law and a practicing lawyer for 33 years, Kuhn is no stranger to leadership at Trinity Western.

He served as student body president from 1971-72 and, in 2001, led TWU’s legal team to the Supreme Court of Canada, successfully defending TWU’s Teacher Education Program and overturning contrary decisions made by the BC College of Teachers.

In 2012, Kuhn served as president of the TWU Alumni Association, and the TWU Board of Governors conferred an honorary Doctor of Laws on him in recognition of his service to the university.

Kuhn took over from Jonathan Raymond, who had served as president since 2006.

← Oct 14 – 20: Homelessness Action, Freedom, Forgiveness, Rally for José . . .
Mission as key to unlocking the grand story of the Bible →