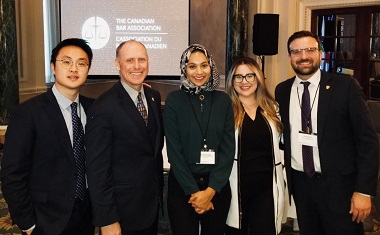 A resolution to make a commitment to religious equality in the legal profession was brought by Derek Ross of the Christian Legal Fellowship, and seconded by Nour Farhat, a Montreal lawyer who is Muslim and wears a headscarf.

We have exciting news! At its annual meeting yesterday, the Canadian Bar Association adopted a powerful statement in support of religious freedom and equality.

In its new statement, Commitment to religious equality in the legal profession, the CBA affirms that: 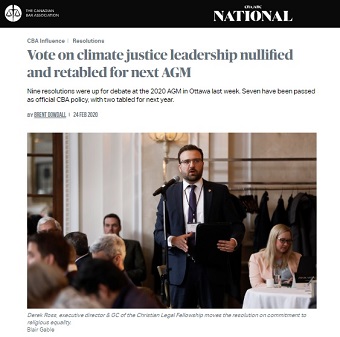 The CBA’s National Magazine featured this picture of Derek Ross as part of its ‘religious equality’ coverage.

The statement commits the CBA “to religious equality and diversity, and to combatting any religious discrimination within the legal profession and against lawyers based on their religious beliefs.”

The statement also resolves to “denounce any law and deter any government policy that denies equal opportunities within, or access to, the legal profession based on a person’s religion, and in particular Quebec Bill 21, An Act respecting the laicity of the State.”

Finally, the statement urges “all government actors and regulatory bodies to respect and uphold the equal treatment of all members of the legal profession without discrimination on the basis of their religion, and to protect religious freedom and religious equality in a manner consistent with the Constitution of Canada, including the Canadian Charter of Rights and Freedoms, as well as human rights legislation.”

Ross also described the role of the CLF:

Many CLF members supported this initiative – from the drafting process, to preparing the resolution for presentation, to speaking during yesterday’s debate. We did so in solidarity with colleagues from diverse religious and non-religious backgrounds, and with the support of the CBA’s Constitutional and Human Rights Section. It was truly a privilege to move this resolution and to witness its passage yesterday. 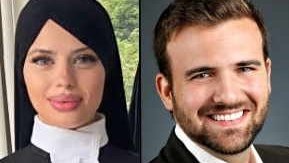 As an example of the cooperative efforts leading up to the CBA resolution, Ross teamed up with Nour Farhat to write Religious inclusion in legal profession an article in The Lawyer’s Daily February 18.

Here is an excerpt:

Bill 21 prohibits entire categories of employees, including many lawyers, from wearing religious symbols in Quebec. For some, wearing a religious symbol is not a matter of “preference” but is a core religious observance. Bill 21 effectively bans them from various spheres of work, for reasons entirely unrelated to merit or job performance.

Bill 21 also disproportionately impacts those religious minorities whose faith commitments involve symbolic expression. Nour wears a hijab as an expression of her Muslim faith. As a result of Bill 21, she is prevented from working for the Quebec government as a prosecutor, a government lawyer, research counsel or in any other position exercising the “function of lawyer [or] notary.” Nor can she work in a legal aid clinic, among other areas.

These broad exclusions have nothing to do with her qualifications, training, capabilities or experience – she is excluded solely because of her religious identity.

Bill 21 forces religious lawyers like Nour to make an impossible “choice”: we can either be true to our religious identity, or we can practise law in our area of calling. We can not do both. Bill 21, it seems, does see a contradiction between being a lawyer (at least in the public sphere) and being religious (at least openly). Even if our religious identity has no impact (or even a positive impact!) on our work, its expression, including in the most benign form, could disqualify us from various practice areas in Quebec.

The CLF is active on many fronts, from supporting law students to organizing conferences and seminars, promoting alternative dispute resolution and intervening in legal cases “where CLF can seek to advance justice, protect the vulnerable, and advocate for fundamental human rights and freedoms.”

Another recent example of that kind of concern is their involvement with the MAID issue.

The Christian Legal Fellowship has also contributed four helpful articles since the beginning of the year dealing with issues of medical assistance in dying (MAID):

Following are some brief excerpts from Ross’s Summary and Analysis of Bill C-7:

Earlier this week, the federal government introduced Bill C-7, a proposed new law which, if passed, will significantly expand access to euthanasia in Canada.

These changes are being introduced less than four years after euthanasia/physician assisted suicide (now collectively referred to as “medical assistance in dying”, or “MAiD”) were first legalized.

Among other changes, Bill C-7 would allow euthanasia to be performed without a patient’s explicit consent at the time of the procedure in certain circumstances.

Ending a patient’s life, without absolute certainty of their consent at the moment of termination, should never be permitted by law. . . .

These same concerns also apply to Bill C-7’s proposed removal of the law’s 10-day waiting period; currently, patients must generally wait at least 10 days between requesting MAiD and receiving it, but this is to be removed by Bill C-7 (at least for patients whose death is ‘reasonably foreseeable’).

Without this provision, there is no mandatory period of reflection ensuring time for patients to consider other options or explore other treatments. Someone could feasibly request and receive MAiD on the same day. . . .

In its preamble, Bill C-7 purports to affirm “the inherent and equal value of every person’s life and the importance of taking a human rights-based approach to disability inclusion”. However, a law truly committed to these principles must ensure that all lives will be deeply valued, and must never be viewed as lacking dignity or less worthy of support.

He said, toward the end of a lengthy and persuasive comment:

In our submissions to courts (and legislators), and in our educational initiatives in our own churches, our role has characteristics of an intermediary or translator, on the one hand, and of a prophet on the other.

We need to make the legal world – not just its processes but also its beliefs and culture, which are not well understood by most outside the legal community – understandable to our faith communities, so that they understand that what is taking place is not so much religious communities being singled out and targeted (although there is some of that going on), but rather the inevitable working-out of a clash of worldviews.

At the same time, we need to make our faith communities’ commitments intelligible to the courts; and in so doing our role will often be a prophetic one – asserting, as prophets always do, the existence of a deeper reality which reframes everything, and challenges both the majority’s perception of reality (and of justice), and the resulting status quo. 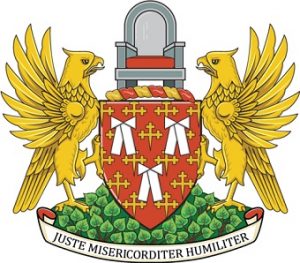 The CLF’s membership consists of some 600 lawyers, law students, professors and others who support its work. It has 14 chapters in cities across Canada and student chapters in most Canadian law schools.

The CLF has been granted special consultative status with the United Nations, and recently received a grant of armorial bearings from the Canadian Heraldic Authority (CHA).