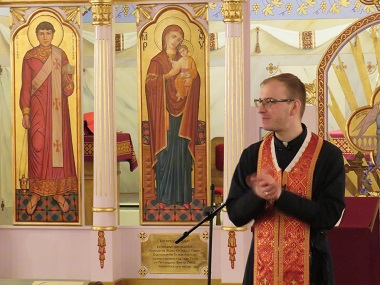 President Vladimir Putin must be shocked by the worldwide intensity of opposition to Russia’s invasion of Ukraine, and the depth of support for the attacked nation.

Many Vancouverites are joining the chorus, with large public demonstrations and much media coverage.

Christians are active participants, beginning with Ukrainian churches, but also in various other networks. Prayer is the common denominator.

Ukrainian Canadians have been watching what’s happening in Europe with especially heavy hearts. Yesterday morning, Father Mykhailo Ozorovych did his best to support his congregation at the Holy Eucharist Cathedral in New Westminster, British Columbia.

A clip from the service began with hymns and continued with comments by Fr. Ozorovych:

In the name of the Father and of the Son and of the Holy Spirit, glory be to Jesus Christ. Today, when our liturgical calendar is . . . Forgiveness Sunday, how can we forgive?

But doing forgiving and forgiving, letting it go and striving even to maybe – like our God, who forgives and forgets our sins – now is an extra challenge for us Christians in this time of war.

How can we forgive? I don’t know. Forgive them, our Lord, for they know not what they are doing.

The prayer that is happening across the world gives that invisible but palpable support to the soldiers and to the people of Ukraine.

And we hear those stories over and over, you know. Soldiers saying, I don’t know what inspires us, what drives us, what helps us. But something is. And it gives a little bit of push for us here to pray harder, to work harder, because it’s the worst where people feel powerless and then they idle and then they drown in their own anxiety, fears, restlessness.

So this is one of the missions that I see right now. How can I help people get organized to help those in Ukraine – soldiers fighting, the wounded, the widows, the orphans and those displaced and those who might be or are already coming this way.

You know, even here locally, when we open our doors for prayer every night at 6 pm, we have Russians from Russia coming and praying with us, saying that we stand with you in prayer, that we are not in support and [are] against what the Putin regime is doing in Ukraine. . . . 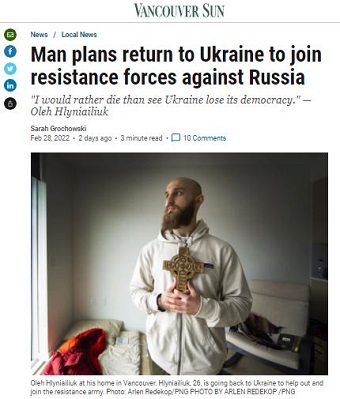 A recent Vancouver Sun article (‘Man plans to return to Ukraine to join resistance forces against Russia’) pointed out that Holy Eucharist Cathedral is doing more than praying:

In his solo mission home [he flew out March 2], Oleh Hlyniailiuk is being supported by congregants of the Ukrainian Holy Eucharist Cathedral church in New Westminster whose donations are paying for the military and medical supplies he plans to bring.

“This brave young man will pack as many suitcases of protective gear as he is allowed,” said Reverend Mykhailo Ozorovych, who says the congregation is hoping to ship hundreds more kilograms of non-lethal military aid.

Holy Eucharist Cathedral is part of the Ukrainian Catholic Eparchy of New Westminster.

Apart from Ukrainian Catholic and Ukrainian Orthodox churches, many other local Christians have connections with Ukraine. 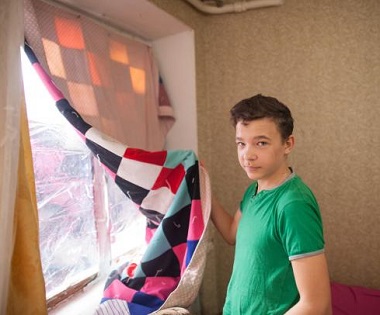 An MCC blanket is used by 14-year-old Slavik Skachkov and his family to block out the winter cold at their new home in Nikopol, Ukraine. The family fled from fighting in eastern Ukraine.
MCC photo/Colin Vandenberg

Many Metro Vancouver / Fraser Valley Christians with Mennonite roots have grandparents and great-grandparents who were forced to flee Ukraine in the early 20th century.

When the Mennonite Central Committee (MCC) celebrated their 100th anniversary in 2020, they remembered those roots.

Though Catherine the Great had invited Mennonites (and other Europeans) to inhabit the land, by the late 1800s their traditional way of life was increasingly under threat.

Persecution worsened under the Communists, especially during the 1930s, when Stalin’s reign of terror was at its height, including state-induced famine in Ukraine.

The MCC was instrumental in supporting the Mennonite communities and in helping them to flee to the West.

Donations to MCC can be made here.

One of those Mennonite descendants is Wes Janzen. A professor of music at Trinity Western University for 33 years, he and his wife Kim also worked with Music Mission Kiev in Ukraine for several years.

Now back in the Fraser Valley, Janzen is keeping up a running commentary on his Facebook page, urging prayer and support for Ukraine. On the afternoon of March 2, for example, he posted this comment and this video:

Share this! This is amazing. This is today, 2022. South Ukraine, along the Dnieper River, the entire town fills the road, facing the Russian attackers. This is an ENTIRE TOWN saying NO to Putin. Can you imagine how confused the Russian conscript youth are, as they drive their tanks, and see this?

This place is very near to where my grandfather lived, where he experienced the horror of 1919, and he witnessed the gruesome death of his entire family as a youth.

This convoy of people has more than my respect! I’m in tears, knowing their courage and resolve, and understanding what they are standing for. 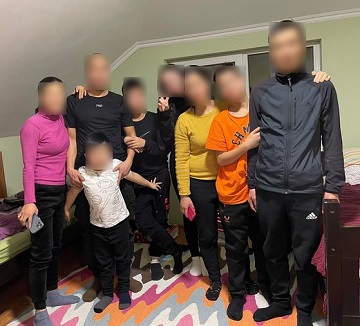 This Vietnamese family has just arrived from Ukraine.

The ministry’s primary role is “providing care, education and jobs that are protecting the world’s vulnerable from human traffickers.” They have been working particularly with orphans who have aged out of state-run orphanages in Moldova.

Many of the 700,000 Ukrainians who had fled the country as of March 2 have crossed into Moldova.

Gary Klassen, national manager for Stella’s Voice Canada, based in Langley, told me, “We have lots on our plate with the conflict in Ukraine,” and asked the ministry’s board chair, Brian Paterson, for an update.

Over and above our own Stella’s Voice residents, we just welcomed these Vietnamese refugees from Ukraine and they are part of 13 refugees in our homes tonight but we’re waiting for 10 more.

This is going to go on as long as this war does but we just need to be full of Jesus for these folks and pray their hearts are touched by the Gospel. Some get here totally shell-shocked. The sadness I saw in one of the girl’s faces is heartbreaking.

The Body of Christ is rallying, and that’s so great to see. We’re also partnering with the Charity Center for Refugees (CCR) to provide kitchen and laundry upgrades to enhance their capacity to serve those fleeing the conflict.

Go here to support the work of Stella’s Voice with Ukrainian refugees. 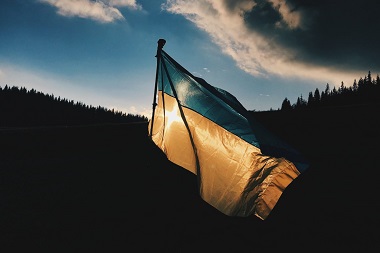 This image accompanied the statement by the Canadian Council of Churches.

In Ukraine today . . . not to condemn the perpetrators and distinguish them from victims is to do the dark work of covering the situation with moral darkness in which ‘all cats are gray.’

So it is encouraging to see that official church bodies are taking quite a clear stand.

The Canadian Council of Churches released A Call for Peace in Ukraine March 1, referring to statements by Orthodox, Catholic, ecumenical and evangelical world bodies:

Churches and people of faith in every neighbourhood, city and town across Canada are raising their fervent prayers for peace in Ukraine. Many Canadians have been remembering friends with Ukrainian heritage, colleagues in Ukraine, or perhaps their own visits to Ukraine. The country and people are now under siege and it is a shock to our collective consciousness.

Along with +Ilarion, Bishop of Edmonton and the Western Eparchy of the Ukrainian Orthodox Church of Canada, we “feel sorrow, shock, anger and are in disbelief.”

With the Ukrainian Catholic Church and the Executive Committee of the Canadian Conference of Catholic Bishops we “encourage the faithful and all people of goodwill to pray for the imminent restoration of peace, dialogue and human fraternity.”

The global Christian community is united in its call for an end to the war.

With His All-Holiness Ecumenical Patriarch Bartholomew we direct our prayers to the Lord Jesus, the Ruler of peace, asking Him with a fervent soul that He “will give strength to His people” and “bless His people with peace” (cf. Psalm 27:11) and we plead for an end to the war now.

His Holiness Pope Francis has invited us all to make 2 March, Ash Wednesday, a day of prayer and fasting for peace in Ukraine. He urged that it be a day to draw close to the sufferings of the Ukrainian people, to feel that we are all brothers and sisters, and to implore of God the end of the war.

World Council of Churches Acting General Secretary Prof. Dr. Ioan Sauca has appealed to Russian Federation President Putin to stop this fratricidal war, and to restore peace to the people and nation of Ukraine. 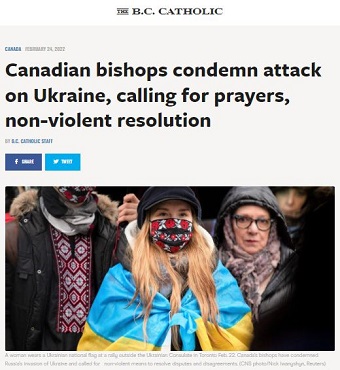 An article in The B.C. Catholic began:

In a statement, the Canadian Conference of Catholic Bishops executive committee said it “condemns the escalation of tensions and violence in the Ukraine marked by Russia’s invasion . . . in the form of militarization and bombing in various Ukrainian cities.”

The bishops offered their solidarity with Archbishop Beatitude Sviatoslav Shevchuk, major archbishop of the Ukrainian Catholic Church, and Ecumenical Patriarch Bartholomew of Constantinople, the primary spiritual leader of the world’s Orthodox Christians.

They are hosting a one-hour Zoom prayer gathering March 3, 8 am, for the crisis in Ukraine and Russia, co-hosted with the Peace and Reconciliation Network of the World Evangelical Alliance. Thomas Bucher of the European Evangelical Alliance will provide a brief report to help us pray effectively for the situation. Go here for links.

March 4 note: Bobby Ross Jr. has compiled a very helpful set of links for more background: ‘Must Reads: Understanding the Russia-Ukraine War from a Religious Perspective.’