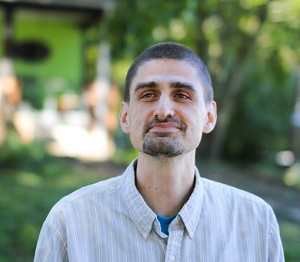 Jonathan Wilson-Hartgrove began his talk about community as he always does – with a couple of traditional black gospel songs. Possibly lacking confidence that his west coast audience (July 10 at Grandview Calvary Baptist Church) would catch on to the beat, he instructed us to clap on the second and fourth beats.

As he led us into a soul-full and spirit-raising song (‘Guide my feet Lord . . . I will trust in the Lord’) he passed on what a friend from his home church in Durham, North Carolina had explained to him: “We sing so that we can join our voices together and be in community.”

In North America, he said, you know something is important to people when all the advertisements seem to be selling it. And that’s happening with community; it’s not so much Pepsi, as it is Pepsi surrounded by smiling friends, that we want.

In that case, he asked: “Why can’t we do what we all so much want to do?” Why is it so hard to make community? Especially in church, which could be the ideal setting for it?

He paused as he developed his theme – ‘Somethings Old, Somethings New: Ancient Wisdom For Communities Today’ –  to point to the Buddhist temple directly across the street from Grandview Calvary. To build a community in a pluralistic society like our own, he said, we need to learn how to talk with Buddhists – if that’s what our neighbours happen to be. About Jesus . . . and about Buddha. Pluralism presents challenges to community, but exciting ones, as those challenges will lead to a greater understanding of what it means to be human.

Wilson-Hartgrove is a leading figure in the new monastic movement (a term coined, as it turns out, by Jonathan Wilson, his father-in-law, who introduced him and teaches at Carey Theological College on the UBC campus).

He pointed out that there is a 1,500 year old tradition of monastic communities in the church. Originally monks lived solitary lives, but in time they began to join with others, culminating in communities bound together by prayer, worship and a common liturgy.

He quoted with approval from a letter Dietrich Bonhoeffer wrote to his brother Karl-Friedrich in 1933: “The restoration of the church must surely depend on a new kind of monasticism, which has nothing to do with the old but a life of uncompromising discipleship, following Christ according to the Sermon on the Mount.”

Wilson-Hartgrove has learned that an integral part of these monastic communities is liturgy, an insight for which he said he is particularly indebted to the Benedictines. From them he learned that “liturgy gives us words to pray when we don’t have words to pray.” This is a resource that must not be neglected if we are going to resist all the things that separate us from each other and if we are going to try to fight injustice – we need to be a part of something larger than us.

Rutba House is a ‘house of hospitality’ that Jonathan and Leah Wilson-Hartgrove founded in 2003. Its School For Conversion is “an education and formation center for the web of friendships that make up new monasticism.” Among other things, it “creates a learning environment in which incarcerated men and women and students from outside prison can learn alongside one another as classmates.”

The hope is that the lives of those involved will be renewed, in prison and out of prison, by the transformation of their minds. Wilson-Hartgrove decried the “domestic crisis of mass incarceration in the United States,” lamenting that the number of people incarcerated has increased an astounding seven-fold in his lifetime. In his state, tragically, authorities look at grade three test scores to estimate prison populations 15 years in the future.

Wilson-Hartgrove said the resurrection was Jesus coming over for dinner and bringing his homeless buddies with him.

This is a striking image. Often when we think of the resurrection we imagine something beautiful, wonderful and lovely. It is, and yet his image of Jesus hanging out with the marginalized, the ostracized, the poor and the sinners suggests that the resurrection – this new life we are to live in community through Christ – is also challenging, hard and stretching.